I Have a Hot Sauce Addiction

But I've mostly overcome it, and so can you. 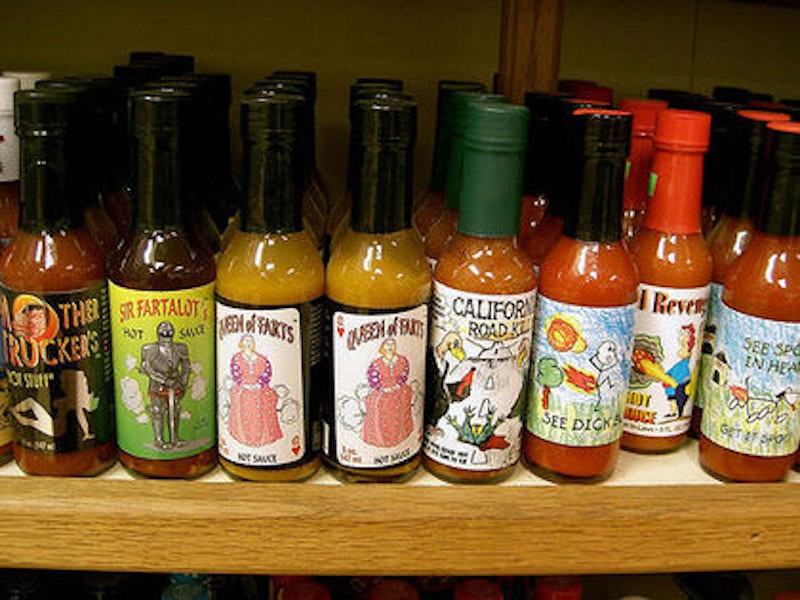 A hot sauce addiction goes beyond simply putting the spicy stuff on everything you eat. You have a dependency when meals begin to revolve around the anticipation of that burning sensation—finding the perfect balance of pungent tastes and physical heat. Chiliheads behave very much like über-carnivores. A meal feels incomplete without the presence of hot sauce just like a meat-eater won't be satisfied without a slab of beef or a chicken leg on their plate. The most common fear is that hot sauce abuse will damage one's taste buds to the extent that their overall sense of taste will be permanently altered. (Luckily, taste buds regenerate themselves so we don't actually have to worry about that.) But what people don't realize is that while hot sauce won't harm you physically, it has a debilitating effect on one's creativity in the kitchen.

Hot sauce makes you lazy. While I was living in Ann Arbor, Michigan I came across Clancy's Fancy, a mild yet remarkably complex concoction of apple cider vinegar, cayenne peppers, olive oil, honey, and ginger juice. There are at least 20 other ingredients listed on the back of the bottle but you get an idea of just how diverse the mixture is. Clancy's packs a little bit of heat even if it’s not high up on the Scoville scale. Its real potency is in its distinct taste, which is due in part to the fact that the sauce is uncooked before being bottled. Weeks after discovering Clancy's, my friends and I were putting it on everything we ate. Rice, pasta, eggs, papusas—everything merited at least several drops of the thick, dark brown liquid to add an extra kick. As my hot sauce use became more pronounced, any thought of cooking with spices and herbs went out the window. I was in the gutter. It's easy to fall into the hot sauce trap and much harder to break free from it. So, here are some tips that helped me overcome my own spell and might just do the trick for you too.

Replacing the Heat
The heat produced from hot sauces comes from the compound capsaicin. It's the active component in all chili peppers that interacts with your body's neurological system. The essential information is that it gives you a burning sensation without actually harming you physically. There are several alternatives to get that same deliriously hot feeling minus the hot sauce.

First, cook with actual chilis. Jalapeno, cayenne, Tabasco, habanero. These are ingredients we hear all the time but usually in the form of some kind of pre-packaged tortilla dip. Just last week my friend Tahar prepared an excellent Tunisian-style shashuka that incorporated several pepper varieties, tomatoes, and eggs. It was both tantalizingly spicy and rich in flavor. And while we had a bottle of harissa on the table just in case, no one actually used it.

The next best way to spice up a dish is to opt for the crucifers. I'm talking about mustards, horseradish, and wasabi. Unlike chilis, their heat only lasts for a short while and affect mainly the nasal passages instead of your tongue. Probably the biggest reason why Americans don't use horseradish and wasabi on a regular basis but do eat mustard, is that only one of them is commonly packaged in a squeeze bottle. We're just not that good at grating roots. Honestly, you'll become a much better cook simply by getting comfortable with grating ingredients.

Adding Taste
Let's be honest, hot sauce adds more than just heat, it makes dishes flavorful. Just like salt and pepper, it can accentuate tastes and provide depth. So how do we please the palate without going overboard on time and expenses? Use some herbs and spices. In addition to peppers, try throwing in fresh stems of oregano, basil, rosemary and sage. You can literally put together any herb combination and more often that not it will be extremely aromatic and taste great.

Seriously, use ginger all the time; you won't regret it. In cooking some rice the other day, I decided to use up the carrots and celery that were sitting in the back of the fridge. I also had a bit of ginger left over from a stir-fry dinner the night before. The end result was a delicious bowl of rice enhanced with a mirepoix (onions, carrots, celery), ginger, and cooked in coconut milk, which made the grains especially fluffy and fragrant. Also don't be afraid to experiment with more exotic ingredients like lemon grass and mint even if you don't have any experience cooking with them.

Surprisingly, a lot of our addictions prove to be beneficial to our health and well-being. Whether it's a caffeine dependence in the form of three cups of coffee a day, which incidentally has been shown to ward off dementia and Alzheimer's, or regularly consuming dark chocolate and wine, whose antioxidant activity reduces the likelihood of cancer. (Although if you're really looking to combat cancer your best bet is becoming an orange juice junkie.) Hot sauce can also be a positive addiction. You'll sweat more, stress out less, and probably develop a rosier facial complexion. But if like me you're more concerned about the damage it can do to your resourcefulness in the kitchen, follow some of the suggestions above. And finally, if that doesn't seem to work at least take comfort in the fact that you can be creative in the selection of hot sauces you choose to douse your food in.