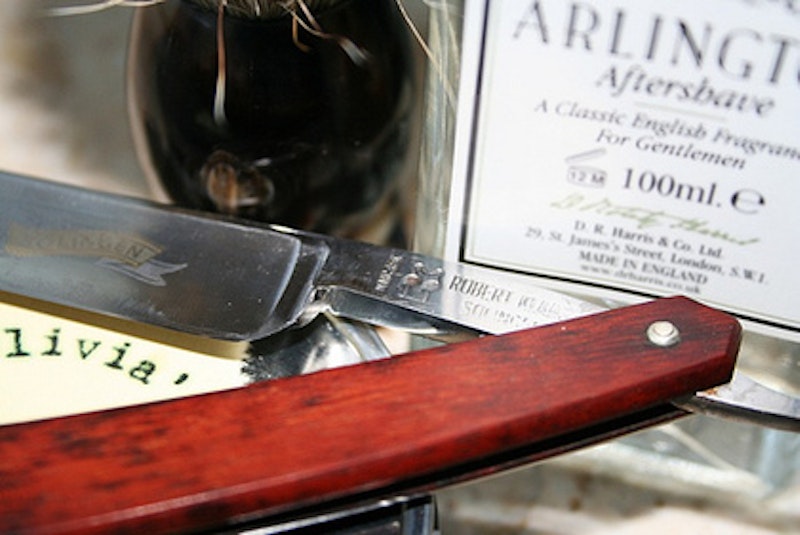 In Harry Harrison’s beloved sci-fi crime novel A Stainless Steel Rat is Born (or in one of its many, near-indistinguishable sequels) a character advises the rat that if you go broke, by no means should you cut out your excessive spending. Economizing and living simply may improve a person’s finances but they also admit defeat and lets creditors know they should take a chunk out of you while there’s a little bit of money left.

I was thinking about this yesterday as I drove back from King of Prussia Mall, having dropped over $100 on high-quality shaving supplies. We’re in the midst of a global depression and we all feel ground down by the indifferent boot of the times. The mood is frantic and grim; the stimulus and bailout packages seem like some incredibly tasteless mummery that in no way will benefit anyone who actually needs benefits, and you can’t open The New York Times without reading tragic stories of rich people having to cut precious days off their vacations and forego Christmas tips for their maids.

But hear me out. Many of you may use Gillette Mach 3 razors. These three-bladed cartridges come in a variety of models, some with pleasantly scented strips and some, I think, that actually vibrate. All of them are monstrously expensive; I’ve been going through Target every now and again and approaching the razor aisle and standing around sighing languorously the same way I used to stand around near the Nintendo games hoping that someone would buy one for me. Replacement cartridges for the Mach 3 are several dollars per, and I sometimes go through two during a single shave. Clearly something has to give.

The kind people of Badger and Blade assure the novice shaver that using a straight razor is not a big deal, and that it requires only about $400 and 40 or 50 steps to get started. All you need is a razor, a honing stone, a different honing stone, a slurry stone, glass backed with microabrasive, a latigo and canvas strop, a four-sided paddle strop, and several kinds of strop paste. This does not, of course, include your lathering kit, which should include a badger-hair brush, a scuttle or shaving bowl and some soap or cream. I own more than one kind of fountain pen wax, but even I found the straight razor shaving requirements daunting, especially given that you can give yourself permanent scars and that if you buy a razor you usually have to mail it off somewhere to be sharpened, because apparently the manufacturers just make it kind of sharp. This is all funny to me because I think we’ve all seen cowboy movies in which people sharpen their razors on their belts or sleeves and I don’t think these guys carried around several hundred dollars worth of precision metallurgical equipment. The straight razor discussion also has the Ron Paul, old-guy-on-the-Internet hilarity associated with people telling you that you can save money by ordering gold-plated razors from Germany.

Anyway, straight razor shaving is probably really great but since I am not retired or a 1930s detective I thought it would be better to adopt a method of shaving that requires less of a commitment than a part-time job. That’s where safety razors come in. These basically look like really butch metal versions of cartridge razors, and they accept disposable double-edged razors blades. You’ve probably seen these razor blades on Myspace or on Intervention—they’re small, flexible, and have a butterfly-shaped cutout in the middle of them. They also generally cost only about 50 cents, often less, and they supposedly last a week of daily shaving.

The most popular brand of razors (by razors I mean safety razors, the handle and holder for the blades) is Merkur, from a German company that makes their razors from heavy metal. Merkur razors look like you could take them to war and since they have few moving parts they probably will be around long after you and I are dead. This is all pretty straightforward. If you can confine yourself to one razor and simply keep buying blades you will save money compared to using cartridge razors. It’s not impossible to find 100 razor blades for under $20 on the Internet, and if you use each blade for five days (you could probably go longer) you will have shaved a lot of money off your yearly razor budget. A little fine shaving humor there, no charge.

Also, if you want to be a true shaving fag, you need a badger-hairbrush. You can get boar-hair brushes and synthetic brushes but you really should probably go straight to badger. I tried a boar brush at first and it was neat but the badger brush makes the whole experience totally different and much better. What you do with the brush is create lather, a process that many of you may have seen in The Three Stooges. A good brush holds moisture and lather very well, and badger hair, for some reason, is best for this. The badgers, by the way, come from China, and they lose their hair in the course of being eaten by Chinese people. Just FYI.

Anyway, take your badger hairbrush and some lathering shaving cream or soap, get a mug and create a lather that to brush on your face. The shaving nerds get a little bothered here and start talking about exfoliation and the sensual feel of the bristles against their tender throats. It’s pretty neat, I’ve tried it a few times and it’s less irritating to the skin than using a cartridge razor and canned foam. I wouldn’t call it a revelation but it’s much nicer than the alternative, plus it gives you the chance to learn an antiquated and fussy skill and to bore your friends and co-workers at lunch. You can get an adequate Van der Hagen shaving kit at Bed, Bath and Beyond if you need one right this minute, or you can use one of the bafflingly large variety of web-based fine old-fashioned shaving products stores (classicshaving.com is pretty good for brushes and razors, and saintcharlesshave.com has some unambiguously delightful soaps, and surprisingly effective boutique deodorant). Perhaps by controlling the moisture content of your lather and refusing to line the pockets of the murderers at Big Razor Cartridge you can gain a sense of control and peace, and certainly experience the delightful feeling that comes from wasting money.