Service With a Word Crime

A local Dunkin Donuts confuses “U” for “you.” 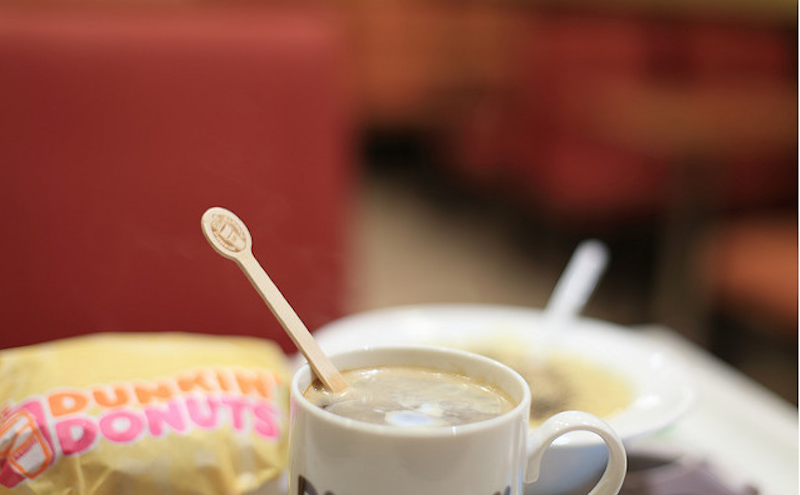 There’s something to be said for customer service that goes above and beyond. In our plugged-in age, there’s nothing unusual about receiving fast food or chain restaurant receipts that double as data-gathering opportunities disguised as conditional coupons. What is unusual: when receipts are accompanied by little pseudo-personalized paper slips that (in part) reiterate the receipt-as-coupon concept.

Dunkin Donuts drive-through cashiers have been pretty generous with these slips lately, and it’s cute—especially when they don’t bother to include their names in the spaces to the right of the “Your Server” identifier at the top of each slip. This is cute mostly because half of the slip, the top half, is an entreaty to rate the service of your server on a website based on a five-star system, but if you don’t know who your server is—they do mention their names in passing, I’m terrible with names—it’s impossible to do that server any justice, ratings-wise, on the site.

Each blindingly golden-yellow slip asks the same question, trailed immediately by a statement designed to encourage website patronage. It’s a reasonable enough question, the kind of innocuous question you might ask strangers in a mall if you were wandering around holding a clipboard with a pen and a survey attached. Here are the question and the subsequent statement: “Did U receive your ‘5’ star service today? Let us know U were highly…’5’…satisfied.”

There’s some light sexual innuendo here that I suspect was accidental or inadvertent on the part of the copywriter. The statement is missing a period, which I’ve added; presumably, in all the supplemental repeat-business excitement, punctuation fell by the wayside. These are minor offenses; entrepreneurial-minded laypeople and huge multi-national conglomerates make stupid grammatical and spelling errors all the time. But the use of “U” in place of “you” really bothers me in a way that’s hard to shake or square. I received a good dozen of these golden slips before finally taking the time to read one, and when I did, that “U” hit me like a brick to the skull: the flighty, text-message puerility of it, the la-de-dah laziness of it, the sheer pre-teen chutzpah, as if we’re suddenly one nation under blog, uniformly giddy 12-year-old girls lost in the digital blur of our Twitter accounts. It’s not as if the layout of the slip would have been compromised, in text terms, by writing the word out; the font size could have realistically remained the same. It’s not even clever shorthand, and it might be argued that the linguistic crimes committed on this entreaty don’t actually extend far enough into inanity. Because, really, if you’re going to go down this particular road, why not re-christen “Dunkin Donuts” as “DNKN DNTS” and shorten “your” to “UR” at every use, so that each visit can remind customers of especially insipid P!nk singles?