Saving the Bay One Oyster at a Time

The more people are involved, the faster we can ward off catastrophe in the Chesapeake Bay. 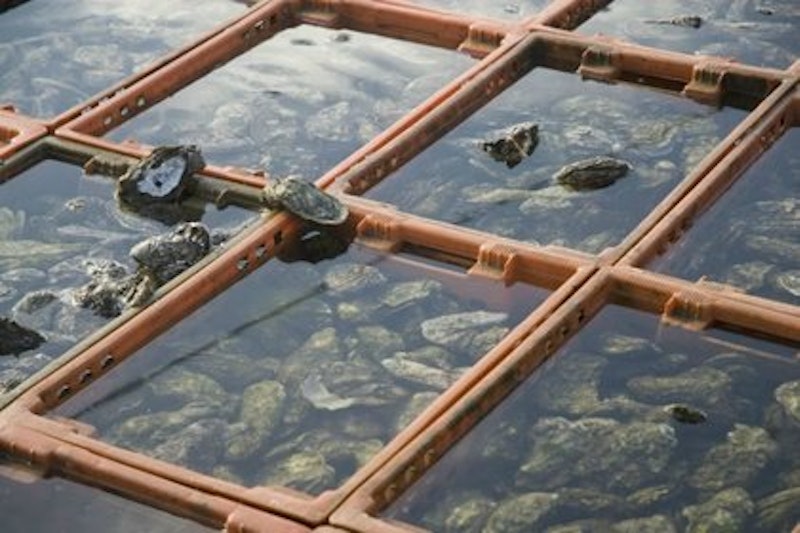 Last week I went to the Oyster Social. The oyster recovery program is a great cause but I really attended to pay back my karmic debt. Last year I went with two friends. We ate the terrific hors d’oeuvres and enjoyed the open bar. After we grazed and drank, everyone starting sitting down to listen to the presentation. My friends and I snuck out the back door and through the alley laughing all the way. We were just having too much fun to sit and listen to serious ramblings.

I’ve felt guilty ever since and so this year, I decided to pay up. I went, I drank, I grazed and I listened. I found out it’s tough to be a little oyster in the Chesapeake Bay. At the turn of the century, oyster harvesting was at its peak. High harvest was around 15 million bushels. In 2010, the annual harvest was 185,245 bushels. The Chesapeake Bay was once world famous for its oysters. H.L. Mencken once described the Bay as “an immense protein factory.”

Oyster stock collapsed because of disease, habitat loss, declining water quality and historic overharvesting. Maryland has now embarked on a program to foster citizen stewardship and support efforts to restore a healthy oyster population and ultimately help clean up the Bay and its tributaries. The Maryland Grow Oysters Program is a cooperative effort between the Maryland Department of Natural Resources, the Oyster Recovery Partnership, other NGO’s like Midshore Riverkeepers and everyday citizens. Participants grow oysters in wire mesh cages suspended from their piers for the first year of the oyster’s life. At the end of the 12-month growing season the oysters are placed on reef sanctuaries located around the Bay that will be left untouched and un-harvested.

Even though Oysters Rockefeller was served at the social, the key role of the oyster was not a food source but rather a filter for sediment and pollutants in the water. A mature oyster can filter up to 55 gallons of water a day. Scientists estimate that oysters were once able to filter all of the water in the Chesapeake, removing water-clouding sediment and algae, in a matter of days. It takes today’s depleted population about a year to do the same job. The recovery program also partners with shell recycling companies that have recycled over 30,000 bushels of shell to produce homes for the hatched oysters. Trucks pick up shell from hundreds of restaurants, caterers and seafood wholesalers in the Baltimore, Washington and Eastern Shore of Maryland areas.

Shell is an extremely limited resource yet valuable for reef restoration. Natural shell makes the best material on which to raise new oysters and the reefs provide habitat for hundreds of other species. The more people that’re involved, the faster we can ward off catastrophe in the Chesapeake Bay, which is receiving pretty poor marks on its most recent report card. Anyway, I’m going to be an oyster gardener this summer on a friend’s vacant property that has a dock. There is no cost and the rewards will be both personal and ecological.