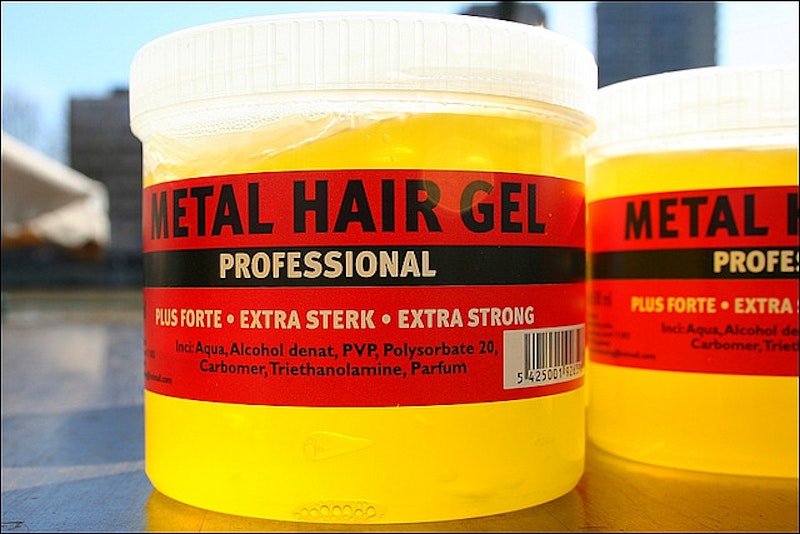 The weekend manager at the IHOP we frequent is a stout, astute gentleman in his early 40s. I wouldn't categorize him as a fussy dresser, but he dresses with a level of care commensurate to the position he holds. You get the sense that, hey: this is someone you can count on. He probably has a family and no shortage of personal responsibilities. We haven't had a real conversation so far and probably never will, but if we did, I would feel compelled to ask him about his hair in an exploratory, non-judgmental way, mostly because I don't understand why he disfigures it into patchy Astroturf.

Why would a 40-year-old man—or even one who’s 30—spend five to 10 minutes in front of a mirror every morning, slathering his hair with gel or mousse and angling it into ostentatious, gravity-defying positions, only to emerge from his domicile as if everything's normal? This is beyond my ken, and I'm no square: it's not like I'm flummoxed by the reality of pensioners with dye jobs and tattoos. Those aren't choices I'd make, but I'm capable of respecting anyone's right to make them. But desiring a coif that suggests a mohawk, a mop-top tousled by a gale and then freeze-framed, a duck's ass, or any of thousands of Vidal Sassoon-sponsored variations is hardly hip, or cutting-edge, or admirable—unless you're knocking back vodka shots with your homies en route to a club or pub crawl. At least in that case you don't have to worry about a wilting 'do after a couple hours.

Seriously: if you're gelling like your life depended on it every damned day, you may as well be a sixtysomething cougar rocking hip boots and Paris Hilton sunglasses, or throw Botox parties on the regular, or be Jared Leto. You may as well don pork-pie hats indoors or personally air condition the skinny jeans you should've steered clear of in the first place. You are somehow less defensible—astonishingly, from a modern perspective—than anyone with an unhealthy attachment to activator fluid.

I will openly laugh at you before I will laugh at a dude with a Van Dyke beard who, for reasons he doesn’t understand, keeps a pocket-sized grooming kit on his person at all times and excuses himself on occasion to fastidiously tend to errant or impudent follicle eruptions. Think about that the next time you're squeezing a huge glob of Brylcreem into your palm en route to perpetuating your hairline-deforesting rain of terror. Dweeb.