A tomato just isn’t a real tomato unless it’s summertime. 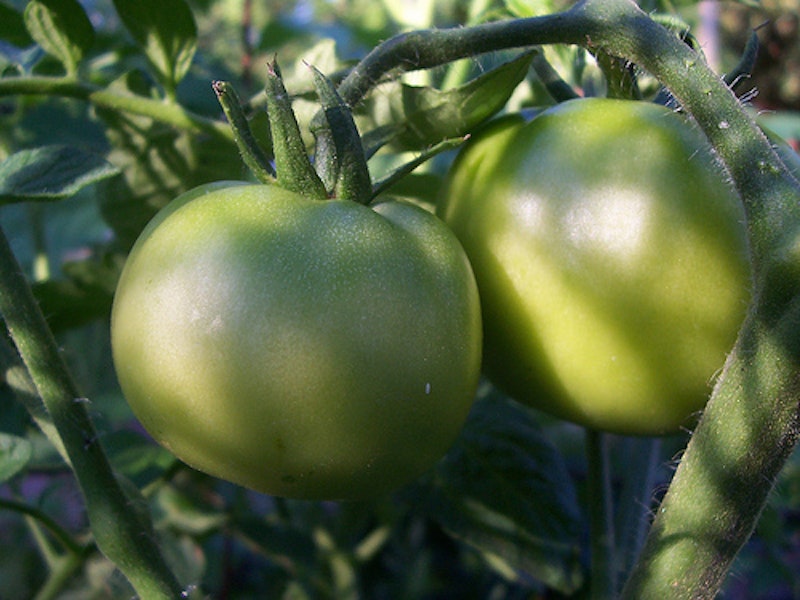 One evening, 37 years ago, as three of us were sitting in the living room at our Lawrence, New Jersey house, cradling plates of franks and beans, watching the incomparable (for those pre-cable times) Maude, my brother Doug tossed out a curious idea during a commercial. It was mid-April, and in the spirit of Stewart Brand’s The Whole Earth Catalog and the transformation from protesting in the streets to isolated self-improvement, Doug suggested that he and I try, for the first time, to grow a garden in the backyard. Mom, who was usually beat after coming home from work at Princeton University’s Firestone Library—very recently widowed, this was her first job since toiling at a Manhattan lunch counter in the late 1930s, aside from her extraordinarily successful cottage industry of writing jingles for various companies—perked up at the scheme, relishing the thought of bushels of Rutgers tomatoes later that summer.

Doug was pleased at the enthusiastic reception—I feigned excitement, although it was clear he’d be the general in the operation, and I’d get all the scut work, just a plug with a shovel and dirty work boots—and, never shy about adding a fillip or two, then totally cracked me up with his next idea. “We’ll get a lamb tomorrow,” he said, “which will cut down on Russ’ mowing the lawn, and feed it like a horse.” Mom was tickled, just for the exotica of having a pet that wasn’t a dog, cat, turtle, hamster or bird—after raising five boys, she’d had her fill of ordinary animal tenants—but was crestfallen when my brother completed his thought.

“Then, in October, we’ll butcher the lamb and have a seven-course feast, with chops, stew and tomato and red pepper ragout.”
I was on the floor, laughing, and was completely game, but Mom just said softly, “But honey, you know we’ll grow fond of the critter, and I don’t think I could bear eating it.” Doug, who’d just returned from a two-year Peace Corps stint in Kabul, where he’d learned several languages as well as Afghan cooking, grew a little short, explaining that’s just the way of the world, and why the heck did she have to be so … American. Mom and Doug were a bit tipsy, and knowing this conversation could rapidly devolve into unpleasantness, I diffused the situation, and explained to our mother that he was joking (directing a hairy eyeball at my older brother), and of course no such act of cruelty would take place, but hey, let’s think about what we’re going to plant in our hippie garden. Suitably mollified, Mom soon toddled off to bed and Doug and I made plans for the weekend, which would include stops at a Trenton nursery for starter plants ad tools. He was still a little miffed that Leon the Lamb wasn’t in the cards, but I poured him another whiskey and we spent the next couple of hours talking animatedly about the Watergate hearings, which were getting juicier every day.

I was reminded of this teenage interlude the other day upon reading an article in The Wall Street Journal detailing the numerous varieties of hybrid (as opposed to heirloom) tomatoes and how purists are up in arms that either their business or hobby is being corrupted by greedy sorts trying to make a buck by keeping Whole Foods stocked year round with the fruit. I’m old enough to believe that the very idea of buying produce that was once confined to seasons is absolutely appalling, although the Mexican-grown tomatoes my wife bulks up salads with in the winter are, to be fair, pretty tasty. At least compared the hothouse bullets that used to come three to a pack, tasted like Styrofoam, and further corrupted our helter-skelter refrigerator in the 1960s.

Still, Anne Marie Chaker sums up the gold standard perfectly: “Eating home-grown tomatoes that have delicately ripened on the vine (and not been battered in shipping) is one of the best eating experiences money can’t buy. Just add salt, a little olive oil—or nothing at all.” My mother was hard-core: she’d demolish a fat tomato on a sweltering day as if it were an apple, oblivious to the juice spilling down to her blouse and clam-diggers. (As I’ve noted before, Mom wasn’t much of a cook but she loved food: on occasion she’d treat me to a hot dog and plate of fries at the Woolworth’s on Huntington, New York’s Main St., and we both loaded up on the kraut and hot mustard and got messy as hell.)

At one time, at least in the Northeast, you ate what was in season, which meant grapefruit, tangerines and oranges in the winter from Florida, and never in the summer months; Winesap, Delicious, Golden Delicious and Macintosh apples from early September to maybe November; and cherries (a short window) in the spring, as with asparagus. The jackpot was July and August—at least on Long Island, where I lived until I was 17—when our table was filled with kitschy bowls containing plums, peaches, tomatoes, berries and every night, ears of silver-queen corn. Funny, looking back over the years, I can’t remember the last time I polished off an ear of excellent corn—eating from left to right and back, imitating the carriage return of a manual typewriter—but the stuff we get today for barbeques is mush, mush, mush.

Anyway, as anticipated, during that spring of ’73 I was the grunt digging up a patch of land while Doug chastised me for not properly coordinating the irrigation grooves. Nevertheless, our garden, defying all predictions, was a smash: 30 plants that eventually yielded hundreds of plump tomatoes; lots of green peppers and even some pretty decent Bibb lettuce, although rabbits put a dent in that crop. Doug was justifiably elated—and even gave me some credit—and was disappointed only in the complete failure of the jalapeno peppers to work out. I have no recollection of the arsenal of pesticides that we used to ward off bugs, but the Green police would probably arrest us today if we used the same—and standard at the time—methods.

Just before I went off to college that fall, we did have the promised Afghan feast, inviting a few neighbors over to join us on the floor for a long dinner that was truly outstanding, even if the lamb was purchased from a fancy butcher in Princeton. Growing up on a very pedestrian diet, Doug’s skills were a revelation: I was introduced to cardamom, coriander, saffron, learned that yogurt (the non-Dannon variety) was actually delicious as a condiment, tried sticky rice with almonds, apricots and pine nuts, eggplant salad, pomegranates, kebabs, leeks and for the first time, drank beer with the meal like an adult, and not out in the woods with some buddies. Oh, yes, and ate so many tomatoes (and sauces made from them) that my already red-faced complexion turned absolutely frightening.