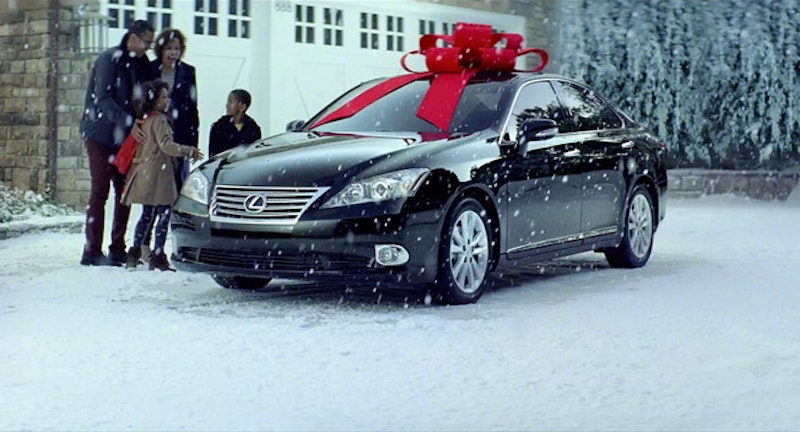 A teenage boy, who has received an electric guitar for Christmas, plays the Lexus theme by accident while trying to suss out the chords to “Enter Sandman.” This is misinterpreted, woefully, by mother and father both, who—following some madcap tussling and hustling and broken ornaments and an inexplicable doom metal rendition of the Lexus theme—emerge to discover that they remain the proud owners of a birdshit-streaked Toyota Tercel.

Santa Claus makes a big, exaggerated show of trying to fit a Lexus onto an already overburdened sleigh, then gives up and turns the Lexus over to Mrs. Claus, who is beside herself with gratitude and has no idea that her good fortune was borne of Santa’s exasperation, an emotion usually foreign to the man; this is unlike him.

Mom, son, and daughter slip Dad a not-quite-lethal dose of GHB that permits them to give Dad the same Lexus they gave him three Christmases prior, lovingly tied in the same oversized red bow.

One spouse springs the "I totally bought you a Lexus for Christmas" reveal on the other, but then when the couple gets outside, that limited-edition, exclusive Lexus coupe and oversized red bow are just gone; someone has left a Guy Fawkes mask and a used Occupy Wall Street condom in their place.

One lover leads another outside on a wintry morning, lips bitten, breath steaming, a sort of giddy excitement infecting the whole scene, which is kind of prolonged, involving bed head and the half-awake donning of housecoats and scarves and ear muffs. And then lo, in the driveway: a Lexus! But the Lexus is drenched in sacrificial calf’s blood and someone has used the accompanying oversized gift bow to lynch Jerry, the security guard, who was filling in for Mike.