Is “Forever Lazy” adult infantilization’s final frontier, or something more? 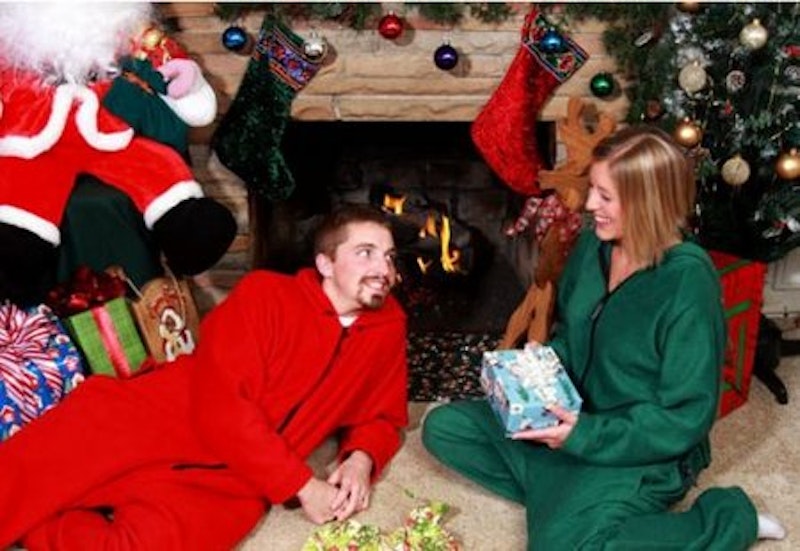 If The Snuggie legitimized the idea of vegging out in fuzzy fabric cocoons of varying colors and patterns, Forever Lazy lowers the bar by re-branding and re-packaging the footie’d, potty-trap door pajamas favored by infants and toddlers as den/basement/man-cave lounge-wear for adults who should know better. One turns to Forever Lazy, then, when sweats or one of those stupid sweater/housecoat hybrids or, like, one’s underwear simply isn’t leisure enough, when one is in deadly earnest about the one’s intention to literally spend an entire weekend consuming pork rinds and watching professional sports, meaning: no egress, no trips to the mailbox, no acknowledgement of neighbors, visitors, and/or solicitors, even if that acknowledgment would be beneficial in terms of self-interest, no resistance, all surrender. Buy into the fantasy that you’re part of the 1%: occupy your Barcalounger.

Mocking the commercial is easy, and it might be argued that mockery or mirth is the whole point, as derision translates into revenues far more easily than most of us care to admit. This is actually dangerous to think about, because while it presents as a parody of human behavior—the dude strumming the guitar slays me every time—repetition breeds a kind of begrudging contempt, such that after the fifth or sixth viewing a brainwashing sets in to where it’s not like you’d order one of these things, but if one were purchased for you, you wouldn’t reject it.

And though it’s creepy to contemplate troupes of slack-jawed chuckleheads clad in identical Forever Lazy get-ups out in public, you know, laughing and taking pictures and laying into chili dogs and doing normal social stuff except that they’re rocking adult versions of children’s night-wear, it’s even creepier to note that there’s precedent for this idea—think of historical renderings of hooded druids in hordes, of those 70s/80s future-fic movies where everyone’s unfailingly and causally clad in shiny, skintight spandex. So laugh all you like today, but recognize that the undisciplined, nihilistic quicksand of fashion might laugh louder, later.