Philly is now the place to stretch out with a laptop and soak up hours of café time. What happened to New York? 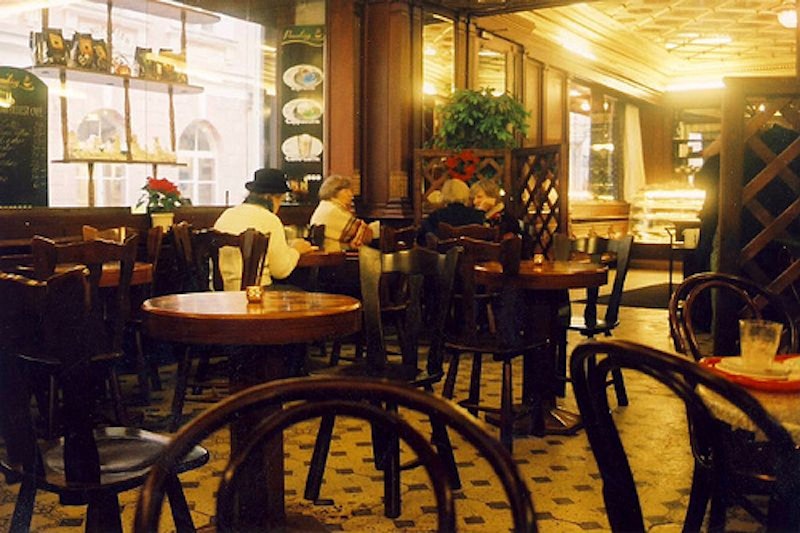 In my view, a city is defined by its coffee shops. As Madison Moore explored last week, coffee shops are meeting places to ogle and be seen, work and eavesdrop. They make the city less lonely.

New York has always, in my mind, been associated with coffee shops. Growing up in Jersey, I would go to the city with friends and go out on the town, but also coffee shop around. On break from college in Michigan, I'd do the same. It's not just me. A generation of people has grown up with television shows and films romanticizing this experience—for me Woody Allen films, Felicity, Sex and the City and even Friends all played a part in creating this New York imagery.

No more. New York coffee culture is dying, especially in Manhattan. I used to be able to venture down to the Village, East or West, and find a café to sit and do work. I had numerous options. But on a recent trip to the city, I found myself hobbled by obstacle after obstacle. Coffee shops serving food and free wi-fi stopped offering one or the other, wi-fi networks in general were either not working or closed down, and because of the relatively small number of cafés, any decent place was too crowded to find a seat.

So what, right? New York is hard; deal with it, one might say.

Sure, but my troubles reflect some fundamental problems with the way the city has been run over the past couple of decades, showing us how something has been lost to the city's rise to riches—a public sphere, perhaps, to abbreviate and simplify philosopher Jürgen Habermas.

Let me describe the perfect coffee shop: 1) good coffee, 2) free wireless, 3) outlets for computers and other electrical devices, 4) plenty of seating, and 5) diverse food options (warm and savory to cold and sweet). Everything else is gravy: good music, abundant light and soothing decor are all optional.

New York coffee culture has definitely cramped down on what I consider most valuable, next to the coffee itself: free wi-fi. Stories abound about business owners cutting back on the apparent luxury, much to the ire of its customers, especially students. I don't blame them, really. The truth is wi-fi makes customers take up space without buying anything. Who wants that?

It isn't business owners' fault. New York's refusal to regulate the rise in real estate prices has made it economically unsustainable to own and operate a successful coffee shop. The sacrifice of Manhattan real estate to developers and corporations at the expense of the middle class (in particular, those tied to the education systems like teachers, professors, and, indeed, students) reached a crescendo with the sale of Stuyvesant Town, an enormous lot of downtown real estate, for $5 billion in 2006, a deal which has now gone horribly awry, marking, in many ways, the climax of gentrification in Manhattan.

But despite the housing downtown, the consequences have already been felt. Coffee shops are one such casualty. Rents are simply too high to allow people to sit and relax. Instead, New York is now restaurant-focused. People sit down, eat, pay and go. The perfect consumer experience. It's like running a bank. People give you money and get the hell out. None of that sitting around, talking, thinking and learning mess.

Despite the financial difficulties, there are models for success, showing shop owners that it isn't impossible to make money in Manhattan. Think Coffee, originally from the NYU area, seems to have a new branch every year. The fair trade/organic café has a recipe for success: be everything to all people. They offer free wireless, dessert and entrees, lots of seating (at the flagship), wine and cheese, live entertainment and plenty of outlets for computers. By offering high-margin items like food and wine, they can accommodate those people who only want a coffee and a place to sit and write.

Think Coffee is in the minority, leaving New York with little to brag about. Meanwhile, other cities are one-upping the great cultural metropolis. In Philadelphia, the economics of opening a business has led to a flowering of cafés. Within Center City, Philadelphia's downtown, I've counted at least two dozen coffee shops with free wireless; some have food (one sells crepes), great dessert (another focuses on cheesecakes), or offer everything under one roof (Chapterhouse takes the prize). All of this within an area roughly the size of the East and West Village, where I can count no more than ten similar offerings.

How did Philly one-up New York? The main reason is gentrification happened slowly and with less force in Philly. Large buildings downtown (brownstones mostly) were still selling for way under $1 million as recently as eight-10 years ago. Downtown has only recently become chic. This means young people and couples, looking for an affordable urban experience, have flooded the area, snapping up adorable, classic homes for as little as $300,000—where comparable properties, in size, quality and location, would fetch well over $1 million in New York.

How can New York change course? I'm not sure. Certainly maintaining rent control, which Mayor Michael Bloomberg has sort of done, helps. But New York will not be able to say no to pricey development—and such developments (luxury buildings, etc.) are at a standstill anyway. Guaranteeing "affordable housing" in these buildings has done little, especially since "affordable" in New York is obviously a joke. In truth, broader generational changes—boomers selling their apartments and moving out—and economic shifts—the scaling down of the banking sector—will need to happen in order to make Manhattan comfortable for small businesses again. Something is always lost and something gained in these situations. In truth, New York will likely have to get "worse" in some ways in order to get "better" in others. It all depends on what you value most.