The Shop That Gives

Where would we be without our cafés? 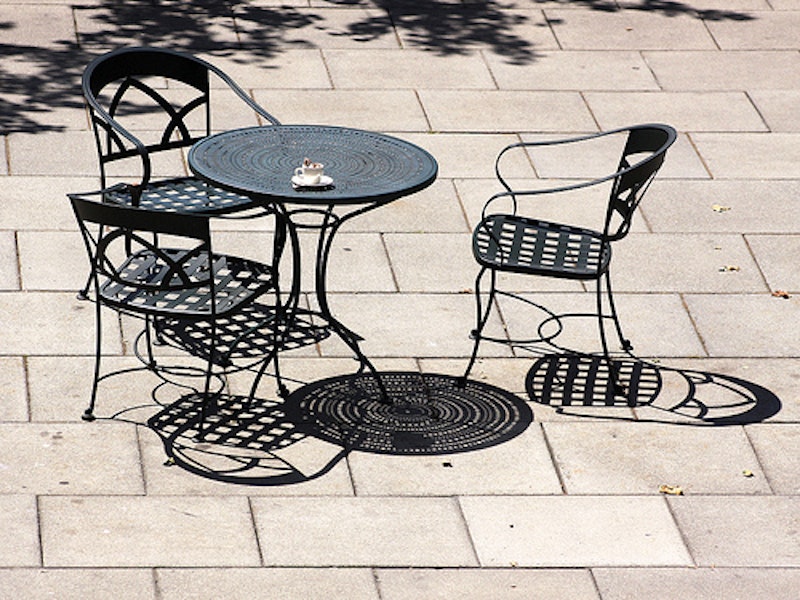 Right now I’m sitting in a hot Brooklyn coffee shop. The baristas don’t know me by name, but they do know that I always order an orange juice, a piece of chocolate chip banana bread or a Jasmine tea. I come here just about every day, and I stay for hours and hours, reading, writing, blogging, chatting.

Most grad students probably do their all-important doctoral research in libraries. But I hate the library—it’s just too quiet, and there’s not enough stuff to look at. Plus, the library doesn’t play weird hipster music you’ve never heard before. All in all, I have probably spent more than 10,000 hours over the last eight years writing final papers, responses or reading articles in coffee shops. And I don’t even drink coffee!

The thing I love about coffee shops, especially the ones in New York, is that there is a whole culture around them. You know the kind of people who go to coffee shops—Hipsters, People Dressed in All Black, Vegans, Yoga Fanatics, Dudes and Chicks Who Play in Bands, “Artists,” anyone with MacBooks or iPhones, and other folks who have way better things to do than be completely trapped in an office all day. The Creative Class. The café is to the creatively minded like the sports bar is to the jock!

The other thing I love about coffee shops is that nobody is afraid to air their dirty laundry, right next to you. It’s like eavesdropping on a therapy session. If you need material for a novel, go to any New York coffee shop and you will learn the intimate details of the folks around you. I mean things you just can’t make up. They talk loudly about the ex who broke up with them with a text message, a failed three-way with a magician from Craigslist, or how much coke they did the night before.

Unlike most other urban areas with coffee shops, nearly everyone who goes to cafes in New York is fabulous—they are either fabulous themselves, or else they do something fabulous at work. I have seen celebrities at Think Cafe by NYU and at Doma in the West Village. I have seen Vampire Weekend at my Brooklyn coffee outpost. I love that people always get dressed up and wear their hottest clothes to study in cafes. Because you never know if the person behind you is an agent at Wilhelmina Models, a talent scout, an editor at Vogue, a celebrity in disguise, etc.

But the sad thing about New York café culture is that it can be really difficult to find one in the first place. Sure, there are dozens of them, but don’t even bother going because you’ll never find a seat. Ever! Only in New York are the coffee shops so fabulous that you can’t even get in, unless you know somebody.

My worst nightmare is getting revved up to go to coffee shop X, arrive, no place to sit. Pissed off, hover around like a vulture; pounce on the first available spot. Hey this is New York—you snooze you lose. If that doesn’t work, I bounce around from place to place trying to find something. Ooh! This café is open, but the Wifi is “down,” which is why nobody is there. There’s one right over here—but they don’t have outlets or Wifi or food or a public bathroom. But it’s still packed. Roll my eyes. Totally over it.
The lack of café space is a problem because New York has such a huge student population—Columbia, NYU, Parsons, F.I.T., The New School, Juilliard, CUNY, Fordham, Hofstra, Yeshiva, Pratt, etc.—but there is next to no place for these students to work! It’s partially because New York real estate is way too expensive.

I mean, coffee shops give us so much—free Wifi and free electricity to power our very expensive MacBook Pros. But greedy customers often only buy a cup of Joe every three hours, a value of, like, $3. Wow.

When I was an undergrad in Ann Arbor, the ultimate college town, there were about 30 million coffee shops to chose from. Espresso Royale! Sweetwaters! Café Ambrosia! Starbucks! The Union! I never had to hover over a table, and I never had a problem finding a place to work. My favorite spot was this North African joint that stayed open till three a.m. called Rendez Vous. I practically lived there. I so had the hots for one of the baristas, a North African dude. He was bananas hot. If eyeing a smoking hot dude isn’t motivation enough to get up and go work, I don’t know what is!

You might think that New York would have more coffee shops than it does, especially since coffee joints, just like art galleries and boutiques, are the very first signs of gentrification. Any newly hip neighborhood, whether in New York, Philadelphia or Baltimore, will talk up their bohemian character by saying, “Hey look, we’ve got these cafes and weird expensive boutiques! So see, white people, it’s safe to live here now!” Coffee shops are one of the things that pour freshly graduated youngsters into dilapidated neighborhoods. Better a café on the corner than a check cashing joint, cause that’s when you know you’re in the ghetto!