Mr. Wrong: The Wages of Death

In which our increasingly frantic columnist wonders why, in these uncertain economic times, companies keep laughing at us in their advertisements. 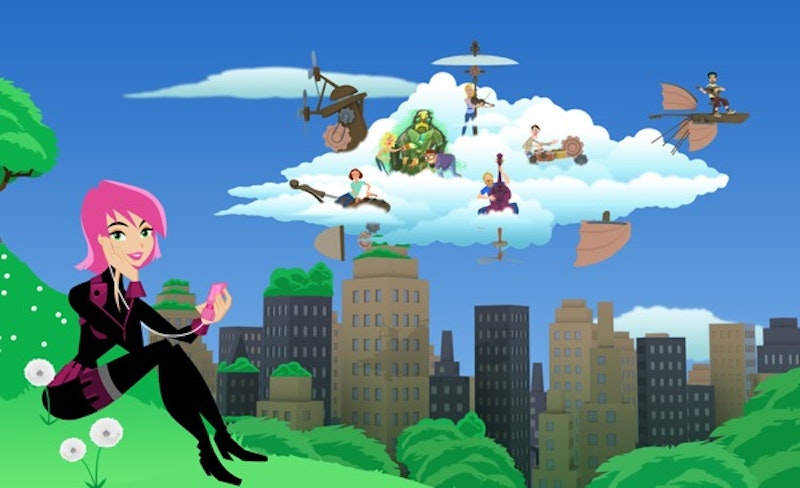 What is with the ad for Esurance or whatever it's called with these cartoon musicians flying around in a blimp or something singing "I got blah-blah in my blah-blah, I got one foot in the grave..."? I mean, I know Insurance is about when you gamble on if you're gonna live versus how much money you need to have so's you can get covered up with dirt or whatever you require plus maybe pay some bills so's you don't stick your family with all that credit card shit you racked up, but I don't wanna be reminded of the dying (i.e. Winning at Life Insurance) part of it so much on the Teevee Commercials you know? I mean damn, things are tough all over, man, seriously, but spare me the Grave remarks, OK? I will never use your Product.

I keep seeing all these collections of people who don't have a job anymore, from all the Industries and shit, and it's like, man, it's only a matter of time before I am in line with them waiting for my scoopful of Soylent Green after the next wave of Economic Corrections happen, you know? It's like, every day I Am Hustling, but shit is drying up all over the place, so the odds are I'm gonna be rowing harder, only without a boat under my ass.

And somehow in my mind the e-surance cartoon guys are related (in my mind) to those tools who pretend to whine about having a bad Credit Report and they then are reduced to singing about making a living working in a Fast Food or Renaissance Faire and shit like that? I totally and irrationally Hate those guys, and I just wanna take all their instruments away from them and bust them over their heads for insulting people who work for a fucking living, even though I totally know that I have suspended my disbelief so hard (and it's not even a movie) and I'm watching some musician-guys (who might not even be actual musician-guys, they just might be actor-guys, but whatever) musically moan about how their credit got broken and they gotta work at a fish fry. Arrghh! I love fried fish, you fucking pretend-identity-thefted jerkoffs! You Advertising People who write this shit, don't insult the great Industry of Fried Fish with your snotty-ass complaining about having to wear a pirate hat, which is totally stolen from the major Motion Picture Fast Times at Ridgemont High, where the guy got bounced from his good gig at the "Best Breakfast You Ever Ate" place and ended up at a place where he hadda deliver Fish Fry in a Pirate outfit, which was pretty funny, no offense to Pirates or people who enjoy to pretend to be Pirates. But, memo to Advertising: Fuck you and your elitist hatred of Work. You are telling The Nation that the only reason someone should work in the Fish Fry is because they have No Options. I will never buy your Product. All you guys do is sit around and think up bullshit to trick people into doing things, and I know because I Get Paid to sit around and type bullshit that is shaped like a column, but I don't even try and get anybody to do anything, except maybe every once in a while Resist the Blue M&M (plain or peanut) or walk on the escalator instead of just standing there.

Anyway, everything sucks, and right now I'm waiting for my President to stop campaigning and start taking it to the Loyal Opposition, seriously, these motherfuckers don't want to shake-a-hand-make-a-friend, man, they want to FAIL your ass out by 2012, so stop campaigning on your good looks and Get Your War On, and I'm not just talking about Rush Limbaugh, man. Why are you wasting time with that? He's got what, four, five hours a day to jaw-jack about Negativity and when you even mention his name it like, increases his Enthusiasms to blabber on even more! It's what he does for a living! Blah blah blah! All week! You are gonna get your battery drained by this guy, no offense, but you cannot defeat the Paid Professional Blowhard in a Talking Contest! Forget his ass and get it on with the Distinguished Gentlemens all up in the Halls of Power, umkay? I didn't elect your ass so you could tell people not to listen to Free Speech coming outta the radio! You gotta get errbody to fixing this goddamn Economy before I lose my cushy gigs writing columns about bullshit!

I mean, I'm still totally optimistic at least about Getting Paid for word-shaped pixels here in the World of Webs, but it's not feeling like a Growth Industry anymore, stealing money in exchange for my thought processes, you know? I mean, I'm as surprised as my most Hateful of Haters that anybody runs their eyes over my column, dig? If I haven't said so lately, I certainly am in complete and utter-ass appreciation, puzzlement, and wonder as to the regular Gentle Readers of the shit I send out to My Fans. I mean, I don't read columns of anything, man, I read, like, magazines, or at least I look at 'em while I watch Teevee, you know? Every once in a while I read a book, but they make me sleepy, you know? So anyway, I'm still optimistic about not being gainfully employed, OK? I'm looking for my Next Big Thing, which I think will be the Restaurant Business, but I don't think it will be a "brick & mortar" affair, if you know what I mean. I'm figuring on some sorta push-cart, over by the Underemployment Offices. Errbody else already does hotdogs and pretzels, so I'm thinking Fried Fish.