In which our pragmatic columnist forgives the AIG thieves and pledges to henceforth do all banking at the liquor store. 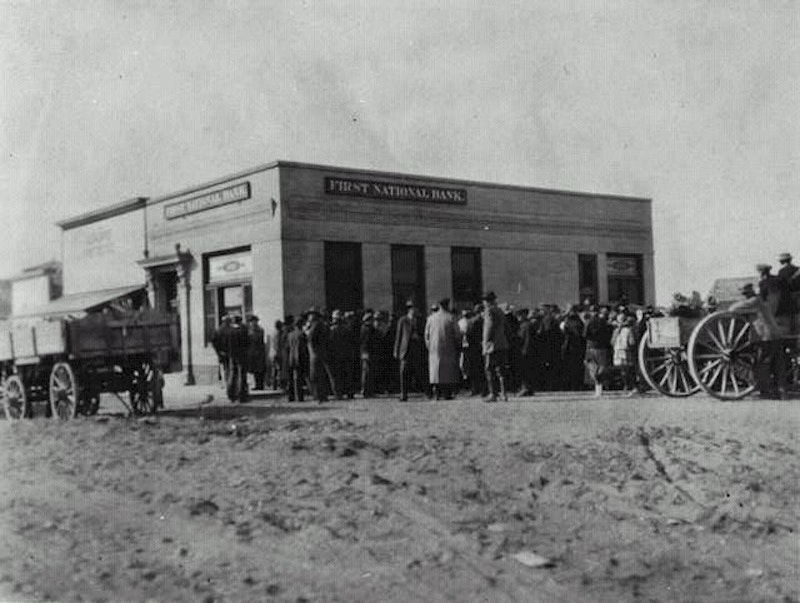 Okay, I’m not exactly a Wizard of Finance or anything like that, but I’m pretty sure this is how Banks work: Instead of keeping all your cash money in a hollowed-out book or that fake soup can the burglars always find or under a loose floorboard or jammed under your mattress or stashed in bags under a whole bunch of cracked-corn birdfeed in a plastic bin in your back yard, you take your money to a Bank, where they have a big-ass vault and the FDIC-type insurance and if you keep your dough in a savings account long enough, the Bank will pay you a coupla teeny-weeny points while they’re busy making their own coin by putting your cash out on the street when you’re not using it.

If you get a checking account and you can keep your money right enough to be able to maintain a nice cushion in there—like basically, you are not somebody who looks at your bank account every once in a while (or more frequently) and sees, like 73 cents, or a minus sign in front of a number—then you get what they call “free checking,” and if you can keep a really nice stack in there all the time, you’ll get some points on your checking account loot, even. If you don’t have enough money to maintain the cushion, you get banged for an “Account Maintenance Fee,” or some bullshit like that where you gotta pay for the privilege of keeping what money you do have in a checking account, all 73 cents of it, pour example, or deeper still, you pay the Bank to be allowed to have a checking account while they are running ads about how much Service they provide to You the Customer. If you have lotsa dough, you get the “free checking,” but it’s still not Free, get it? You’re still paying for it, but you don’t see it, you don’t see what the Bank is doing with your dough, and you’re still getting screwed by the Bank, see?

One time I went to my Bank—which I don’t want to personally identify so I will simply tell you it is a Bank, of America—and while I get the checks for my Day Job electronically Direct Deposited into my account, I am a hustler and I still have other checks from various activities which I gotta take to the Bank, and I used up all those preprinted Deposit Tickets you get with the checkbooks, so at the Bank I asked for some deposit tickets, and the nice lady was all like, “We can send you some imprinted with your information if you would like,” and I’m a dope, so I said “Why certainly, that would be very nice, thank you,” and the Bank charged me like five dollars I think, or maybe it was 12 dollars, jeez, I blanked it outta my memory. Even if it was five bucks it was a rip-off, for some slips of paper to go with my money into their goddamn bank. Now I just go to the ATM and put my checks into the robot check-reader thing. I guess that is an Improvement in Customer Service, not needing the deposit ticket and not dealing with another human? I mean for the Bank, you know? Keep another Customer outta the building? It is Efficient.

If you are a Student you can get some free checking, so the best thing to do is just always be a Student and then the Bank will never get a chance to pick your pocket so much, checking-wise. You could also join a Credit Union, but the problem there is the ATM thing, because you get annihilated by all the other Banks when you go to one of their ATMs, like two, three bucks just to get your money, and it’s not so much the Money as it is the Principle of the thing, man, and the Principle of the thing is the Money, you know? And spare me about like, planning on how much money you need in cash every week, Jesus Christ, I’m not planning every moment of my goddamn life, especially boring-ass shit like getting some cash, just because the Bank is forcing me into a box so I’m self-restricting my own movements because of all the rules the Bank made, man. Freedom isn’t Free, but it is not supposed to have a Service Charge, OK?

I heard the Wal-Mart is kinda acting like a Bank now, but mostly it’s just acting like one of those bloodsucking and Highly Profitable check-cashing operations that stick it to people who, for whatever reason, don’t have a Bank account but need to cash a paycheck like, Right Now, to support one of those horrible Habits (like Groceries or Bus Fare or whatever), so you go to one of these places that nine times outta 10 is right next to a liquor store (where it just so happens I have discovered sometimes the check-cashing fees are not as deep) and you get, like, this little check-cashing establishment “membership card,” and they basically just get all the info anybody would need to verify funds on a check, which anybody with a phone can do, and then you get soaked a percentage of the check, and the more beaucoup the check, the more they make off you, but most of those places will do your money orders free, so there’s a little bit of Service happening, you know?

Anyway, Wal-Mart will cash your check for three bucks, or even less if you’re gonna spend the dough there, which is a deal compared to the check cashing places, and the Wal-Mart also just paid out their own bonuses, like almost a Billion dollars with a ‘B,” so let them be a Bank, since the old-school Banks have been and continue to be fucking us all, but that’s only news now on account of all these Fails, and now all these blowhards in the Halls of Power are blowharding harder and harder about how this AIG thing is Evil and the people who Got Paid bonuses on contracts should be put in jail or set on fire by all us villagers with our torches, but look, if the Government, as in We The People, just went the extra 20 percent and Owned that fucking AIG all-out, then sure, maybe I could understand trying to get those bonuses back from the AIG people, but as somebody who is consistently nickel-and-dime swindled by Banks and Insurance and the World of Finance in general, I would really dig to get a Million Dollars some day for doing something, even if it was just my job, even if my company was making a big skiddy swirly in the Great Toilet that is now Our Economy, so I think people should shut up and let those AIG-heads have their dough, no tax, no new Law thought up overnight, no nothing. They Scored, man. American Dream. They had a contract, and the whole thing is a racket anyway, so the government should either Own this shit or let it melt, OK? None of this 80 percent solution, man, if We are gonna Socialize all these flopperoonie Financial Instruments, it’s gotta be 100 percent, otherwise let’s just let all this shit burn down and Wal-Mart will become a Bank, but I’ll do my banking at the liquor store, because going to Wal-Mart gives me a headache.