Hint: most of them involve drinking. 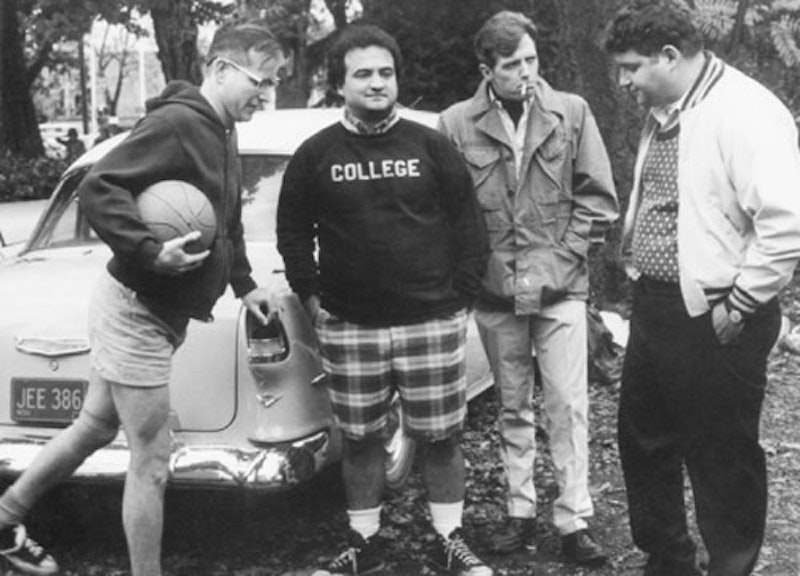 “Let’s do it!” This is probably John Belushi’s most memorable line in Animal House because it sums up his character so perfectly. Throughout the last 30 years, college has become synonymous with this type of mentality. Almost every student across the country, save for a few older adults who go to school from remote locations, is partying hard and missing class at some point throughout college. Belushi, in Animal House, is just that: a modern day caveman who revels in causing havoc. However, what Belushi is actually doing, and, symbolizing, throughout the movie isn’t chaos, per se, but simple rebelliousness. He rebels so extremely because he feels he’s in an extremely boring place: college.

Despite doing it at the fictional Faber College, Belushi invented the modern day “crazy college student” seen on real campuses today. A Bookrags article on the movie states that “It was Belushi's portrayal of Bluto Blutarsky that was one of the movie’s most enduring images, virtually typecasting the manic Saturday Night Live alumnus as a gross, excessive, drinking party animal on-screen and off.”

His reckless on-screen demeanor also has some basis in reality, although most examples aren’t so extreme. There are a number of factors that could cause Belushi’s character to rebel so vehemently against the school as an institution, and all of those have a life lesson associated with them.

One reason could be that he is scared of moving on with his life, evidenced by the fact that he has been in college for seven years and has apparently done nothing with it. This sentiment is common among college students, especially those today worried about graduating into a stagnant economy. It takes courage to step out into the world, ready or not, and that’s something Belushi finally does at the end of the movie.

Another lesson that can be taken from Animal House is simply that people can accept you no matter who you are, especially in college. Belushi, by the end of the movie, is, by most accounts, completely unlikeable, but we like him anyway. Why? Quite simply, he’s endearing. Acting like a loon in college isn’t always recommended, but if you do, people will still find these qualities positive. The only wrong thing to do in college is to do nothing at all.

Perhaps most importantly, the movie shows that it’s okay to just have fun. Roger Ebert on Animal House: “Bluto and his brothers are engaged in a holding action against civilization. They are in favor of beer, women, song, motorcycles, Playboy centerfolds, and making rude noises.” It’s never too late, the movie says, to have a little fun.