How do you value 900 million people separated by a single click? 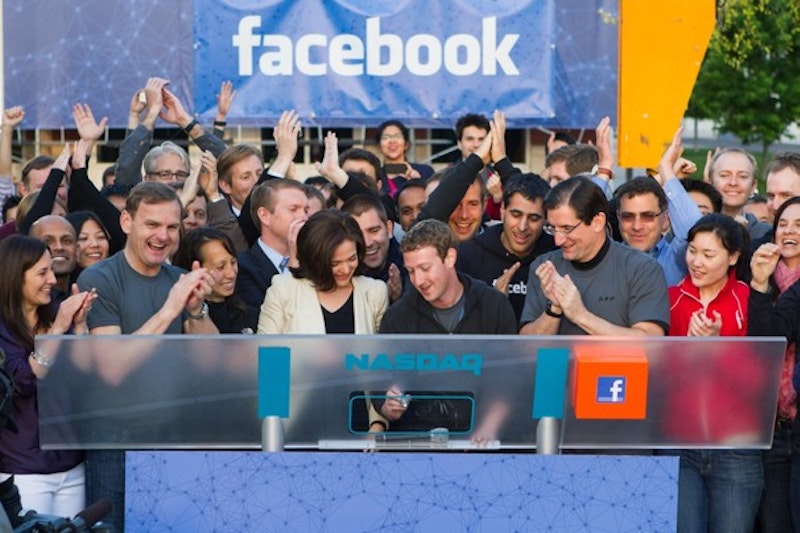 The volatility surrounding Facebook stock remains hot, and nobody can seem to agree on a fair price where the stock price will level out. A number at the core of the debate surrounding Facebook’s stock price, like most other publicly traded companies, is its price to earnings (P/E) ratio, which represents speculation and expectations surrounding the future growth of the company. A higher number demonstrates how much investors are willing to "overpay" for a stock based on how much money the company presently makes. General Motors trades at a P/E ratio of six and Microsoft trades at a P/E ratio of around 10. Facebook has been trading at a P/E ratio of over 100.

With a P/E ratio so high, Facebook demonstrates that there are different meanings of “value” at play between individuals trying to properly assess Facebook, and that perhaps a P/E ratio of 100 shouldn't cause as much alarm as it has to some investors. These varying meanings of “value” are generational differences in opinion surrounding the promise of a company, and this should be acknowledged when trying to assess Facebook. Many among the older business establishment have scoffed at Facebook’s share price, clinging to the idea that if a company hasn’t demonstrated how it can generate earnings, then it cannot justify such a high P/E ratio.

Yet an approach that only considers earnings is very shortsighted, despite the P/E Ratio's place as the conventional and traditional indicator of “value.” Rather, revenue generation in the short-term should be an afterthought when it comes to an idea like Facebook.

The excitement surrounding Facebook should relate more to demographic shifts, changing norms, and visions that email, phone calls, and text messages may be slowly (or quickly) consolidating into one platform that centralizes these needs. Younger generations, as witnesses to just how pertinent a website can be in a person’s life, have a far better pulse on this potential. Baby Boomers understand Facebook’s value in uploading pictures of their grandchildren, but cannot equally process the power of hundreds of 18-year-olds collaborating instantly to plan a prank at school the next day. Or collaborating to overthrow a dictator.

Younger people spend far more time perusing Facebook and better grasp the clout behind mass collaboration. One click on a Facebook “news feed” brings a user to the center of an Israeli-Palestinian quarreling, possibly in entirely different languages. If the world population is merging together on the web, then it’s starting on Facebook. The number of Facebook users today has exceeded 900 million, and shows no signs of stopping as it barrels towards the world population of six billion. The influence and potential of a website that so many people call their virtual home is impossible to quantify through methods that only consider past revenues. The ruffled feathers toward a P/E ratio of 100, therefore, might be outdated.

Considering the power and influence generated from 900 million people separated by a single click, a true measure of Facebook's value should include this staggering number of users. Dividing the total value of Facebook (this week’s stock market tells us it’s about $100 billion) by the total number of users (900 million) indicates that the value of each user is about $110. If anything, this seems significantly undervalued, especially when considering how much advertisement revenue a person will generate over his Facebook life, or if Facebook ever decided to charge users a fee for its services.

While P/E ratios will always have a place in determining the value of a company's stock price, they should be used carefully when the nature and room for growth of a company is unprecedented, as is the case with Facebook. The P/E ratio bears more relevance to a brick-and-mortar approach to evaluating a company based on revenues, and more closely captures the understanding of a generation built around brick-and-mortar businesses.