Jelly Donut Coffee Shouldn't Work, Yet Somehow It Does 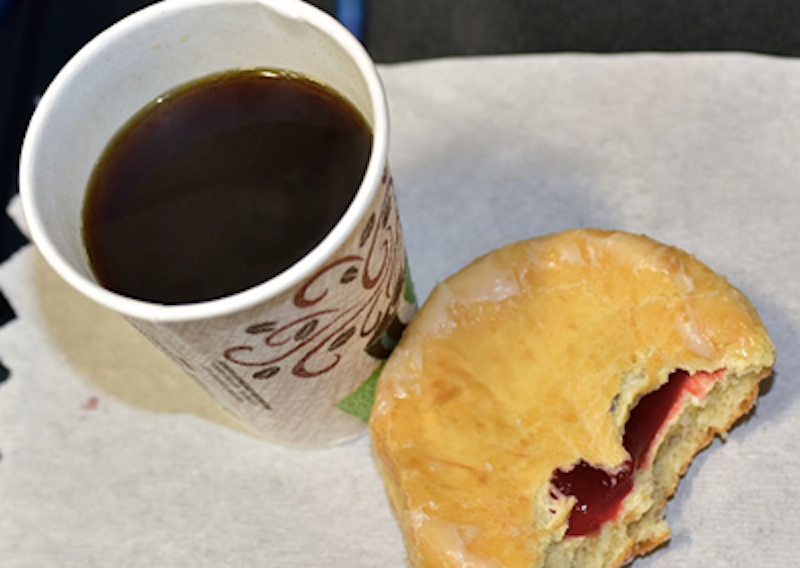 The grossness of jelly donuts cannot be overstated. A lack of preparedness played a part in turning me off, namely reaching into a box of Dunkin Donuts at an early age, seizing what I assumed was a glazed, then sinking my teeth into it and being rewarded with a mouthful of purple goo. I do not like jelly or fruit preservative in anything, donuts or yogurt or pastries or whatever, because to me it reeks of deception; this is the same reason, honestly, that cakes or cookies involving nuts, chips, rains, or other additives stay off my menu. Very simply put, I need desserts—and to a lesser extent, entrees—to be what they purport to be, without ambiguity. To that end, I heartily endorse what I'm calling "the tiramisu model," where there's a very palpable cross-section of textures that your taste buds can confirm.

But my bias against concealed, intense flavor is diverting me away from the central point of this article, which is the incomprehensible goodness of Dunkin Donuts' new Jelly Donut coffee flavor. In theory, it's a bad idea, regardless of whether or not one enjoys the company of jelly donuts: if you dig on jelly donuts, there's the possibility of the result falling flat; if you detest jelly donuts, there's the possibility of the result being slightly too true-to-life. It's a pleasure to report that this coffee falls about in the middle between these two extremes; when you take a sip, the warmth and depth of the brew take center stage, with the rollercoaster-embodiment of confectionery jelly flashbulb popping hard immediately behind.

Then a really funny thing happens, and it's a relief: that herky-jerky wallop of flavor just fades, mercifully subsiding as swiftly as it came on, until the next, fateful sip. The effect is like being viciously drunk for three minutes then, just immediately, totally not drunk, or masturbating vigorously with no guilt immediately following. There's no icky aftertaste, and no need for a napkin to wipe away the goo; no one will think you just ate a small mammal or got punched in the mouth. All I know is that somebody on the Dunkin Donuts payroll had better get a Sasquatch-sized Christmas bonus.