It's Time For Mark Zuckerberg To Buy the Yankees

The business of America is business. 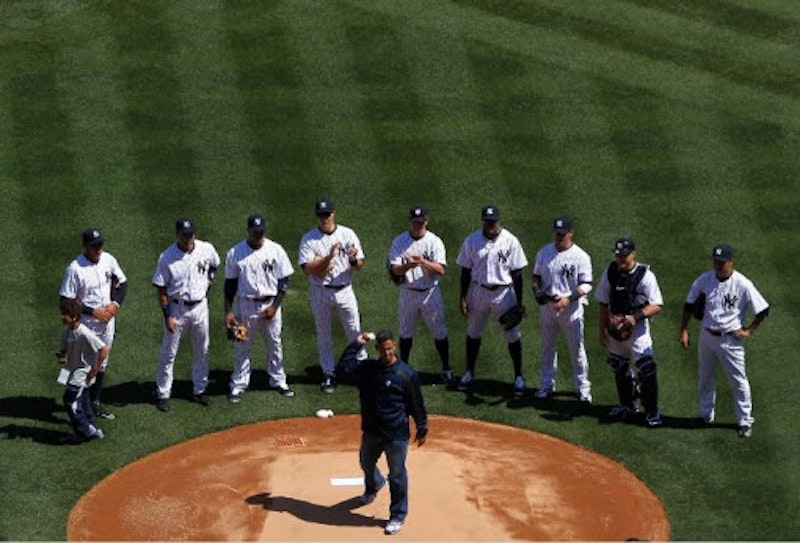 The New York Yankees, the most hated and beloved sports franchise in American history, are in the news again. Now, the team is always Topic A in the city, but right now, as Joe Girardi’s roster of well-paid stars faces elimination for the American League pennant in Detroit—they’re down three games to none just after 1 p.m. today, but as a Red Sox fan I won’t rest until they’re officially snuffed—the hub-bub has spiked to an extraordinarily pleasing level. Alex Rodriguez, maybe the most detestable and self-aggrandizing athletes alive, has sat on the bench and GM Brian Cashman—the worry lines on his face make him look 68 rather than 45—is batting down rumors that the slipping sliding away third baseman will be dealt to some sucker of a team in the off-season. Robinson Cano and Nick Swisher can’t hit in this post-season, and St. Derek Jeter—a justifiable Hall of Famer whose fielding ability (or lack thereof) still draws huzzahs from the mostly idiotic sports broadcasters on Fox and TBS (Ron Darling excluded)—busted his ankle and is prepping for surgery.

If the Tigers can kick and kill this dog while it’s down I’ll be able to relax and watch the World Series leisurely.

Jonathan Mahler, author of the excellent Ladies and Gentlemen, The Bronx is Burning, wrote about the current Yanks contretempt on Oct. 17, “The Decline and Fall of the Yankees Empire,” and while documenting the team’s current post-season power outage, concentrated mainly on the business itself and the hubris of owners Yankee Global Enterprises LLC (controlled by the Steinbrenner family) for the new stadium it built, with an inexplicable lift from taxpayers, and opened in 2009. Riffing on the much-discussed empty seats at the Stadium during the first two games of the Detroit series last weekend, Mahler, who at one time shared in a season-ticket plan, detailed just how expensive it is to attend a game in the Bronx. He likened the new limestone edifice to Versailles and Enron’s “postmodern skyscraper in Houston,” suggesting that a consumer mutiny may be in the offing. As a former New Yorker, I’ve attended a lot of games at the pre-renovated “old” Yankee Stadium in the 1960s; purchased a season ticket package for several years in the 90s, which cost about $11,000 for 81 four-ticket games—mostly a business expense that was recouped by May each year—and have taken my sons to the new park a couple of times.

As I wrote two years ago, the Steinbrenner monument reminded me of a Third Reich edifice, the limestone gleaming, the ceilings impossibly high with flags of Yankee stars in place of swastikas, and an unceasing noise level inside, sometimes provided by fans, but more often the blare of music and rotating advertising. To say Yankee Stadium is garish would be an understatement of gross proportions.

Mahler speculates: “The math is simple: The Yankees can buy all of the players they want, but they can’t make them hit. If they don’t hit, the team will lose, and Yankees fans—having emptied their wallets to see a winning team—will lash out, or simply stop buying tickets and merchandise altogether.”

Naturally, I hope that comes to pass. (I’d be remiss in not pointing out that the Red Sox, under the stewardship of primary owner John Henry, gouge Boston’s fans—highest prices in baseball—and demonstrated equal disregard for their consumer base by perpetuating a mythical “sellout streak.”) I don’t think it will, but there are worse ways to pass time than daydreaming.

Global Enterprises, as Mahler notes, is worth approximately $1.7 billion, but after the Dodgers fetched the mind-boggling sum of $2.1 billion earlier this year, I think that Yankees figure is understated. I’ve bandied about the following idea before, and now, with perhaps some institutional distress reaching new levels, here it is again. Mark Zuckerberg, still trying to recover from his botched Facebook IPO, ought to make a preemptive bid on Global Enterprises, just as Rupert Murdoch did with Dow Jones & Co. several years ago, and publicly offer $3.5 billion for the team. Zuckerberg has access to that huge sum, and as the Facebook management team is having difficulty translating its billion users into steady revenue, darkening its future prospects, he could use a “legacy” business to provide, in today’s lingo, a platform from which he can reap huge profits.

The Yankees are not for sale, at least that I know of, but if Zuckerberg made such a bid, the minority shareholders in Global might very well want to cash out at such a premium, and if the Steinbrenner family balks, it could face endless litigation.

Two legendary companies, one nearly a century old, the other still not at the decade mark, swinging for the fences. At one time in American business, that would be called “synergy.”