Day trading is back? Arianna Huffington and Drudge are the media names to beat? The Yankees are good? What year is this? 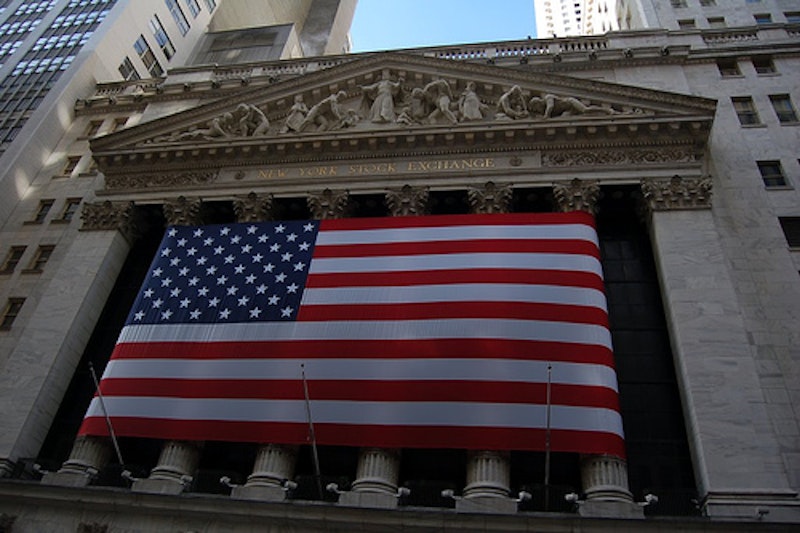 Ten years ago, as the world prepared festivities for the turn of the century, it was almost impossible to go through a day without hearing Prince's early-80s rocker "1999," a grating example of how a thrilling song can be rendered meaningless. I'm not certain if 90s nostalgia is now fashionable—you read or hear about such trends about as often as studies are released that adolescents are, or aren't, consuming more controlled substances—but upon reading a front-page story in The Wall Street Journal last week I got a powerful blast back in time.

Day traders, both pros and some amateurs, according to the article, are getting their claws back in the market, and if this is a tentative sign that one sector of the economy is recovering—I suspect television will soon again be awash in Charles Schwab and E*Trade commercials—it brings to mind how the world a decade ago, specifically in Manhattan, where I lived at the time, was going nuts all at once. Newsstands were packed with tech magazines such as The Industry Standard, so (temporarily) fat with advertisements that the biggest problem for its editors was finding enough quality content to preserve a semblance of integrity. (That's a touch harsh, as The Industry Standard was a decent publication; my point is only that the proprietors had the unique conundrum of a title growing so fast that the dynamics between the advertising and editorial departments were completely flipped around.)

The proliferation of huge box stores like Barnes & Noble brought a weird, new element to daily life: even as the independent bookstores were slowly dying, the idea that you could spend an hour at a Barnes & Noble and not buy a thing, but still browse at will, sitting in easy chairs with a coffee from the adjoining Starbucks was strange but not unsatisfying. The business pages of the dailies were filled with stories about takeovers, hostile and friendly, mergers, endless takes on the "synergy" companies were attempting to master and profile after profile of men like Bill Gates and Jeff Bezos. My next-door neighbor back then was Richard Parsons, who was given the thankless (but lucrative) task of untangling the messy and rash merger of AOL and TimeWarner, and on occasion he'd bend my ear, seeking an outside opinion, before hustling off to the idling limo waiting for him on Duane St. at six a.m.

The Internet, for most people, was still in its infancy and Matt Drudge—who, unlike so many fledgling web entrepreneurs, was shrewd enough to have a skeletal staff—was the go-to portal for almost every journalist I knew, whether they admitted it or not. In the past year, there's been a skein of stories about The Drudge Report's alleged irrelevancy, with the theory that Arianna Huffington has surpassed her onetime buddy (back when Huffington was a conservative), and maybe that's true. If so, Drudge has made so much money in the past decade that if it's his desire to slow down and disappear into a mysterious vacuum, hats off to him for being a true media pioneer. Remember, this is the guy who was once dismissed as a mere gossip by the haughty op-ed columnists who had zero idea of what their own fate, and that of their employers, would await 10 years down the road.

I'm drifting here, sort of like when you spend time in the attic or basement attempting to chuck excess junk. So: day trading. In the late summer of '99, the accountant at the newspaper I owned then, New York Press, buttonholed me one day and expressed his frustration that the paper's leading salesman hadn't cashed any of his checks for more than three months. This was odd, since the fellow, a hard-working guy who could convince nearly any retailer into buying space in the paper, had until that point, been the first to the bank on payday.

He was a good friend, as well as valued employee, and so one night, sitting in our season tickets at Yankee Stadium, I asked him what was up, since the static from accounting—held paychecks seriously messed up the books—wasn't a problem I needed. He was sheepish about it, but finally admitted that he was making so much money day trading—on lunch hour, of course!—that he just didn't have the time or inclination to get to the bank. I was impressed, sort of, when he told me he'd made a profit of $100,000 in July alone of '99, which was half his annual salary. I'm no expert on the vicissitudes of the market, but knew enough to warn him that smart people who dabbled in a field that wasn't their chosen profession were courting all sorts of trouble.

He sloughed me off, convinced that his Vegas ride was going smooth, but did promise to cash his checks. Fast-forward to April of 2000, when NASDAQ crashed, and my buddy was wiped out, and suddenly competing more ferociously for advertising accounts. This wasn't all that smooth, though, since when that bubble burst, the easy advertising dried up and he had to develop a new client base.

This is a mere snapshot of an era that seems distant-more like a generation ago rather than just a decade-but if day traders do step up their activity, it's only a matter of time, say 18 months, before the get-rich-quick crowd rushes back into the housing market. And then, I hope, there will be a return of those really funny television commercials with that dumpy guy who muttered, "Drat, lost another loan to Ditech!"