How the Kindle Fell Apart Completely 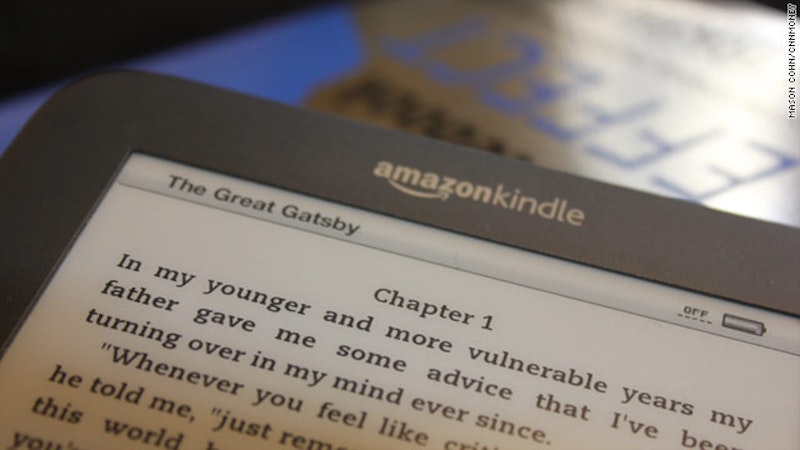 As he was ringing up my new Kindle Touch, the blue shirt at the Best Buy checkout asked if I wanted the warranty. "No!" I told him, with some force. The one thing the warranty on my first Amazon e-reader didn't cover was misplaced items. So, of course, I had lost it.

Having spent a whole day turning things over, re-tracing my steps, swearing like a sailor with Tourette's who'd just smashed his thumb with a hammer, I wasn't about to throw even more money at the new one. He nodded as I said this. The replacement came home with me sans warranty. Right now, I wish I'd got it, just so I could smash the thing to bits with no repercussions. The downside is, I'd still be stuck with a Kindle Touch.

Don't get the wrong idea: I'm not one of those knee-jerk down-with-the-latest-technology types. I liked my old Kindle fine, both in concept and execution. It worked well and the design suited me. It had its own keyboard, so none of the uncertainty, fragility and messiness of screen touch technology. When it idled for too long, the screen savers that came on were works of art you actually wanted to look at. The battery lasted a long time. And it was on track to paying for itself in money saved on London’s Spectator and The Financial Times’ weekend editions alone—at least $25 a month lower than the newsstand prices, with no clutter.

Kindle was a limited but great product. It was perfect for downloading, organizing and notating books, and not much else. When I tried to use it to check Facebook, it would freeze up more often than not. That was okay by me, because I hadn't bought it to surf the Internet. I could make do just fine with my desktop, laptop, cell phone and smart toaster. But then the iPad happened, along with a host of other e-readers, and things only got worse.

Amazon freaked out and lost faith in its own product. It tried to lower the price by offering a version that substituted paid advertisements for art. Initially, people could pick the version they preferred, but the bad drove out the good. Now the ads come standard and pop up with annoying frequency. You can be in the middle of reading a book on your Kindle Touch, with no delays, and—bam!—there's a full page ad for "80% Off Teeth-Whitening" at the Smile Bright Store that you've got to stop and deal with.

The noble keyboard also lost out. None of the standard versions you can buy, either through retailers such as Best Buy or through Amazon, has one. On the Kindle Touch, it's been replaced by a drop-down on-screen keyboard that makes typos more likely, and by a clunky, less intuitive interface. The more you type, the more oil from your hands grime up the screen, making it that much harder to read. This latest iteration is kindling something, all right, but it sure ain't a love of learning.
—Jeremy Lott, editor of Real Clear Books and Real Clear Religion, is writing a book about death.