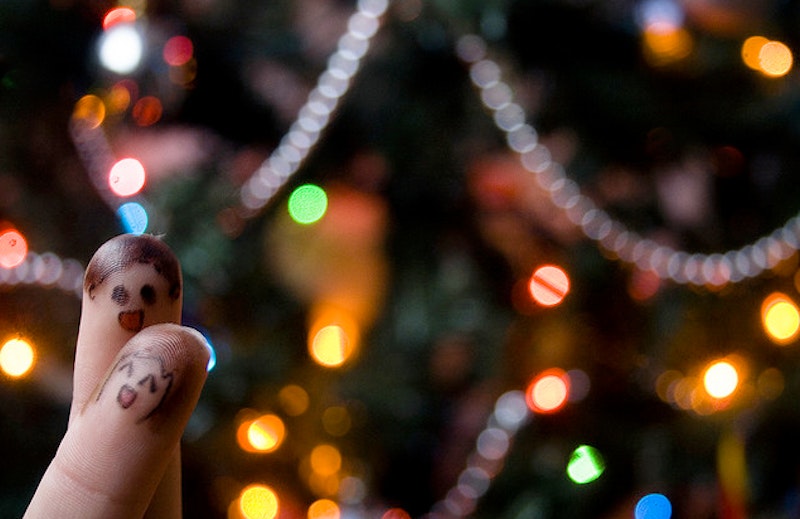 “We’re not doing this again,” is something that we hear annually at Christmastime, and with each subsequent year, the phrase is spoken with slightly more contempt and impatience. My grandmother is generally overwhelmed by anything more complex than a sandwich, and even that second piece of bread is usually met with beleaguered complaints. In about 15 years, if my grandmother manages to outwit the devil for that long, we expect this declaration to finally find purchase and be screamed loud enough to disturb the denizens of the surrounding states and rattle them into a state of depression. Legend has it that if you stand outside on December 23 and remain perfectly silent, you can hear Grandmother’s lament as far away as Poughkeepsie, echoing through the mountains of the Hudson Valley like a ghost train.

I never understood why Christmas always presented such a conundrum. You make a shopping list with all of the requisite foods (ham, turkey, and bread and mayo to make both of those things remotely palatable), pick up a few neat presents that remind you of people you like, and you’re done. If you make it more complicated than that, you’re doing it wrong, and you should stick to simpler holidays like Arbor Day and the various solstices and equinoxes.

When one family member considers Christmas a burden, it spreads like a virus through the close quarters of the residence, as if someone with a tenacious cough licked a fork and put it back in the silverware drawer just for the hell of it. Because we’re all family here.

My grandparents had six children.

One aspect of the family seeks to expedite this whole Christmas process by ordering things for their children and simply billing my grandparents for the presents, which is either incredibly callous or admirably efficient. I’d have investigated further, but they didn’t show up on Christmas day to share in the family’s tenuous, slippery grasp on tranquility, punctuated by the dog snatching new scarves and children shrieking at the slightest provocation. You can’t blame the derelict chunks of the family for maintaining a safe distance, but in all fairness, enduring the frustrated madness of family is the price that you must inexorably pay if you want to get a present. Nothing comes for free.

Another wing of the family declined to come and visit at the last minute due to the slow and tragic advancement of Parkinson’s. Others didn’t show up because working double-overtime at the waste water plant seemed more worthwhile than visiting aging parents. Or perhaps it was shame that kept him away, having “accidentally” texted a picture of his junk to another family member earlier this year. We don’t want to know.

As Christmas itself ages, and myself along with it, I’m more inclined to leave it behind and let the generosity seep out of me throughout the year, rather than in one gross ejaculation of altruism. The family’s only tradition, aside from the typical ones, is engaging in ineffectual arguments about some inconsequential thing, retreating to opposite corners, and returning to the kitchen as if nothing ever happened. Christ left Christmas long, long ago, and like that wise aunt who moved across the country, he’s never looked back. They’re both hesitantly invited into the fray, and they occasionally make a brief appearance, but they’re smart enough to have a viable escape plan. It’s all tradition.

No, I take that back: my niece is very accurately carrying on the tradition of vociferously complaining about each Christmas being the “worst Christmas ever,” in the imitable style of her mother when she was my niece’s age. Replace “Barbie Dreamhouse” with “iPod Touch” and it’s the same thing.

I subjected my girlfriend to Christmas this year, which is roughly 2.7 times more intensely uncomfortable and argumentative than Family Vacation, but with better hiding spots and worse food. It’s very easy to love a girlfriend who brings Green Lantern Converse shoes and a 19” talking Galactus action figure, so I visited her place on Christmas Eve and shared a lunch with her mother and brother which entailed me nearly knocking a glass of root beer into the potato salad and a conversation about rape and an axe murderer I know. I think we’re even.

My family can stop creating their own monstrous view of Christmas and I wouldn’t miss it. It’s never about what’s built around you, it’s about what you choose to create, or actively decide to avoid or leave out. I do know that I can leave the Christ out of Christmas. There’s already enough guilt and obligation around without him judging me too.