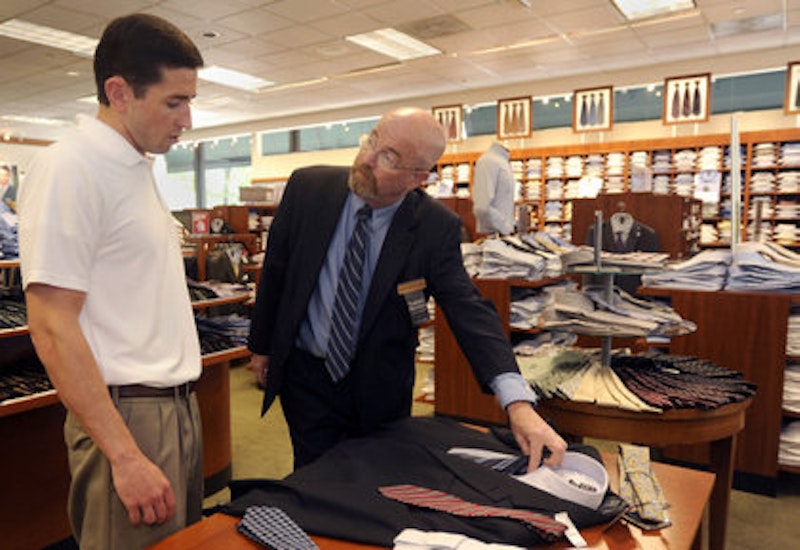 Salesman knew very little about suit construction. I asked him if any of the suits in the store featured a floating canvas and he just sort of grunted at me, then raised his head in the air and extended his upper lip. I ended up doing the “pinch test” (look on Bing if you are interested) and I think most of the suits in the store were fused. Mostly [overseas] construction as well, which was disappointing—I would be willing to pay a premium for American suiting! Salesman was also unable to help me with my purchase—I picked out a half dozen golf polos and brought them to the counter, but I must have done something to startle him because the salesman knocked the polos and the cash register to the floor with his face and then kicked over a rack of leather blazers. The salesman’s hair was very thick and glossy and his nose was extremely velvety, but I think he needs more training and should not be allowed to man the counter by himself.

Store was a Burroughs-esque nightmare filled with ejaculating fishboys who begged me to hang them from a perverted sex gibbet. The manager, who was some kind of pimp/spy whose mind was being devoured by a sinister cassette tape, would not apply my 20 percent off coupon to a pair of Allen-Edmonds Norwegian-toe bluchers that had been partially dissolved by an alien sex skin (he did, unhelpfully, tell me that they had been “eaten up real slow and nasty”—yeah, thanks doofus, I already know that, this is not my first time at the fine menswear rodeo). Very convenient parking. I purchased several pair of discounted shoe trees.

Sales staff did not laugh at my reference to Flaubert’s Dictionary of Received Ideas.

I visited Jos. A Banks because, embarrassingly enough, my ex-wife had thrown out my sacred suit of feather armor, which an ancestor received from Huitzilpochtli. Staff were helpful and polite, took my measurements, and I left the store with a great-fitting suit of sacred feather armor and a few golf polos—best of all, they were having a buy one get two or get 60 percent off one item sale, so I saved a lot of money. Thanks, Jos. A Banks!

The man he put his hand upon my bosom. Now I am lonely and think bad thoughts during the night. You have made a powerful enemy, Joseph Aybank!

I com riding to Jos. A Bankes and heard within the greatest dolore that ever man made. I found three jantilwomen and three maidens weeping by the sweateres. Three knyghtes shieldis hong upon the wall—one red, one grene, and one blue. Within the chaunging room were the three knyghtes whose shieldis hong without, who wept also and made great dolor such that I thought their hertes would to-braste. “A” I asked, “what has befallen ye, an ye make such great dolor?”

“A, sir knyght,” the red knyghte said, “a false knyght has deceived us and brought us to shame, who were alway befo men of worshyp. The managere, Gawayne enticed us with swete wordes, and treated us to sporte, and to play upon tambours, and to essaye golfe polos, but he did us false servys. Sengly he lede us into the dressing rooms, and with a nymell hond he pluckede up our swerdis and hurlde them into a foul privye, and trickede us into looking into a depe hool; and then befell us a dolorous fingerblastynge, and we have been prisoners of the miscreaunte knyght ever sens.” I took my strong glaiv and dressed myself against the fals knight but I could not essay him because it was his daye of and he was with his mother, Morgan le Faye, at their condo. This managerye, Gawayen, who is Arthur’s nivew and shold know better, is a man of prouesse and passing good man of his hondis, yet I thinke he is the falsest and moste uncourtlie knyght aliv.

Sales staff did not laugh at my reference to P. G. Wodehouse’s celebrated “Jeeves and Wooster” series of short stories and novels.

Manager is a plukey-faced wee hing out whae’s asking to be glassed in the heid and nae mistake. Still n aw the gowf polos urnae so bad.

I bought a dozen pairs of unattractive work pants for my grandson at Jos. A Banks. He is a good boy, but stupid, and he deserves no better. The young man who helped us did not show even the slightest interest in my local Civil War history spec teleplay. He is lucky that he escaped a thrashing (I carry a carbon fiber cane that can be used for self-defense. The state revoked my concealed carry permit because of a severely misinterpreted incident in which I fired a few rounds into the air to frighten off what I thought was a youth gang, but which turned out to be an ill-supervised science day camp). Worst of all, he secreted figs in each pair of pants, and when my wife washed them it got a figgy smell into our washing machine, and now when I go out in the yard animals and insects cling to my figgy smelling trousers and shirts. I was not charged for the figs. My wife informs me that she may have knocked the figs into the washing machine herself, because the washing machine is in my fig room.

Parents murdered by shadowy figure calling himself “Jos. A Banks.” Figure scared away family dog who I did not like, so two stars.

Sales staff did not laugh at my reference to Kyril Bonfiglioli’s Mortdecai Trilogy (I am a portly gentleman, like Mortdecai). No XXXXL golf polos.

Salesman spoke only in rhyming couplets and kept emerging from clothing racks and piles of sweaters, tittering and scattering a beautiful iridescent dust.

Salesman unable to execute a simple dressage test (first level, test two, screwed up free walk of all things, if you are interested). Also, he rubbed his tail in the trailer and now requires a costly prosthesis to cover up the bald spot.

The sales staff harassed me—yes, harassed me!—because I took a few hours more than usual, only four or five hours, to select a sports coat. When I attempt to choose a sports coat I hold out for something absolutely perfect—why, I have even been known to pout, or to ball my fists in my pockets and throw a tantrum, yes, a real tantrum, like a child! Though inside all the time I am laughing.

But when I come up against an ill-fitting jacket I don’t just renounce everything and move on, or buy it anyway; what does its ill fit really mean to me, or the poor skill of the tailor? Why should I be bothered by a thing like tight shoulders or a baggy waist? Simple, natural people, the spontaneous men, the men of action, they trot into the store and buy a jacket and trot right back out, bellowing lustily. If they can’t find something that fits, why, they just tell themselves “too bad, I’ll look elsewhere!” and then they leave!

For me this would be a sickening insult, something that I would savor, lying in my bed, turning it over and over and biting my lip with rage! I don’t know why I would do it, but I know that I would. Those of you who have read my review of Boston Market (oh, I hope you read it carefully!) know what I’m talking about.

But I am gabbling on here, I was talking about Jos. A Banks, not the Boston Market, or my private hours. The sales staff began suggesting that I might want to leave after the third hour—that I might want to leave! As if I, myself, might spontaneously decide on this idea—or perhaps fix on it as a natural course, an obvious program of self-interest (as if I, or anyone else, had the faintest idea what self-interest might even mean!)!

I’ll tell you, I was laughing as if I had just been slapped. Of course I knew all along that I wouldn’t really buy a jacket—buying a jacket would mean committing to a certain look, presenting myself as a certain kind of man, as if I had firmly decided upon one course of being for the rest of my life – how happy would I be if that were the case! I left the store with a golf polo—I was smirking, all the while hating myself internally, feeling like a scolded child (in fact, like I did as a child when I deliberately provoked Father), I don’t have the slightest interest in golf, and a man of my carriage looks ridiculous—ridiculous!—in a polo shirt! I’ll tell you what I did with it – I threw it in the trash. No, that was a lie, I kept it, but I wish I had discarded it.