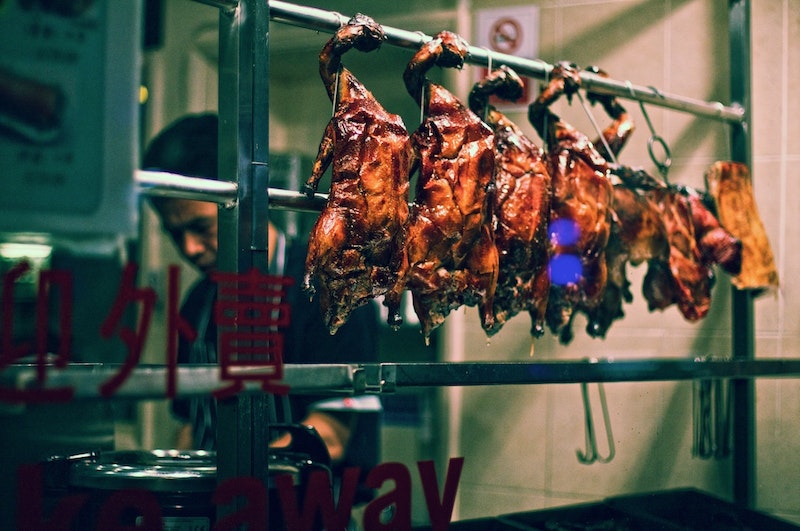 I was always somewhat embarrassed by the duck scene in A Christmas Story, in which the Parker family is giddily horrified by their duck getting swiftly decapitated at Chop Suey Palace, where they went after their Christmas Turkey had been ravaged by dogs. It's a sweet scene, albeit with a touch of patronizing racism, especially the stereotypically accented rendition of “Deck the Halls,” though a joke is, at heart, just a joke, so no offense is taken; but as a grimly self-conscious Chinese adolescent in a predominantly white suburb, I was horrified not by the decapitation, but by our laughable portrayal.

The lone bird's stark contrast on the cutting board could be metaphorical: its bleak fate, left unadorned by garnishes, head chopped off for a gag, was in large part deviant, a cultural mistake endured by the Parkers on a sacred night.

There's a Chinatown nearly everywhere, and we've all seen roasted ducks in restaurant windows, their necks twisted around the metal hooks by which they hang, the chow mein or fried rice below, strategically catching all the fat drippings. My more refined white friends—whose pensive dietary preferences, as guided by food ethics, are endearing—ask me if this is supposed to look enticing. I say "yes."

I've been asked if I have ever eaten dog, to which I defensively say "no." In the comment section, people argue the difference between a dog, a pig, a cow, etc., parsing out the sentience of each animal, as if it took a high IQ to know your throat was being cut. I still laugh at the Louis CK joke about encountering a huge barrel of duck vaginas in Chinatown, the epitome, as he hilariously points out, of dominating a species. "What if I love duck vaginas?" he worries about getting addicted, and diligently abstains.

When I went to college, my mom stopped cooking. She hugged me a little longer than usual, outside the packed car, and solemnly said her job was done, a sneaky twinkle of victory in her eyes. Christmas dinners since eventually led us to the local Chinese restaurant, whose doors notoriously remained open in a vast wilderness of darkened restaurants: a diaspora of Asians, some Jews, and a handful of dour single men, unspeaking old couples, and the occasional frazzled American family whose neighborhood dogs, as I liked to imagine, might have also ravaged their dinner.

Our favorite is Tea Smoked Duck, a cooking process evident in its name, slowly smoked over tea leaves and twigs into dark crunchy pieces. For less than the price of an appetizer at a mid-range bougie restaurant, you get half a duck. The economics of Chinese food means you're always in some kind of palace: a king, an emperor, or just a son.

The first Buddhist precept is to abstain from killing, but of course this is murky territory. Only the most loyal (and literal) monk would guide an unwanted fly out of their hut. What ends up on our plates—or essentially its absence—is but the mere aesthetics of death, an apology to the animal, a denial of its sacrifice. The head, in Western culture, is almost never displayed because that is where the eyes are; the eyeballs long burnt out still stare, as some far off moral indictment, from empty sockets.

My father, whose super-strong denture glue turns him into a commercial for one, goes for the duck's head with a kind of manic concentration that seems almost pornographic. My mother claims the neck to hold the most flavor, and loses herself in that. The joke about chopsticks being both too delicate and ponderous to use is indeed a joke. We use our hands. With a lingering tinge of shame for "my people," I wonder how others perceive this situation: Chinese people eating weird parts of a hacked carcass on a night reserved for the saved. Our lips glisten with fat. We never pray.

Dad finishes sucking the skull, going over the cranium with a chalky scrape. White people fork their fried rice and totally falsified Kung Pao Chicken, curious about what all the havoc is, convinced our table tastes better. Mom spits out a vertebrae and neatly places some skin on the edge of my plate—what used to be love, before the invention of cholesterol. I wash some Tsingtao down my throat, which is so pale it's like water into wine.

Ralphie thinks of their duck as "Chinese turkey," which is the beauty of childhood: to define the unknown by only what is known. This may also be the beauty of adulthood. So I—self-appointed ambassador of Western etiquette—a little embarrassed by the scene, by our people, from a place so deep no therapist has a chance, grab the more conventional thigh, and gently gnaw on it.