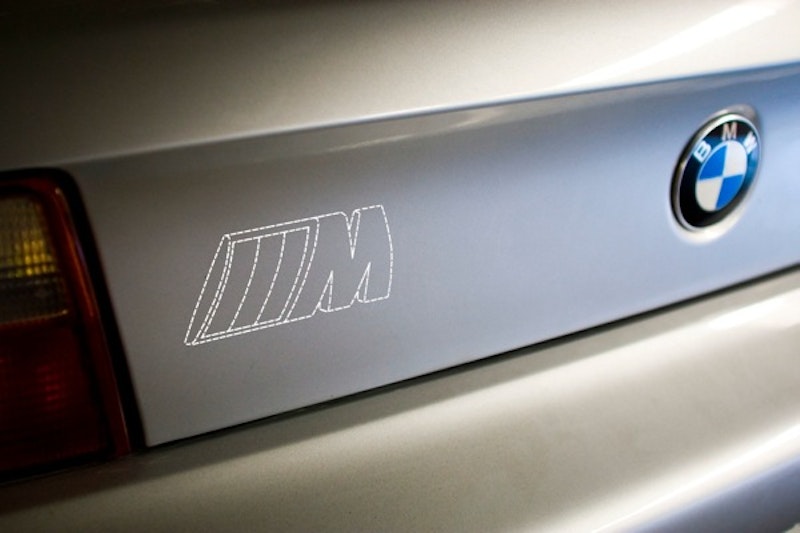 This was when I knew I had to de-badge my 1997 BMW Z3: Driving down the 880 outside of San Francisco, a man in a Ford Windstar minivan waved frantically at me to lower my side window. He pointed first to my car's tail, then to its hood, and finally to its driver, waving his finger, scolding me.

For the four months I'd owned the BMW, since I found it for around $5000 on Craigslist, I'd been driving around a lie. It could have been the slick stereo dealer who sold me the car, or one of the three probable liars who owned it before him-somebody saw fit to affix a fake "M" badge to the very non-"M" 4-cylinder Z3. And now that it was my Z3, the fakery was mine, too.

The differences between my humble Craigslist roadster and that tuned, sculpted beast that rightly wears the "M" badge don't just lie in the engine bay, nor in the brakes or the suspension, in the extra-wide rear tires or the four exhausts. The proud red-blue-purple colors of the real badge had faded, a sign that all was not right with my car. But the easiest way to spot a true "M" roadster is to look for the beautiful, chromed vent running on either side of the hood, a work of engineering art that my car, of course, didn't have.

As I uselessly walked circles around my car on the pull-off lane of the 880, I felt certain it was this vent that the minivan man was pointing towards. My forgery turned a sane driver into the captain of a righteous missile, built to eradicate the unworthy.

And it wasn't as if I didn't deserve it—I felt justifiably eradicated every time a real M3 would spot my fake badge, pull around to check the side flank, and then disappear in a huff of very real four-barrel exhaust. If only they could see me in my entry-level cockpit, self-flagellating. "It wasn't me," I would say as the purest of the BMW breed sped away, "it was the last guy." Worse were the actual M Roadsters, which would pass slowly enough for the M owners inside to sneer.

The previous owner, the counterfeiter, must have gotten the same treatment. He was a strange sort the more I thought about him. The fake badge seemed to target the rare person who knew enough about cars to appreciate and respect an "M," but not enough to actually tell the difference upon seeing a forgery. The badge couldn't impress the opposite sex; there are few pick-up lines more destined to fail than those constructed around what type of BMW you drive ("No, I do drive a BMW, it's better than the others because it has this special badge..."). Why would anyone want to invite that kind of guilt and rejection?

Now, don't get me wrong—I have limitless respect for the German scientists who put together the M Division. Many of them have worked their entire lives for such an honor, to make the "Ultimate Driving Machine" somehow even more ultimate. I would love to own any car in the M series someday. Preferably a real one.

My badge-modifying predecessor must have felt the same way. Kidding aside, I can't say I really resent the guy. Every one of us wants to find that great deal, the buy-one-get-one-free nacho and margarita combo, the M Roadster for the price of a Z3. Most of us can silence our consciences long enough to wear a fake wristwatch out to the neighborhood bar. Over the past few years, Hyundai have calculated their styling to be more than just reminiscent of fancier cars with more respectable badges. Apparently, it's not just civilians who want to appear sophisticated; it's corporations as well.

I too wanted to seem sophisticated. I was tired of all of the wary glances from other drivers, tired of wondering if they knew or cared about my fake badge. So I decided to take it off, with a couple of feet worth of dental floss and some rubbing compound. I wrapped the floss around my fingers and started slowly sawing away at the "M." It left behind some stubborn black foam after it fell off, but soon enough the rubbing compound took that off as well, leaving my car the way it was found, and leaving its driver legitimate, finally.