All Will Be Saved 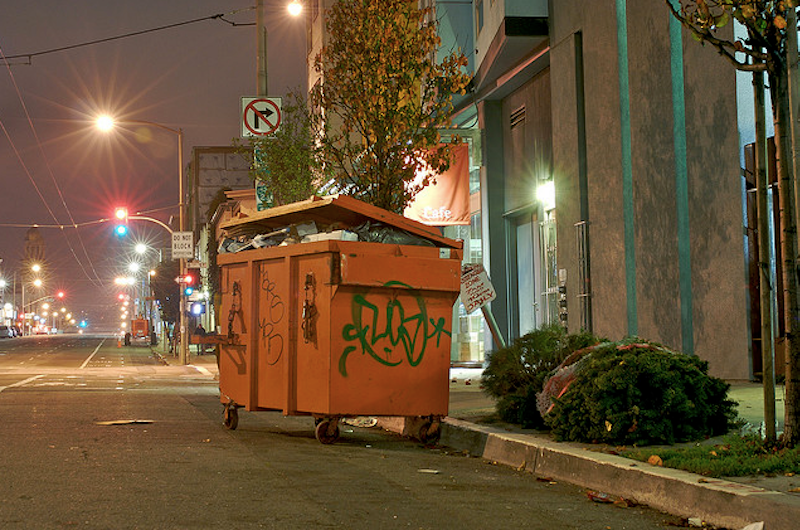 On Jan. 2, a man attempted suicide by jumping from the ninth floor of a building in midtown Manhattan—but a large pile of uncollected trash broke his fall, and he’s merely in critical condition. New York, in its holiday-related negligence, is also a big pillow.

In the weeks following New Year's Day, curbsides across America will be littered with abandoned Christmas trees, their Christ-ridden capacity exhausted and starting to dry. They belong in the compost bin, but short of that, perhaps recycling will do.

Reincarnation, or, spiritual recycling, is examined and embraced more in Eastern religions and philosophies. The idea is that we are all the same atoms, transferring from one shell of a person to another. Western death, more individualized, is followed by a first-class ticket (per the right membership) to the heavens, where Christ and Santa reside.

You can never truly throw anything away—sometimes not even your life. Divine Intervention may be too optimistic an interpretation; perhaps it is simply kind entropy that fell into place (pun intended) for that sad man who tried to kill himself that day. Some say it's slow motion as you're falling; others say it's a fast-forward abridged version of your life. Obviously, a conclusive experience precludes the full report.

Trash doesn't disappear. It ends up in a landfill, some mythical island of capitalism's detritus, where seagulls act as surrogate angels. We are told stories about these landfills, offer political sentiments, but never have to smell it. Soon the trees will be taken away, and we'll forget the story of Christ's birth until his highly publicized birthday bash is more imminent. In the year in between, we'll continue to recycle magazines and newspapers out of vague guilt, and go on with this life in which the sequel is still being optioned. What they don't tell you about reincarnation is if you'll get a nicer nose.

And should some devastated soul be unlucky enough to consider falling, and successfully fall in a cracked splat, a popped sack of red atoms, we'll look away.