The 10-month countdown to the return of this Christmas confection begins... now. 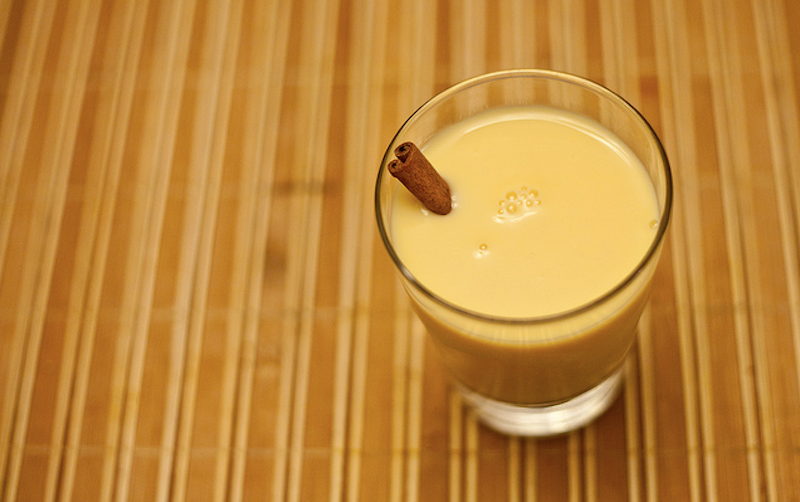 It’s always the same ol’ song with us, isn’t it? We’re together very, very briefly, then for an extended length of time we’re apart, and eventually we re-unite, again, and not very long after that it’s like I’m a military housewife weeping with a yellow-ribbon on my wrist while you’re smoking terrorists outta their Pakistani holes, dashing in camo fatigues and patchy stubble.

For a day. Or maybe three.

Then I’m totally over you, over your creamy deliciousness—and back in earnest to that gnawing sense of wrongness that comes over me while cruising my grocer’s dairy case for a half gallon of two percent, that feeling that something is missing, that there’s just sort of too much pasteurized bone-white on display. You know? And that existential vacuum lasts as long as it takes to check the date on the milk—anything 10 days or more out’s fair game—and hoist the handle and close the case and move on to Yoplait Vanilla. Out of sight, almost out of mind.

For 10 months or so, egg nog? I won’t long for you or think about how you’re, like, drinkable no-frost ice-cream, how you are somehow confectionary dairy in its most pure, unadulterated form, the sweet equivalent of the three-egg-yoke cocktails some athletes gulp down when they’re in training, trying to bulk up.

When I pass the dry egg nog mixes peddled year-round—never tried one, don’t trust those—I’ll allow a brief pang of lust to envelop me, but that’s it.

When I’m slurping down a Cold Stone Creamery shake, I shall not yearn for you.

When I encounter scenes in popular media where holiday revelers delight in frothy steins of egg nog, I’ll do a double-take, because nobody ever quaffs egg nog in popular media, though in all fairness to you, egg nog, would that I’d be drinking you while encountering such a festive, unlikely scene, whereupon I’d spray you through my nose in surprise.

Wouldn’t that be funny?

How we’d laugh. You and me. Non-nutritional holiday beverage and deluded thirtysomething

What a pair we make, even apart.

And then, like a conquering heroine, you’ll make your return. One fine grocery-shopping day, close to Thanksgiving, when I’m trying to remember whether I give a fuck about Thanksgiving. And there you’ll be, stocked alongside the Welfare 2 and the token-brand buttermilk and the diminutive cartons of heavy cream as though you’d been waiting for me to take note of you all year long.

In half gallons. In quarts. In unspecified miniature sizes.

And I will instinctively seize you, but it will be the wrong you—the cheap, watery and altogether less-than-satisfying you—making the same mistake I make every year, but the next you will be high-test, mad creamy, “Heart Attack Man” you, double-dose of Beano you, or coffee creamer latte you, which is less exhilarating but beats no you like a freak-folk Brooklyn hipster in a drum circle.

And for roughly two months, on and off, I will hit you like a crack fiend hits his pipe.

I will work you like Ray J worked Kim Kardashian on that sex tape.

I will slurp you with undue haste, forgetting to savor you the way I invariably forget to savor most fleeting aspects of life. And once again, I will forget to lightly spike you with sophisticated adult refreshments. And suddenly, come mid-January, milk will occupy your daily-case real-estate. You’ll be gone, all gone. Again.