A glimpse at today’s most heavily marketed children’s toys reveals some disturbing trends. 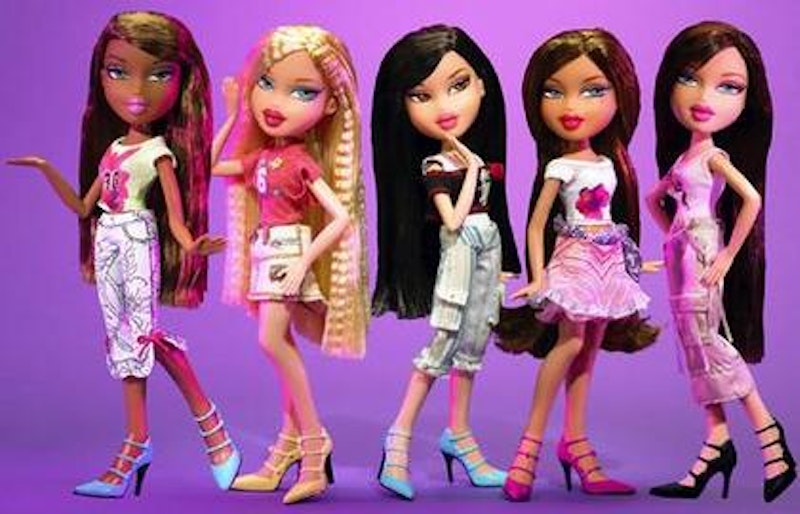 Above: Some of the Bratz doll line.

The future of toys may have changed forever the moment someone decided to mass-market a doll whose most prominent feature was dark lip-liner. Bratz dolls don’t have terribly huge chests or feet that are posed in a position that’s begging for plantar fasciitis, but they emit a neon aura of urban mall-dweller trashiness that makes even Barbie look innocent. Toys R Us-frequenting parents were put out of their comfort zone, not sure if they wanted their kids playing with dolls whose very existence almost necessitated “the sex talk,” but demand increased and the hussie-tastic plastics now rival Skipper and Ken for shelf space. This was back in 2001, and no toypocalypse has yet followed.

Toys certainly aren’t the same as they were back in the 1940s. Barbie prevails, but the spinning tops and “Dick and Jane” of white-bread America aren’t working their way into Generation ADD. But that doesn’t necessarily mean that today’s children are learning from dolls with shiners how to grow up and lose custody of their babies. It may appear that those High School Musical kids are shaking nudie-internet-pic drama into the values of Count Chocula eaters, but some of these frighteningly adult-themed toys might just be overzealous marketing that indicates little about what kids actually use toys for. In order to understand the essence of play, it’s best to examine the types of toys that have lasted decades and compare them to flukes that one can only hope will be tossed aside by fastidious tykes.

1) Toys that allow them to act like grown-ups.
One visit to Toys R Us will make it clear that the baby doll still rules. Along with it are mock cash registers, ovens, construction sets, and doctor kits. There’s even a toy line called “Parents” that makes a set of keys (including a garage opener and a door beeper) that’s designed to be chewed on. Operating a cash register definitely isn’t as fun as chasing a neighbor around with a Nerf gun, but it’s the grown-up power imposed on that toy (combined with the joy of primary colors) that makes it worthwhile during playtime.

2) Bodily functions.
Probably at least one in five baby dolls can pee. The “Little Mommy Real Loving Baby Gotta Go Doll” even comes with its own toilet. Other than peeing, baby dolls can blink, take in food, say a word or two and move their heads. Bratz baby dolls can even burp. What was once merely called a “stuffed” animal now needs a new category, because many animal toys aren’t too huggable but do seem to mimic some sort of agency, or at least a propensity to be classically conditioned to learn tricks, sniff at food, and grab food from a kid’s hand. See Biscuit the Fur Real friend.

Why do kids like to see orange juice come out of plastic babies and sadly mechanical dogs do the same things over and over? Seeing that they’re just coming off of getting their nappies changed, they probably like the rush of controlling something else’s hungers and uh, leaks.

3) Imposing fantasy worlds on inanimate objects.
Beanie Babies, figurines from Disney movies, Star Wars toys, anything that you can collect and line up in any sort of order are a delight to children. With such null, lifeless artifacts they can re-create the plot of The Rescuers, their own experience of receiving detention in school, or countless other pseudo-sadistic games of kidnapping, wars, and cat fights. But look up “violent children’s games” and you’ll only find links about how badly video games affect children’s behavior. Challenge: watch kids play for one hour with a Rainbow Brite doll and you’ll see that the violence was there anyway, no Grand Theft Auto required.

4) Tiny versions of real things
Observe: Littlest Pet Shop, Polly Pocket, Matchbox Cars. Tiny toys separate the kids who put things in their mouths and choke from the kids who can keep their cool. Just kidding. Tiny toys take boring things out of their own context and make them seem novel and magical.

However, the recent big-head-ification of tiny toys remains unexplained, but is possibly related to the introduction of anime. Observe: the new Littlest Pet Shop line’s big-headed specimen.

Play is about power and imagination. Kids don’t know what’s real and what’s not yet, but they definitely know that they’re small and meek in a world of tall people. In play, they can escape that and make their own rules.

Compare those toys to a few heavily-market ones that ignore basic kid needs in their quest to impose bells and whistles of technology and commercialism onto playtime. Toys like these are cropping up rampantly, but do kids actually like them?
1) Toys that use too many pulleys and tricks of physics.
You’re sitting at McDonalds and the toy theme is Indiana Jones. You get some kind of plastic car that has a lever you can pull and it flies across the table, pushing a few packets of salt on the floor. In the car, you lose the lever and throw away the rest of the toy. Anticlimactic.
2) Toys that regurgitate trends of the plastic-surgeried older generation.
Two words: Tini Puppinis. Watch the commercial and feel inexplicable fear:

3) Toys that promise to defy genetic determinism. (AKA toys marketed to rich parents)
One study actually found that kids who watched “Baby Genius” videos had smaller vocabularies. The researchers were sued.