Ad Writers: The Worst Liars in the World

Only they could praise a beer for "drinkability." 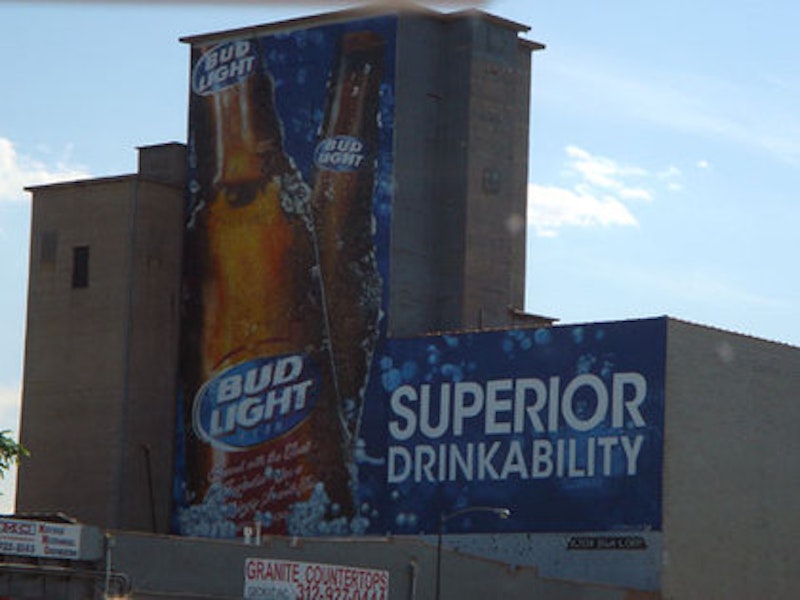 Photo from The Hot Iron.

Let’s say you work for Coca-Cola designing television advertisements for their flagship product. Now, Coke doesn’t really change. There isn’t a lot of new information to present to the public about Coke. Everyone’s drank it, most people like it; it’s a fixture of American society. And yet you, as part of the “creative” team, are expected to go in every day and craft a two-and-a-half minute video meant to animate the viewer’s sympathy and showcase the unchanging nature of the product. It’s the sort of task that, were one to assign it to a uniformed soldier captured on the field of battle, would be in violation of the Geneva Convention.

So I have sympathy for ad executives despite the fact that, as a profession, it seems to consist largely of people who couldn’t make it as child pornographers. But my wellspring of sympathy is not depthless, and the following commercials were too much even for my sensitive temperament. What follows below are not bad commercials, or stupid commercials, or even tasteless commercials, any of which a single hour of network television could provide a lifetime of study. No, these are commercials which are so incoherent as to make the viewer wonder whether they were not created as part of some strange social experiment to determine the gullibility and foolishness of the American public.

Be prepared to shave a few i.q. points off your total as you continue south.

I'm sorry—did The Royal Caribbean Cruise Line just ask me if I wanted to commit treason?

What exactly is the pitch for this commercial? You want me to give up my membership in the Union and join your new nation, located on a fleet of luxury cruise liners? Who is this commercial aimed at—Confederate sympathizers and Todd Palin? I don't care how friendly the narrator sounds, his chant could very easily turn ominous. “Why not ice-skate on the equator, sunbathe past glaciers, stockpile arms, shoot the president-elect.” Yeah buddy, I know where you're going with that mellifluous tone.

Bottom line, Royal Caribbean Cruise Company, is that I don't care how many killer whales you have frolicking in front of architectural landmarks from coastal cities throughout the world—I am a citizen of the United States, and I am not interested in giving up my birthright.  Even if your new nation is all-expenses-paid.

I don't mind being lied to by commercials. I expect a certain amount of exaggeration and even get a little annoyed if it’s not forthcoming. It’s like when homeless people have funny signs. Ha ha buddy, but I don't know what joke you think we're both in on; one of us is begging the other to give them money.

But this Drinkability thing is a step too far, and not just because it’s a rape of the English language unseen since Jodie Foster’s turn in The Accused. If we don’t stop this thing here, where will it go? What new desire that you didn’t know you had will the people at Anheuser-Busch create a product to satiate? Will they invent a sixth sense to gratify? A new type of flavor to compete with sweet and sour? Unless you're accustomed to the odd habit of mixing parking gravel with your beer before you swill it, any liquid you drink has to rate pretty high on the “drinkability” scale.

The first couple of these made sense: the guy has to live in a shitty apartment because he failed a credit check for a better one, he can’t get a car because his credit is bad. But I’m beginning to wonder if the people making these commercial understand what exactly a credit score is.

What is the crux of the advertisement? That this asshole and his friends would be millionaires if someone hadn't gotten a VISA under their name? And what about the guy on the turntables? Why is having a 200 credit score a barrier to becoming a successful DJ? What auditions are you going to where they make you fill out a full credit report anyway? Maybe it’s this inclination toward giving out your entire financial history to strangers at dubious provocation that’s gotten you in trouble in the past.

This whole thing is a big crock of shit. I mean, I sent in my money, and I didn't get no baby African. All they sent me was like, a postcard of a child smiling or some shit. I don’t want to “sponsor,” I want to “own.” Isn't this false advertising?