A Tool to Deceive and Slaughter

A piece of obtuse contemporary art captures the zeitgeist. Sort of. 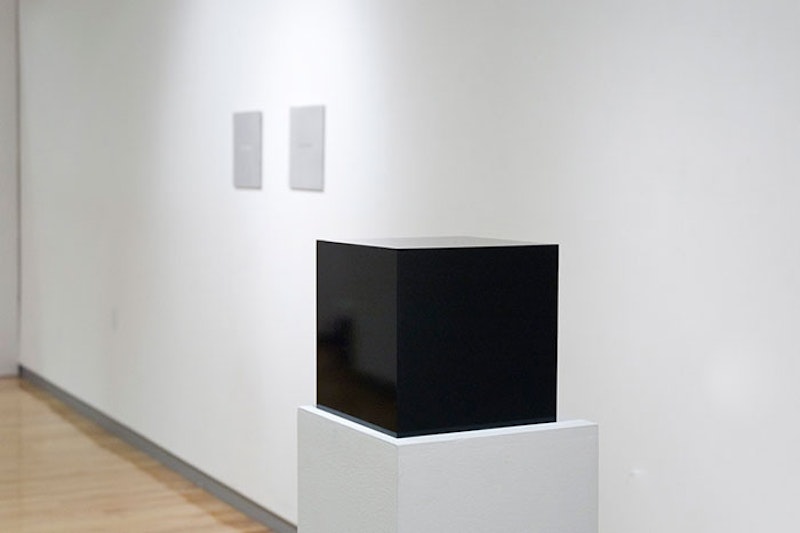 Combining Robert Morris’ Box With the Sound of Its Own Making and Baudrillard’s writing on the art auction this sculpture exists in eternal transitional flux. It is a physical sculpture that is perpetually attempting to auction itself on eBay.

Every ten minutes the black box pings a server on the internet via the ethernet connection to check if it is for sale on eBay. If its auction has ended or it has sold, it automatically creates a new auction for itself.

If a person buys it on eBay, the current owner is required to send it to the new owner. The new owner must then plug it into the ethernet, and the cycle repeats itself.

Wow. A Baudrillard quote from the essay I link to above:

The ruling classes have always made sure of their domination over values/signs (archaic and traditional societies) or they attempted (the capitalist bourgeois order) to consecrate their economic privilege into a privilege of signs, because this ulterior stage represents the realized stage of domination. This logic, which continues the logic of class and is no longer defined by the property of means of production, but by the control of the process of meaning...we find it entirely ...in the auction of the work of art.

That’s a slightly long way of saying, “those with a lot of money get to decide what is worth a lot of money”—also, “marketing is manipulative” and “branding is key.” Earlier this year I wrote a column on the Errol Morris-directed Miller High life ads, wherein I talked about how the ads stand athwart between wink-wink-we’re-selling-you-something marketing and actually, you know, selling you something. Since around the birth and subsequent logarithmic explosion of YouTube in 2005 the hyper-acceleration of online popular culture has reached something of a golden era, and with it the smell of cognitive dissonance and nihilism—nothing is sacred except that which is anointed by the wisdom of anonymous online crowds, advertising is looking more like film, and the layers of meta are so thick the original question is quickly lost in the maelstrom.

I guess the artwork in question and the subsequent digging for obscure and esoteric essays on art and culture relit the fire that produced this rumination on the past decade:

The rise and subsequent ubiquity of hipster nihilism, at once so trivial and enlightening, has launched a thousand ironies and sarcastic asides. People at Walmart, FAILBlog, Stuff White People Like, Hot Chicks With Douchebags, Texts From Last Night and Lame Book are have made some big splashes in the arena of “holy shit, you have got to see this.” Because pointing fingers and laughing is as old as civilization, the context is nothing new, but the action’s diversification and sophistication has reached a whole new level. Ever since Facebook and MySpace socialized quasi- to not-so-quasi creepy Internet stalking, Internet culture is OK with constant humiliation. The prevailing wisdom is that everyone is an idiot, that passion without awareness is a laughable pursuit. In fact it’s gotten out of hand, and in some ways that’s a good thing.

So. The artwork in question. I find it to be pretty exceptional in that it fits seamlessly into the culture I (less successfully than Baudrillard) have tried to define. Not since Damien Hirst’s “For the Love of God” has an artwork so deftly pointed out how the art market, popular culture and the arc of aesthetic taste are so wonderfully irrational:

8,601 flawless pavé-laid diamonds, weighing in total 1,106.18 carats (221.24 g),[3] over a platinum cast, cover the entirety of the skull, with the exception of the original teeth of the skull. At the centre of the forehead lies a pear-shaped pink diamond, the centrepiece of the work.

(The skull always struck me as the most expensive pun in history. Diamonds in one’s teeth is a pretty ubiquitous expression of trashy luxury, and every square inch of this skull is covered in diamonds except for the quite-real teeth.)

Larsen’s “A Tool to Deceive and Slaughter” wouldn’t be out of place in a Hirst factory. Even its epically melodramatic, moodily philosophical title is similar to “For the Love of God,” “The Physical Impossibility of Death in the Mind of Someone Living” and “The Virgin Mother.”

“A Tool to Deceive and Slaughter” is tangibly linked, via Ethernet, to the intangible world of taste, aesthetics and worth. It doesn’t matter if the work becomes astronomically valuable—you’re legally required to keep putting it up on eBay once a week until someone else buys it. The argument is you can’t own anything conceptual, neither in copyright or theoretical terms, and the artwork’s logistics ensure that no third party—the highly ridiculous art market—can change that.

At the end of the day  “A Tool to Deceive and Slaughter” is a wonderful conversation starter/column subject/”hmmmm” moment. And perhaps its best irony is that you don’t have to chalk up thousands of dollars to own the artwork’s concept—you’d just be buying, for a week, some acrylic, wood, and wires.

(Oh, right. The College Humor video came to mind because the artwork, like the sketch, makes physical the ethereal nature of the art market and online culture, respectively. Or something like that.)