We Still Need You, Angry and All

A farewell to Double Dagger. 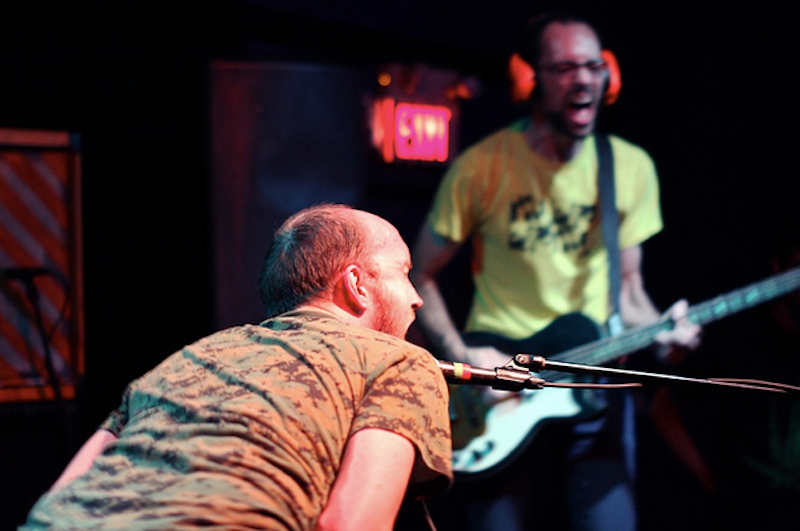 The first time I saw Double Dagger was at Hampdenfest 2006, in the middle of the day outside a 7-Eleven in Baltimore. This was the only seated Double Dagger show in my memory. I was immediately drawn in and excited about them; At the Drive-In was probably my favorite band at the time, and the essence of why that band was so powerful—heavy, melodic songwriting; an iconic aesthetic; and wild, careening energy—was right in front of me on 36th St. Nolen Strals, still rocking those sweet sideburns and mime stripes, looked like an art school Ed Gein, maniacally screaming and flailing himself amongst scared moms. I remember specifically a mother clutching her child in survival mode style, like her life depended on it. I had never a seen a band that actually scared people like that, let alone one that wrote truly glorious kickass songs. And they looked and played like rock stars. I’ll never forget hearing “Luxury Condos for the Poor,” their signature song, for the first time at that show and searching in vain for any bootlegs online.

I saw them probably 20 times in the five years since, and not a single one of those performances was anything less than exhilarating. Everything about that band just made sense, despite its odd self: Bruce Willen’s granny bass and its highly distinctive bruised, warm tone filled rooms without any need for guitars, and Denny Bowen’s hard, tight, and precise drumming kept them from sounding limp or sloppy like so many pissed off hardcore bands. Double Dagger worked because they were so specific—angry but catchy, sarcastic and sincere, visually appealing and aesthetically pleasing—and like all great musicians, they created a world for their songs and performances to exist in. A world of art school girlfriends, stellar graphics and design; sundry posers, fakes and charlatans; political and socioeconomic injustice; and 21st century ennui. Strals was the closest thing Baltimore music had to a Thomas Nast, a rare upstander in a sea of vacant-minded party bots uninterested in the world outside the blogosphere.

Their last show at the Ottobar this past Friday was sad and sweaty. Really, it just sucked to see such a pure band die at its peak, even though that’s how it should be done. Noses were broken, glasses were smashed, and there was no overload of sentimentality: Strals skewered a few who booed Ottobar promoter Todd Lesser, and a pack of glazed kids who wouldn’t stop clamoring for “The Psychic.” Double Dagger remained true to themselves even after underground bands became just as big shameless shills as the stilted skeletons of at the top of corporate rock. They didn’t bother pandering or blowing anyone to get a higher point score, and that so many journalists choked trying to categorize them shows how truly once-in-a-lifetime Double Dagger was.

Strals, Willen, and Bowen never made it onto late night TV or an ATP, but the impact they had here in Baltimore and on the people that saw them around the world was far more intense than puff pieces in Fader. They were rock stars in every way, and you knew watching them they’d one day become a cult obsession like Suicide, Crass, Rites of Spring, At the Drive-In, or Operation Ivy, so buy that Ragged Rubble LP while you still can. It’s sucks, but bands this aggressive and genuine are really M.I.A. right now. I hope people will heed Willen’s advice and start a band to fill that void.