The temporary exuberance was thrilling in Baltimore, but now it’s back to de facto segregation. 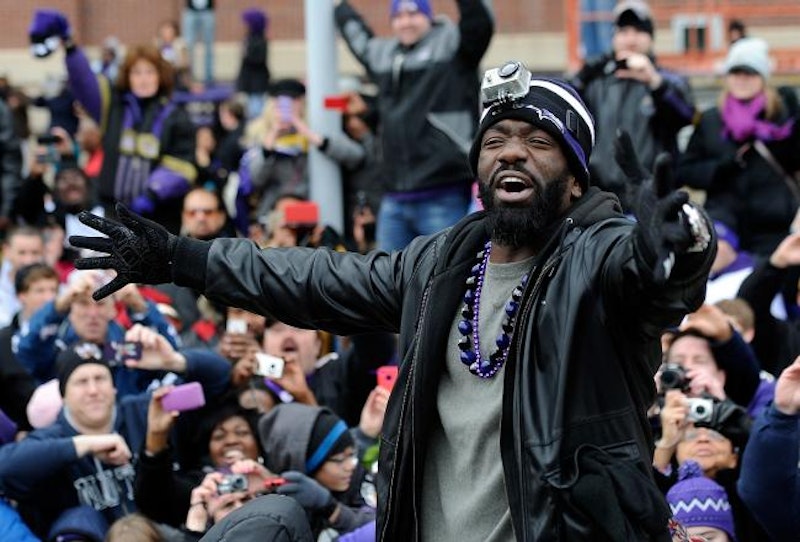 Morning in Baltimore? The Ravens winning the Super Bowl after years of playoffs frustration has made the city joyous and residents proud to live here, even if most Americans apparently have no idea what state our city is in. Diehards, fair-weather fans, artists, musicians, drunkards, drug addicts, and drug dealers joined in passion together for a simple form of happiness and easy good news. It's a hit, a bump of something nice that has already begun to fade and dull after the Feb. 5 parade, which drew 200,000 people to M&T Bank Stadium and environs. I walked down to the Stadium from Mount Vernon and south of Lexington Market was choked with people: families of four covered in purple head to toe; randos with shrunken faces and tiny hands; the kind of weirdos you only manage to see on a busy day; big, hulking tree-trunk men with nothing better to do than take off work to drink in the streets; their obedient wives, malnourished children; and the men who fly solo, who live their whole lives thru their teams. This is their day, too.

The parade was supposed to begin around 10:45 a.m., at least that's what I was told: the Ravens didn't leave M&T until around 2:30 or three, and by then I was back home, tired from walking for four hours but excited to dig into the haul I got from a bookstore liquidation sale at Calvert & Fayette Sts. Despite the leftover excitement from the Ravens’ weird win over the 49ers, in parts of Baltimore it felt like any other day, except for the exceptional foot traffic, which felt strange in a city that often looks totally deserted. People didn't seem any happier, in fact everyone looked like they were at the airport. Snarled traffic, immense crowds, and vague waits made me bolt before I saw the Lombardi trophy stroll down Pratt St. thronged by thousands of cheering Baltimoreans—maybe waiting along the Harbor would've been worth it just to see everyone ecstatic, albeit experiencing it through their smart phone cameras, just as the players were.

I don't follow sports closely and I prefer baseball to football, so I'm disconnected from it, even if I supported the Ravens and wanted them to win for the city's sake. I always thought another Super Bowl win would be great for the city, obviously for the dosh, but there are so few opportunities for the whole city to come together and be proud of it. We're coming down now from that high, all the suburban dwellers that ventured bravely into the city are gone and our racial/social stratification is as bad as ever. Who gives a fuck that the Ravens won if people in Pikesville think you'll be eaten alive at Charles and Preston Sts. anytime after dark, or that the best The Onion can come up with is "Baltimore Looking for Safer City to Host Super Bowl Parade"? We need to feel proud about living in Baltimore, and the hoopla is false hope, even if these past few weekends have been a blast.