Baltimore’s Mayor is Mixed Up And Confused

Rawlings-Blake wants more budget cuts, even while people are returning to the city. 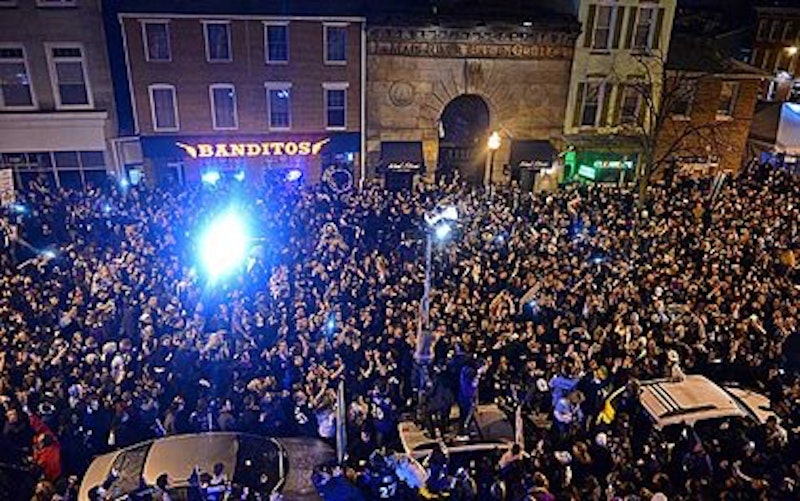 It cost $460,000 to discover that Baltimore is going to hell in a hurry. The latest consultant’s report can rest on the same shelf with the $500,000 tourism study a few years ago that produced the advertising slogan, “Get In On It,” that hasn’t been seen or heard since. The newest report’s price tag is helping to accelerate the journey.

That’s a million dollars of taxpayers’ money that could have been better spent on goods and services unless the $460,000 statement of the obvious is outside back-up material for what Mayor Stephanie Rawlings-Blake had in mind all along—to join the national trend to chip away at workers’ retirement security and benefits that were won at the bargaining table.

Actuarial reports rarely involve human considerations. The newest fashion in government is the Darwinian notion that screwing people improves the breed as well as the financial picture. The latest statement of looming disaster was prepared by the pencilnecks at Public Financial Management, Inc., of Philadelphia, which apparently specializes in telling municipalities that they suck at financial management. So here we go again with what in Maryland has become a tiresome bureaucratic cliché, “structural deficit,” the gap between projected revenues and spending.

The newest rendition says the city will be $745 million in debt over the next 10 years, according to reports. And the figure leapfrogs to $2 billion if infrastructure needs and—here comes the kicker—liability for retiree health benefits and pensions are included. Unless the folks at PFM have an Ouija Board or a crystal ball, the figures are purely speculative. They’re as much in the dark about fickle economic forces as the rest of us. But one thing has proved profoundly true: Cutting government spending hurts more than it helps.

Even more stunning is the report’s revelation that the city has enough money in reserve to cover the $745 million structural deficit that, the report argues, would deplete the cushion in three years. So, if the money is in the bank where’s the deficit and, what’s more, if there’s three quarters of a billion dollars stashed away couldn’t it be construed as over-taxation in a city that claims to be impecunious?

So Baltimore now has the foundation to join other backwater states and cities as well as Republicans in Congress who want to destroy the nation’s social safety net that has been a lifeline for the middle class since the 1930s. More to the point, such moves are further stabs at unions and their declining strength that have led the fight for workers’ rights and benefits and helped to create the middle class in America. Wage inequality and social immobility are in direct correlation to the decline of aggressive unionism.

Cities go through cycles. There is a measurable rhythm and resiliency to their decline and fall and their eventual redemption and return to grace. Baltimore, for all of its natural attributes and ditzy grandeur, had the misfortune of geography by being a designated pass-through city between Philadelphia and the District of Columbia. It is, simply put, not a destination city.

But cities are back. They’re fun, they’re alive and they’re on the move after five years of economic uncertainty and near collapse of the economy. They may be down-at-the-heels one year but pulsing and vibrant the next. When the Ravens won the Super Bowl, youthful celebrants didn’t head for Towson or Owings Mills. They gathered at Federal Hill and Fells Point. And over the recent holidays, the streets of Harbor East’s mini-city were alive with hordes of happy, celebratory visitors.

Ashkenazy Acquisitions, a New York investment firm, just paid $100 million for Harborplace and another $25 million for the office and commercial components of the Village of Cross Keys. Major retailers are headed for the Canton and Remington neighborhoods. The Rotunda is about to undergo a $100 million makeover in a rapidly gentrifying area. Muffin man John Paterakis continues his push along the luxury strip from Harbor East toward Fells Point. And Johns Hopkins is investing millions in resuscitating a huge swath of East Baltimore. Houses and condos anywhere in sight of the harbor’s edge are regularly fetching upwards of $1 million.

Rawlings-Blake has a grandiose plan to attract 10,000 new residents to Baltimore by the end of the decade, a city that has lost more than a third its population since 1950—tumbling over 60 years from 950,000 to 619,000. But that might be wishful thinking as long as property taxes are the highest in the state—double those of any other county—and public schools remain inferior. People who can’t afford costly private schools pack up and head for the counties. Rawlings-Blake has also pledged to reduce property taxes by applying proceeds from the as yet unbuilt casino in Baltimore.

In Baltimore, one-third of the population pays all of its taxes, one-third pays some taxes and one-third pays no taxes at all. That is due, in part, to a generous state tax credit system designed to keep homeowners in their houses. The Homestead Tax Credit program caps property taxes on owner-occupied residential dwellings. And the Homeowners Tax Credit Program provides substantial property tax breaks for low income individuals and families. Both programs help to account for the imbalance in those who pay taxes and those who don’t. In addition, there are an estimated 16,000 vacant properties in the city.

There’s energy and activity in Baltimore as the city constantly reinvents itself that financial analysts don’t consider as they peer through their eyeshades over spreadsheets and printouts. If the outlook is so bleak and the city is headed for financial disaster, as the report indicates, outsiders wouldn’t be investing hundreds of millions in what H. L. Mencken described as “the ruins of a once great medieval city.”

For years, state government, because of a couple of irresponsible decisions by Gov. Parris Glendening (D), unnecessarily cutting the state income tax and failing to fund the Thornton school aid program, endured a decade of structural deficits. They were eventually turned around and wiped out this year through budget cuts and tax increases. True, the city does not have the same taxing authority as the state, but time and good fortune could overcome the dire assessment by PFM without further stress on taxpayers or retirees.

Consultants, as they say, are out-of-towners who charge a lot of money to come and tell you what you want to hear. That seems to be the case with the report on Baltimore’s finances.