Who Will Save the Children?

Bill Watterson, Orson Scott Card, and the difference between imagination and wisdom. 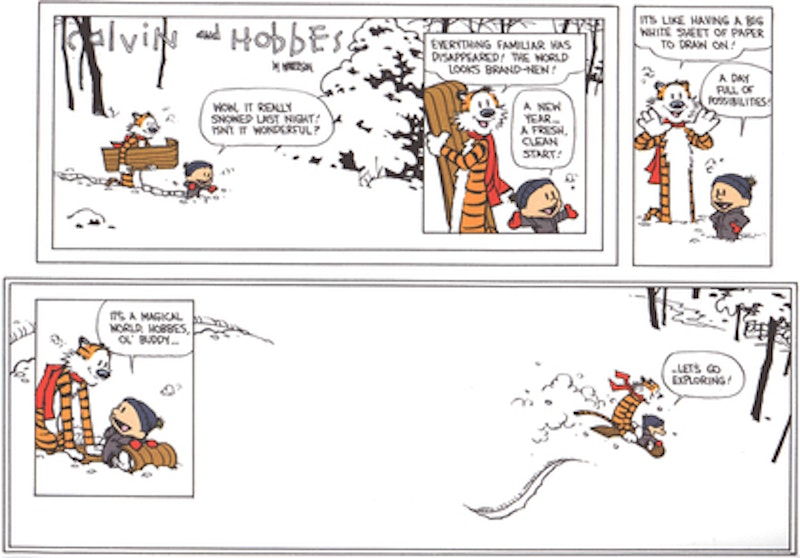 There are two authors I credit for much of my childhood’s accumulation of vague, life-affirming/directing wisdom and wit: Bill Watterson and Orson Scott Card. “Calvin & Hobbes,” Watterson’s comic strip that ran from 1985 through 1995, is a prescient icon in my generation’s vocabulary. By the time we developed a sense of self, there was Calvin, a six-year-old, trumping our imaginations as well as galvanizing them, throwing out SAT words before we had the PSAT (or the god-awful Stanford 9). Sledding and wagon riding were idealized, with subsequent existential pondering a given. Over and over, Calvin and his Hobbes wound up in a ditch, scraped and somewhat broken, but ever ready to get up, climb the hill and do it again.

I was a ferocious reader, and part of that habit relied on rereading dozens of my favorite titles. Many of those were, or course, “Calvin and Hobbes” collections. And so Calvin’s vocabulary meshed with mine; I learned from him, followed his lead and came to trust in the power of developing idiosyncratic quirks, both verbal and imaginative.

In a way, Calvin is an odd compatriot of a certain Ender Wiggin, the protagonist of Orson Scott Card’s iconic, genre-redefining Ender’s Game. In Card’s universe, child geniuses are immensely more intelligent than adults, on the rough premise that their brains, if developed correctly, are capable of learning dozens of languages, commanding armies and ruling nations. Ender’s Game takes place in a commander training school in the asteroid belt. The children (almost all boys) take classes, but the very point of the school is the system of faux battles that take place in a zero gravity chamber. Basically it’s capture the flag with laser guns that “freeze” their targets until the battle is won.

The brutality of their pecking order is the other side to their shared genius. The fantasy of going to school in space and fighting mock battles in zero gravity is ultimately grounded by the fact that the children still act like children. They are sexist, intolerant, violent and vicious. As someone who went through a relatively similar experience in elementary school, Ender’s Game is only half science fiction—the other half is the straight truth: children, especially boys, are awful to each other.

If Watterson manipulated the interior dialogues of children (Hobbes only came to life when no one else was around) in order to cordon off a safe corner for children to indulge those same dialogues, Card channeled the realities of childhood experience through the safe medium of science fiction, believing, as did Watterson, “the unfailing assumption that children have a limitless imagination.” Their words and images are different means to the same end.

But Card fell from my esteem when I realized his fanatically vehement stance against gay marriage. (This was right on the heels of a family wedding sans one cousin and her uninvited female partner, which was uncomfortable for me.) The Mormon Times, an online publication and weekly print insert in Salt Lake City’s Desert Morning News, ran an editorial by Card that, simply put, is a religious wolf dressed in a political sheep's clothing.

He starts by equating gay marriage with abortion, writing:

At first, it was only early abortions; within a few years, though, any abortion up to the killing of a viable baby in mid-birth was made legal.

Not only that, but the courts upheld obviously unconstitutional limitations on free speech and public assembly: It is now illegal even to kneel and pray in front of a clinic that performs abortions.

Do not suppose for a moment that the "gay marriage" diktats will not be supported by methods just as undemocratic, unconstitutional and intolerant.

There is, obviously, no mention of clinics being blown up, the physical and emotional harassment of women or the vicious blacklisting of doctors. Regarding Massachusetts and California accepting gay marriages, Card rails over the “obvious overreach by judges, far beyond any rational definition of their authority, that even those who support the outcome of the decisions should be horrified by the means.” He then qualifies the term “homophobe” as a mental illness, and as such shouldn’t be used for a guy like him that is so darn rational and pro-democracy. This is, of course, a red herring. He slips this in:

Here's the irony: There is no branch of government with the authority to redefine marriage. Marriage is older than government. Its meaning is universal: It is the permanent or semipermanent bond between a man and a woman, establishing responsibilities between the couple and any children that ensue.

The laws concerning marriage did not create marriage, they merely attempted to solve problems in such areas as inheritance, property, paternity, divorce, adoption and so on.

If the government passed a law declaring that grey was now green, and asphalt was specifically designated as a botanical organism, would that make all our streets into "greenery" and all our parking lots into "parks"?

And his fait accompli?

With "gay marriage," the last shreds of meaning will be stripped away from marriage, with homosexuals finishing what faithless, selfish heterosexuals have begun.

…
It's about grandchildren. That's what all life is about. It's not enough just to spawn—your offspring must grow up in circumstances that will maximize their reproductive opportunities.

There’s no need to itemize every moment of outright intolerance, ignorance and sheer stupidity in Card’s writing. It’s not necessary. His is a breed being pushed, ever so slowly, to the margins. Card feels, quite surgically, that creating more children is what our existence is all about, and right behind that is what we pass on to them. Somehow, we’re all doomed if the gays marry. Homophobia, meet your Big Bang (or, as Calvin would prefer, “horrible space kablooie”).

So we’re left with Card’s literature—still as significant and fertile as it ever will be and will certainly be included in my hypothetical child’s bookshelf as a means to teach parables Card seems to forget when he voices his other opinions—and his anti-gay marriage sentiments, which will be left to rot in their own intolerance, forgotten by time and posterity.