The thin line between heartbreak and embarassment, as viewed from a VW Beetle between Michigan and L.A. 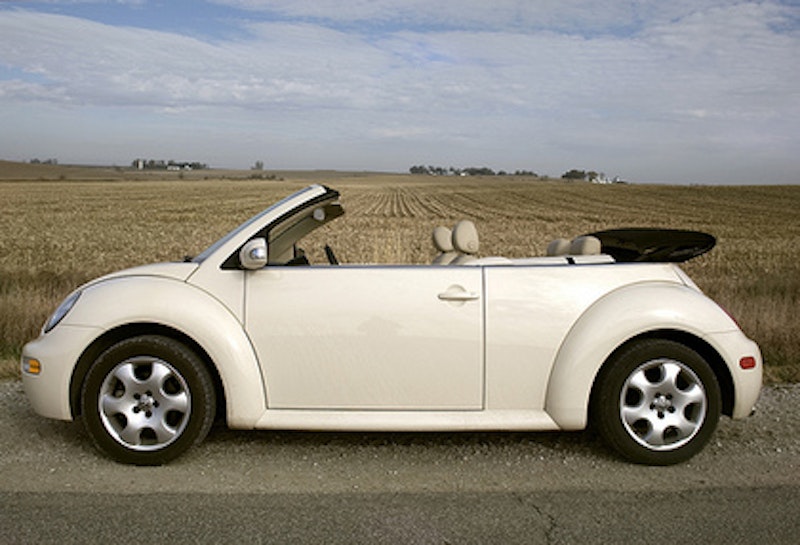 It didn't work. That's the conclusion of this story.

The goal of the second phase was to drive across the country, from Detroit to LA; from The Middle West across the pressurized airlock of The Middle and back to the West Coast. To reconnect with an America I had avoided since I settled in California. To push the reset button on my time in Los Angeles. To up-rock and re-invigorate. And to ponder the results of Phase One. Which, as I just said, didn't work.

My traveling companion for Phase Two was a cream-colored Volkswagen Beetle Convertible, which in the interest of personifying I named Edna.

I had hope that Edna would spring back to youth when we got to LA. But in pre-dawn Detroit, with her black shawl wrapped around her torso, her two round opera glasses dim in the pre-dawn fog, Edna seemed lethargic and happy to stay in the right lane.

Inside, the only clue Edna was a VW Beetle was her vast dashboard, which had enough space to host a Nativity Scene. Outside, she was an old woman, a patron of the arts. As odd of a traveling companion as if I was actually traveling with a woman and not a car.

Before the girl left, before she ran out of the car at the end of Phase One, when there was still hope, she said, "I hope you know I'm going to write about this."

As I see it, all the potential for revenge offered by prose was acknowledged, accepted and forgiven there and then.

Gas stations, I saw immediately, would pose a problem.

Our maiden fill-up came before seven on an overcast Detroit morning. I pulled next to what I thought would be a friendly Astro-Van. I didn't notice its owner until I popped the cap and walked over to swipe my card. He stood in a Red Wings jersey, work boots and shorts in the 41 degrees chill, pumping the shit out of some gas while all the time growing facial hair and thinking about construction.

I wished I had pulled up listening to something more masculine than "Moonlight Mile," but I knew that no amount of Rolling Stones could wash the "fag" from my car.

But the Astro-Van Man didn't seem to notice me at all. He talked to his passenger, excited about the prospect of paying $2.10 for a gallon of gas. He didn't comment on the cream-puff color of my car, nor did he break down the buyer profiles for the 2004 VW Beetle Convertible, pointing out that they skewed female. He didn't guess (correctly) that I live in Hollywood. He just pumped his gas and drove off.

Maybe it was just, you know, a fucking car.

Things I Will Never Get To Tell The Girl:

— That I love her or even 'like her' like her. All of that stuff isn't true anyways.
— That, regardless of the above, all it took to get me to fly across the country to see her was for her to ask me. Once. On Facebook.
— That I spent one full month preparing for the trip: Packing, a nightly regiment of push-ups and sit-ups, flossing, lining up a few anecdotes to tell in case of conversational lulls, quitting my job…
— That I was not staying for just one night. That I planned a second phase of my trip, a cross-country road trip in my mother's convertible, so that my response to, “I wish you could stay,” after the first romantic night could be, “I will.”

You come to realize that there's a fine line between creepy and charming. Two people can plant the same platitudes or show up at the same door with the same roses and there's only one way to guess the reaction they'll get. The only difference between the two is attraction: If the object of your affection thinks you're attractive, your romantic pursuit will be charming. If they don't, it'll be one or two surprises away from stalking.

I've thought about this. Readers unnerved after reading the above list can rest assured: I'm attractive. She told me so herself.

Michigan held onto her last breath of autumn for Edna and me. The hunters and their sons trucked along the state's highways and filled up at its gas stations.

As before, I looked at their Carhartt and their mustaches and expected a fight. What I got was all downward looks and indifference. The same as if I had been driving a Ferrari or an F-150.

The girl wanted adventure. That was the reason I wanted the girl.

She sent me a note a week before the trip challenging me to show her something on campus she had never seen before. That set me on fire, her formal invitation to a romantic contest. I told her I would show her three.

You wake up, realizing that you've spent the last 60 miles behind a tractor-trailer going five under. The road does that—the drive gets in the way of your thoughts, your thoughts make you forget the drive. As you go on, these thoughts become more and more fragmented. There are long stretches where only blank memories are created.

So you clear out the old fast food to make way for the new fast food, you signal for the left lane and move on. You drive away from it all.

The first adventure was on the outside of town. At the end of the 90s, an eccentric millionaire commissioned a sculpture of a spaceship in the middle of a manicured field accessible only by a hike through the woods. Apparently, the millionaire and his wife rode horses to the spaceship pavilion once a year to have drinks with the local wine club. On previous trips, I've been worried that I'd venture there on that same day, but it was the end of October and the only people drinking wine under the stars that night would be trespassers.

I cracked a glow stick to mark our path through the woods. The girl held my hand and we crossed the clearing to the ship. Everything was going so well.

I planned to feel more connected over the drive. But the road divides and separates and pushes you away more than it connects. The only time you feel connected is at gas stations and fast food restaurants.

The second was the roof of the School of Music, a bunker in the middle of the wilderness. To climb to the top, we had to sneak around two levels of floor-to-ceiling windows and a dozen music comp students working late. We went up two rickety staircases and over one concrete ledge before getting to the roof. I carried a bottle of Spanish wine in my jacket. And so we drank the bottle, sitting under the stars, before climbing down unseen.

I'm sure this girl has a side, too. I'm sure she shared it with her friends (some of whom used to be my friends). I'm sure that if she told it to you it would be compelling and convincing. But I was the one who was rejected. That has to be worth something.

I didn't think it could get any better. I was falling in love with me.

The third was at the Museum of Natural History. My friend gave me two keys to the back door, so the girl and I snuck in. It was late by that point, all the curators were long at home, with only the research students and the night watchman inside. We ran through the main exhibit hall, revealing the large Tyrannosaurus skeleton with the light from our cell phones. We hid at the slightest sound, spending long moments huddled together among the artifacts. It didn't matter if the sound was researcher or night watchman, or if they even had a night watchman. It didn't matter. I was scared and I was brave.

And then it got better.

She wanted to drive, so we took Edna down for a moonlit drive by the riverside, putting the top down in the still weather. We talked about politics and tried not to crash from all of the wine and revelry.

And then it got better.

Somehow, the night's adventures left us enough time for last call at the best bar in town. We sat at the counter and talked about how rare it was to find someone truly special. In the warm light, the girl never looked better. As we left, I felt a sense of triumph. As if I had given that last full measure of devotion. That everything I could do had been done and had been done well. It felt like victory.

It was getting late and Edna and I were both getting tired. Nebraska was as flat and sleepy at midnight as it was at noon, but at least the cows were grazing in the middle of the day.

The girl and I drove to our last stop, the parking lot in front of her apartment. We kept talking—about her ex-boyfriend (a good friend of mine) and her parents and her insecurities and doubts. We were connecting, more than ever.

It was getting late. The digital clock above the dashboard read 3:46. The time had come—if I could travel halfway across the country, I could at least ask if I could go inside. So I did.

Her response was an unyielding, "No."

I was hit hard, confused. I said that I thought I had done everything right. She said, "Right for what?" Of course, I didn't have a real answer for that. She said, "There's never been anything physical between us." That, I knew.

At this point, I was drunk and tired. I no longer card about sleeping with her; I just wanted to sleep. I asked if I could just come in and crash. She responded, "We both know you have other places you could stay."

She said something about how she still wanted me in her life, that she still wanted to be friends. I remember thinking, "If you thought tonight was just me being a friend to you, of course you would still want me as a friend. Anyone would." She thought I could still take her headshots, that we could still see each other when she came out to Los Angeles. I told her that if she came back to Los Angeles, I wouldn't call her. She got out of the car and ran back to her house. I remember hoping she was crying.

And that was it. I didn't want to wake anyone up at four a.m., so I drove an hour to my family's lake cottage before realizing that I didn't have the key. So I slept in the car.

Back in Nebraska, I was falling asleep at the wheel. Even Robert Plant and Jimmy Page were having trouble keeping me awake. It just wasn't working. I had to pull over and the highway rest area looked like the only place.

At least, I thought, this whole mess would make for a good story. So I turned the warm air to full and switched on the heated seats. The heat would escape from the canvas top in a few hours and the chattering of my teeth would eventually wake me up, but at least, with Edna, I knew I always had a place I could stay.