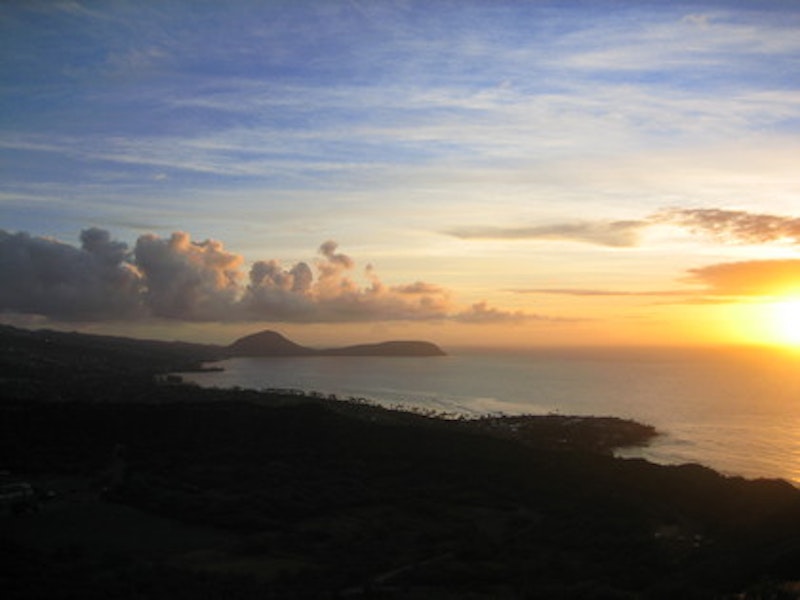 All photos by the author.

Honolulu comes to life early in the morning. By five a.m., when we started our four-mile trek to the base of Diamond Head Crater, the streets were active with runners and tourists. Surfers on their way to the beach carried long boards tucked under their arms. The streetlights cast a soft glow across the stony sidewalks and the banyan trees [http://www.andreaharner.com/banyan-tree-aerial-root.jpg] lining the road sat back in shadows like great looming monsters in the morning’s darkness. My husband and I planned to reach the crater’s summit by sunrise. At 6:58, the sun would separate from the ocean and start it’s ascent over the island of O’ahu. We were there to watch it happen.

Once a volcanic crater, Diamond Head has been inactive for roughly 150,000 years. It is now lush and green. Long grasses and full trees line the long slopes of the crater’s interior. Dizzying cliffs drop along the sides to the water and beaches below. The wind at the very top was stronger than we had expected. The view was more expansive than I could have imagined.

The crater is a sprawling 3520 feet in diameter, cut through the middle by a hiking trail. We started out on a concrete path that quickly turned to dirt and rock with the incline. We could tell where lava had once run, since the surface of the stone looked like flowing, rippling water, like waves coming over the sand, tide on the beach. Approaching the summit, the trail turns into a series of steep staircases, one with 99 steps that we foolishly took at a jogging pace. The stairs lead to darkened tunnels, which lead to more stairways, which lead through a former military command post to the summit, where a crumbling army observation deck is now a place for hikers to sit, survey the expansive valley below and await the sunrise.

There have been many times in my life when I was up before the sun—class, work, sporadic struggles with insomnia. All of those times, I’ve witnessed the shift from night to day as a gradual transference. Light slowly and at times imperceptibly begins to fill my apartment, illuminate the sidewalk, the road. The dark begins to slip away and the day replaces it, moving into the spaces that night so recently occupied.

Never before have I seen the sun rise, watched as it moved, not gradually at all, but suddenly and wholly into the sky. The water, over 760 ft. below, bounced and sparkled in the light. The crater’s vegetation glowed green, illuminated brightly by the sun. We looked out over the ocean, spotting the early morning surfers bobbing among the waves. We looked out over Waikiki and picked out our hotel in the distance. We looked out over the mountains to the northwest, in awe of the cloud formations and agreed that it was time to begin our descent. The day had started, the trail through Diamond Head is not shaded and from the moment it comes into the sky, the sun in Hawaii is hotter than any sun I’ve ever felt in my life.