The Splice Today Guide to Warhammer 40,000

Like blended Scotch, with more fighting and British slang. 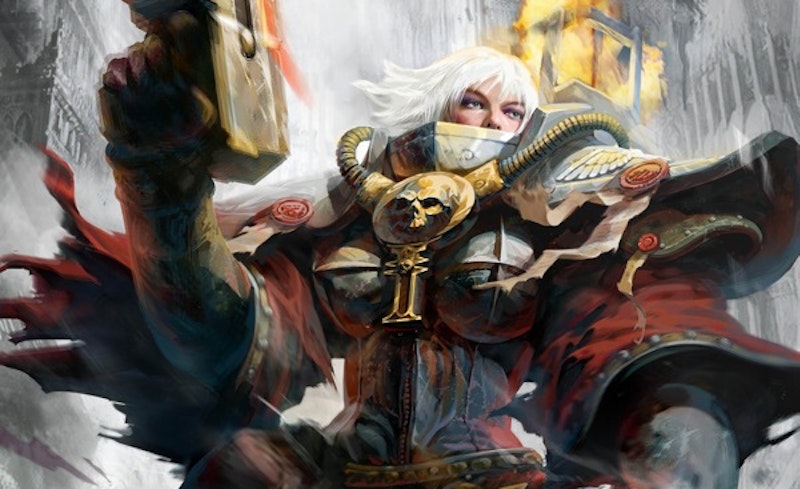 Scotch whisky, a noisome substance that people may train themselves to enjoy, comes in both blended and single malt forms. Single malt scotch derives from a single distillery and is redolent with the terroir of its production; thus peaty Laphroaig tastes of smoke and moss, and mild and tempered Balvenie tastes of slightly less smoke and moss. Blended Scotch takes a few notable single malts and uses them to flavor grain whisky, generating a drink that lacks the shocking character of its constituent single malts but makes up for it by being cheaper and less challenging.

I introduce this article with Scotch-talk not because I am interning for GQ but because the idea of a blended Scotch applies well to Warhammer 40,000, a diffuse intellectual property spanning unspeakably nerdy wargames, video games, and a huge library of novels. Warhammer 40,000 is catholic and syncretic in its "influences" (what some might term plagiarisms); it borrows from Frank Herbert's Dune (and in visual style from David Lynch's delightful film version), Star Wars, the peerless Jack Vance, Aliens, and a diverse and very extensive roster of science fiction and fantasy writers both hacky and respected. Like a blended Scotch it dispenses with the harshness and vibrancy of its source material, selecting and muting only the high points and rendering the whole into something that is first and foremost palatable.

I began reading Warhammer 40,000 novels when I was doing my dissertation fieldwork, an activity which required a lot of travel and caused stress. While waiting in a bland airport or on a cold train platform I wanted to read something, but I did not want to think-I wanted anesthesia or comfort food, not something difficult. Warhammer 40,000 answered these requirements-it was violent, brisk, aesthetically pleasant, and left almost no trace on the mind.

The Warhammer 40,000 novels take place in and around the year 40,000, a time when almost everything is grim and unpleasant and architecturally similar to 16th century Europe. Humankind is dominated by worship of the Emperor (shades of Dune and Star Wars already!), an ancient, superhuman warlord who ran into some unpleasantness several tens of thousands of years ago and has been “resting” in a giant golden life support throne ever since. This is one of the less ludicrous elements of the setting. Chapters of Space Marines serve the Emperor – the Space Marines are genetically engineered superhuman giants who flit hither and yon in enormous armored space suits, firing guns and killing aliens with chainsaws.

Ah, Space Marines! Like corporate consultants or members of athletic teams, they dedicate themselves ferociously and monomaniacally to their work, which is defending mankind from its many real and imaginary enemies. Many of the novels focus on the Space Marines, or their gothy counterparts the Chaos Marines, troubled Space Marines who betrayed the emperor and subsequently went to work for a pantheon of evil powers and discovered the joys of sexual depravity and growing tentacles all over their faces (again, not unlike management consultants-ZING!).

We also have the Inquisition, the Imperial secret police tasked with rooting out witchcraft, heresy, and xenophilia; many members of the Inquisition also have psychic powers, a welcome wrinkle of complication in this otherwise pedestrian fictional world. Some (actually all) of the best Warhammer 40,000 novels focus on the Inquisition.

Additionally there are space-elves, evil space-elves, space-orcs (spelled "Orks"), gross pulsating aliens, robot skeletons, and a bunch of other things that I have forgotten or do not wish to mention. You can perhaps see why I thought of blended Scotch. Not all of these elements appear in each book, and the whole actually comes together in such a way that its inherent silliness gives way to an almost sublime purity of vision.

Take, for instance, the issue of office equipment – in the hyperbolically grim and brutal world of Warhammer 40,000 things like faxes and copier machines are made out of lobotomized, partially robotic human beings. When you understand that a completely serious dramatic scene may at any moment feature a character frowning at a bejeweled computer screen set into the withered skull of one of these living corpses you will perhaps understand the appeal of the setting.

The Eisenhorn and Ravenor series (Dan Abnett)
Many different writers produce Warhammer 40,000 novels; Dan Abnett is the best of this group, and he generates consistently entertaining, cleanly written novels that are pleasing in the manner of summer blockbusters. His Eisenhorn trilogy follows an Inquisitor named Eisenhorn as he tracks space-criminals, fights aliens, suffers some spinal injuries, mopes, and decorates a series of apartments. Eisenhorn and his team are generally appealing, the villains are vile, and the locations are picturesque and memorable. The Ravenor series follows Eisenhorn's former trainee on rather similar adventures and is nearly as good as its predecessor. Both are fun and light in the manner of the original Star Wars movies.

The Inquisition War (Ian Watson)
I looked up this book (an omnibus collecting several related novels) on Amazon and found that it's out of print, and that used copies are going for at least $37; shocking! It's good, but not at that price. The Inquisition War follows another melancholy Inquisitor and his merry band as they track a galaxy-wide conspiracy to do something which may be pretty bad-I've read the book twice and still can't remember exactly what the villains planned, but don't hold this against Watson, who appears to have locked himself in a room containing the complete works of Jack Vance before penning this long, delightfully overwritten series. This is an early entry into the Warhammer 40,000 library and is not typical of contemporary works, in that it has the barest rudiments of a sense of humor.

Sandy Mitchell's Ciaphas Cain novels
An "homage" to George Fraser's Flashman series, these novels feature a comic verve which is, again, quite atypical for the Warhammer oeuvre. Cain is an Inquisitor but also a bounder and an incurable coward (unlike Flashman he is not a rapist); he nonetheless finds himself in a heroic role, foiling a series of ludicrous plots against the Empire. The first several books are good, the most recent ones are increasingly somnolent. Also note that you may encounter sex scenes, and that they will make you cringe with embarrassment.

Other passable books include Storm of Iron by Graham McNeill, a narrative that follows a group of Chaos Marines as they bitch at one another and compete for nicer tents during a protracted, pointless siege, and Dark Apostle by Anthony Reynolds, another Chaos Marine story memorable for its intense interest in workplace safety and process documentation among mutant slaves building an enormous, pointless tower. Daemon World by Ben Counter is also interesting although it barely qualifies as a Warhammer 40,000 novel since it focuses on an essentially medieval world ruled by an extremely unpleasant woman who worships Slaanesh, god of gross sex metaphors. The "Horus Heresy" series contains some extremely entertaining novels (the first two, as I recall) and some ghastly failures.

I once took a writing workshop with Joyce Carol Oates, who told us that people enjoy detective novels because the genre creates a comforting contract between writer and reader. With a detective novel you know that you'll get a crime, an investigation, and a coherent resolution. The same holds true for these Warhammer 40,000 novels, in which you are sure to get a ludicrous setup, a violent exposition, and a more or less satisfying end. They are as smooth as blended Scotch but contain far more brass-plated skulls, and should you choose to travel during this hot August I encourage you to bring one along with your antibacterial hand cleanser and your neck pillow; the novel, too, will ease your journey.