The Renaissance Man Out West

A new collection of Jaime de Angulo’s prose refocuses our attention on this unique chronicler of barely-settled California. 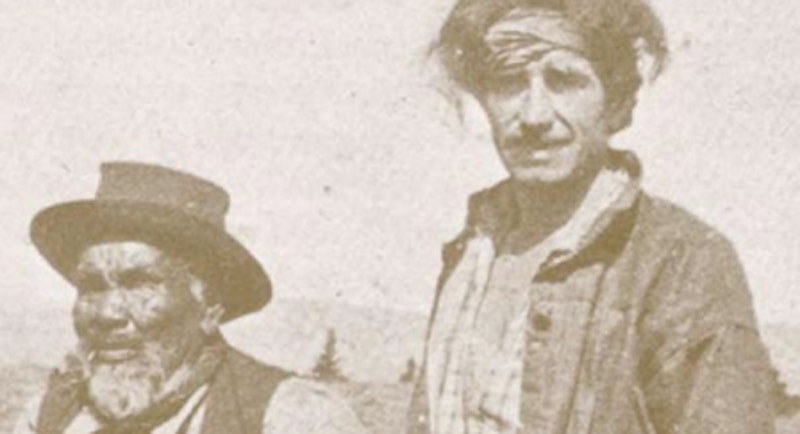 Born in France to Spanish parents, Jaime de Angulo came west, to California, as a young man, with the goal of becoming a cowboy. He was 18 in 1905, the year he decided to loosen the strictures of his Jesuit education and upper-class upbringing, and over the next two decades he would study medicine and anthropology, work as a California ranch hand, perform pioneering ethnographic studies of multiple Native American tribes, and earn praise from Ezra Pound, D.H. Lawrence, Marianne Moore, and William Carlos Williams for his fiction writing. Counterpoint Press’ new collection, The Lariat and Other Writings, out last month, puts a small sampling of de Angulo’s varied output back into print; it’s a good first step, but the time is undoubtedly right for a full-scale revival of the man’s work.

Thoughtfully edited and introduced by David M. Miller, The Lariat and Other Writings is the first such collection of de Angulo’s work to appear in decades, but it’s also notable for what it doesn’t contain. It’s hard to think of an interested reader who wouldn’t want more than the contents of this small book. It contains two autobiographical pieces, about de Angulo’s idiosyncratic father and his initial view of the Southern California coast; two nonfiction accounts of religious ritual among the Achumawi and Pit River tribes; two retellings of Native American myths; and the title novella, written in 1927, which is likely de Angulo’s greatest and most famous literary effort. All of the selections are fascinating in their own right, and Miller’s compilation does illustrate how de Angulo’s disparate interests and styles informed each other—“The Lariat” draws on travel writing and Native American religious myth, just as the autobiographies are written in a consciously expressive vernacular (“he thot that honesty wud be apparent”) befitting regional fiction.

A narrative does emerge from the piecemeal assemblage in The Lariat and Other Writings; it starts with “Don Gregorio,” de Angulo’s recollections of his father, whose bad French only exacerbated the man’s outsider sentiment as an immigrant. The sketches about his watch collection, his hatred of pockets (“He said they were illogical”), and his crusade to make the family chew their food “thoroly” recall the similarly entranced recollections in Bruno Schulz’s nearly simultaneous Street of Crocodiles, but it also reveals why he felt compelled to flee the comfort of sheltered continental life. As a boy, de Angulo takes a class field trip to central Paris, and sees the fountains:
Now, for a long time I had been wondering about the jets d’eau of the Place de la Concorde. What made the water go up? I used to wonder and wonder. I lay in bed at night imagining a complicated system of paddle wheels each one throwing some water up to the paddle above, and so on and so on. […]
Yet, I was angry, I thot to myself: “yes, at school you fill me up with stupid stories, with arguments about sin, about the state of grace, all sorts of things which bore me, things which I don’t understand (and which, I suspect, you do not understand either)! Meanwhile you let a miracle, a real miracle, go bye, and you do not tell me! a miracle which makes me dance with joy, the miracle of communicating vases, the miracle of water going up-hill! Either you have no imagination, or you are very stupid.”

It’s clear from this early experience that de Angulo, while mistrustful of Jesuit authority, wasn’t a firm agnostic; he objected to the Catholic focus on fictionalized miracles and simultaneous ignorance of naturally occurring ones, but he clearly valued the idea of miraculousness itself. Thus his eventual gravitation towards unsettled Western California (“What a scene! […] This is the place for a freedom loving anarchist. There will never be a road into this wilderness”) and more holistic Indian religion (where “spirit” “is like an unseen, untouched, unsmelled, unsensed world of electrical force […] and any time a certain action, a certain emotion may suddenly throw you into contact with it”) makes sense, nearly a precursor to later white generations’ interest in Buddhism and Hinduism. de Angulo believed deeply in the power and importance of personal religious experience, which informs the compassionate take on “primitive” tribes seen in his academic work.

It’s tempting but wrong to say that “The Lariat,” published in 1927 and then revised in 1943, brings all the man’s gifts together and constitutes a grand statement of purpose, although certainly de Angulo’s interests in religion, family, Western settlement, and culture do find expression in the novella. It’s more conscientiously poetic than even the autobiographical pieces, written in an impressionistic style that anticipates Faulkner’s “The Bear” and Cormac McCarthy’s Texas-set novels. “The Lariat” concerns a Spanish-run mission on the California coast, where Catholicism has slowly permeated the surrounding native community. This includes the natural surroundings, present in Greek chorus-style discussions throughout, watching as the men’s problems with each other and with the bear that threatens their cattle supply lead to unavoidable violence.

“The Lariat” is haunting and beautifully written, with a dreamlike final few pages that befit the mythical storytelling through. It stands on its own better than the various small pieces that come before it in Miller’s collection, but like those, it gains poignancy when appreciated as part of de Angulo’s wider effort to document a part of the world through a mixture of journalism, personal essay, folktale, scholarship, and music. In this way he precedes William T. Vollmann, whose ongoing literary project largely concerns native North Americans and the contemporary subcultures of Southwestern California. Vollmann shares de Angulo’s multifaceted approach and his unrelenting empathy for “primitives,” and he’s been similarly prolific over his 25-year career. The Lariat and Other Writings gave me just enough to want to know more; for now, we can only await the wider availability of Jaime de Angulo’s own influential work.