"I spent my first day at home doing my utmost not to rob the library." 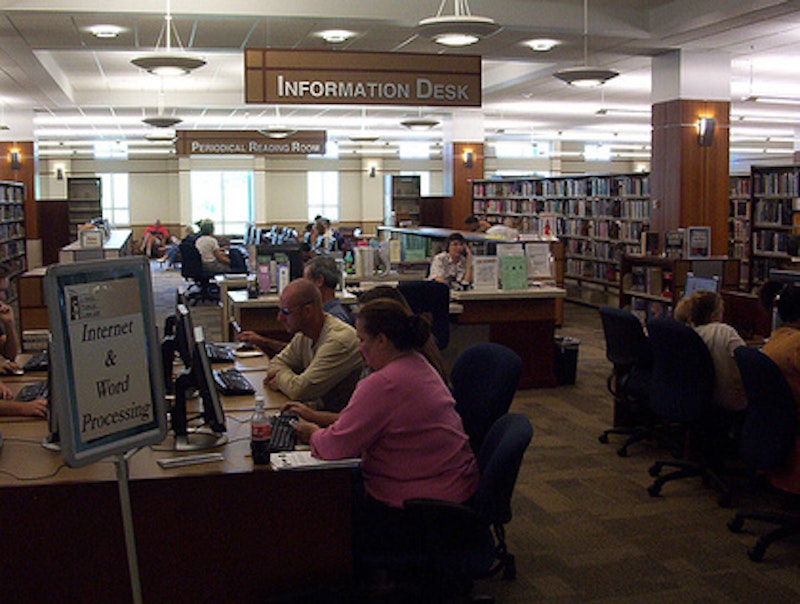 Miraculously it was still there: the monster bong I'd constructed when I was 15 after being inspired by one of the most underrated films of all time, Idle Hands. The bong was prominently displayed in the window of the police office in the township building, the centerpiece—the trophy—of a collection of confiscated paraphernalia. I'd come back to the house I grew up in for a week of vacation from teaching English in Japan and there was the bong, in plain sight, not only of the commuting public but my own bedroom window: our house was directly across the street from the township building. I spent my first night at home waking up every few hours to look out the window of my bedroom and marvel that after two years no other bong had displaced mine as the centerpiece of the law enforcement window display.

I spent my first day at home doing my utmost not to rob the library. It was next to the township building, and the library and I had never been on the best of terms. I'd plundered its shelves as a kid but only in the most innocent and law-abiding manner: it was the library that made me into the respectably literate viewer of Idle Hands that I became as a young teen. The problem with the library was that Muzak played constantly in the background. This was the doing of the archetypal suburban moms who ran the library from behind the Circ desk and who took their jobs so seriously that they would suspend your borrowing privileges for a month for a third-strike violation of speaking louder than the ambient blandness.

How were you supposed to learn to read kanji with incredibly distracting instrumental renditions of "Never Can Say Goodbye" or "Sara Smile" competing for your attention? For a year I had a running battle with the moms behind the desk, one that started as a polite protest (polite until it became an argument) and evolved into a full-fledged campaign that ended with me, at an age when I was just growing hair on my chin, being permitted to "make my case" before the moms' commander-in-chief, who happened to be the mother of a girl I had text-dumped back before I knew better. It didn't really end there. There was a special meaning in the way the politely smiling moms stamped due dates on the books I checked out while "You've Got a Friend" or "Morning Has Broken" brightened the mood of scholars doing their homework at the round desks nearby.

I was home only for a few days but I needed something to read, and when I walked the 50 yards to the library, I discovered some housecleaning had taken place. In the entranceway stood stacks of books piled nearly to the ceiling, each with the word "discard" branded savagely in red across the jumble of due dates on the white labels pasted across the back covers. I reunited with some old friends from my kanji-learning days, but what most amazed me were discarded first editions from the poetry section. There were first editions of John Ashbery's Houseboat Days and James Merrill's Braving the Elements and John Berryman's Dream Songs and George Starbuck's White Paper, along with other gems. My first impulse was to giggle. I had filed the library's Muzak torture under the category of horrors that were not possible to avenge, but here was the library obliviously compensating me for its injustice. My second impulse was to heap up as much of the compensation as I could and carry it the 50 yards back to my house, and then return with my 1900-square-inch North Face travel duffel. I figured that it would take only one or two trips to get complete payback for all the grief I'd undergone at the hands of the Stalinist moms.

But as I admired Mighty Joe Bong on my way home, it reminded me that I was a role model. Mighty Joe, by virtue of being displayed publicly as a prize catch, had inspired very bright adolescents—adolescents who might have been constructing miniature supercolliders if not for being repulsed from the library by "Sara Smile"—to fabricate paraphernalia that would outshine Mighty Joe. I knew this for a fact because I had sampled from some of these would-be claimants to the title of Mightiest. Actually, many did outshine my Mighty; unlike Joe, they had simply escaped confiscation. The township unwittingly was showing off an example that sold short the design ingenuity of its best and brightest youth.

So I turned back, because I realized that in my hands I carried landmarks of contemporary American poetry that might inspire some tweener to become the next Donald Hall or James Schuyler instead of Anton Tobias or Mick or Pnub (please tell me you have seen Idle Hands). And there I was again at the Circ desk, picking up where I'd left off, same soundtrack in the background, same battle of right and justice versus a smiling mom possessed by demons.

I argued that I could not in good conscience walk off with the library's own best and brightest. There must be some mistake; at the very least the library should be adding to its coffers by selling the first editions on eBay, that if there was room in the alcove to give away the snubbed verse, then why not put up a few shelves in the alcove to keep the collection intact? The Muzak-benumbed mom responded with the kind of reasoning that explains how the prodigy you sat next to in Honors English becomes the guy talking to himself while walking along the shoulder of the freeway, soon to be frisked by some State Trooper who was in the same graduating class. Her soul was hell-bound.

But I had done my civic duty and could now return to Kyoto with new material to make use of in my lesson plans. I looked forward to explicating the cultural references in "Daffy Duck in Hollywood." I looked forward to the librarian moms returning home to the borborygmic giants who would roll over on them in their sleep. I slept well that night.