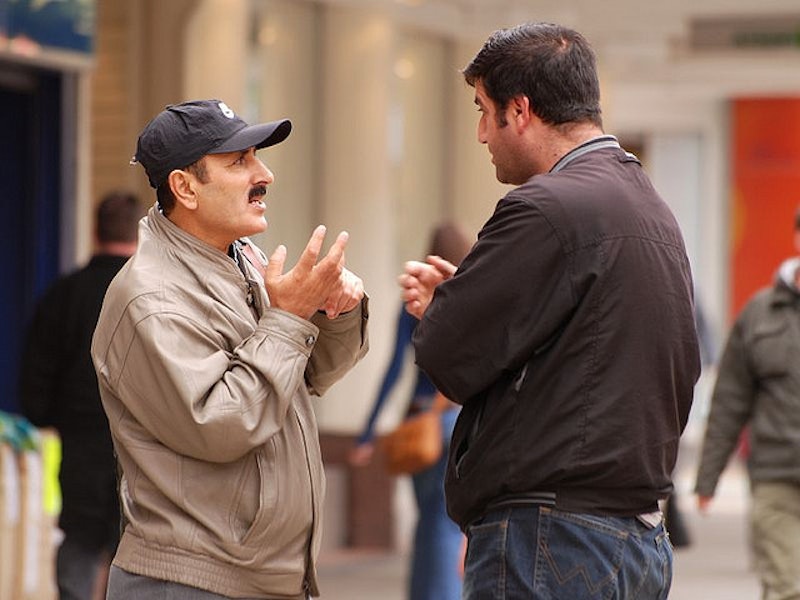 My friend Billy is a schlubby-looking fellow, and the first or second time we met he told me how people mysteriously felt free to browbeat him. I promised myself I wouldn’t, but eventually I broke that promise. As a result we entered a strained phase that lasted until this month. The trigger for our problems was this: Billy has his own way of talking, and it’s a lousy, inferior way that I deplore. Billy wants to show he has a vocabulary, so he keeps dragging in words that are too big for his grip.

Behind this problem lies another. I recognize that Billy is a smart man and has a very good ear. Not only can he do a dead-on improvisation in the voice of our local Jamaican pot dealer, he can explain how he picked out the words and reasoning he attributed to the dumb bastard. But Billy also has some sort of cognitive difficulty with language (or such is my diagnosis) and he suffers from anxiety about being graded. A long time ago he dropped out of college and resigned himself to delivery jobs and restaurant work. This was after a childhood of routinely being told to shut up. His burning goal now is to make clear that he can talk about stuff.

Unless you take charge, conversation with Billy becomes a trial. He’ll start reciting the Latin names for the parts of the face, or list the names of subway stops, or discourse on the fact that Grover Cleveland is counted twice among U.S. presidents, or claim (erroneously) that Aaron Burr was removed from office. He will interrupt you in order to do any of these things. Because he wants to show quickness of brain, he will also interrupt in order to sum up your point and get it wrong. He has the dogged greed of somebody who thinks that finally, for just this one moment, life will turn out the way it’s supposed to.

The vocabulary bothers me the most. You can see Billy’s face brighten when a big tuna of a word occurs to him. His chin lifts, he lunges toward his second of grandeur, and something is triggered inside me. This something, my reaction, is typical of the bullying directed at little brothers and other wannabes. The downtrodden are so desperate, so ready to be puffed up. Their ambition peeps out like a worm from the earth, and we see what a miserable thing it is to want to be high instead of low. Swatting down that pokey hubris feels like a blow for decency, a cost-free blow because there’s nothing little brother can do back to you.

I’d say this righteous swatting down was the crummier part of my contribution to our friendship’s hard times. I did get tired of being interrupted and droned at, and people ought to use words correctly. At any rate, I set Billy straight a few times regarding word use. One day he had enough. He jumped to his feet and stumbled out of the café, and for eight or nine months we didn’t have much to do with each other. But I ran into him last week, and then again a couple of evenings ago, and we managed a couple of conversations.

The first time Billy was talking about The King’s Speech, which he had just seen. “He was belligerent with her,” he said, meaning the Prince of Wales and Mrs. Simpson. Most people would say something like “He flaunted his relationship with her.” Still, Billy might be right. It depends on whether the Prince was simply sticking by his lover or using her to pick a fight with the powers-that-be.

But finding out what Billy had in mind would have meant a safari through misaligned verbal thickets. So instead I had some fun. I asked if the Prince of Wales’ belligerence with Mrs. Simpson took the form of beating her up. Or did he wave her at people in a menacing manner? Me (as a truculent Prince of Wales): “Just try me, I’ll give you a piece of dee-vor-say.” Then I adapted a bit from 30 Rock and put up my fists: “This one’s Wallis and this one’s Simpson!” The result was that our conversation ended pretty soon. The next time we talked I decided to take a hint from reality. Billy’s word habits are here to stay; either I accept them or I talk to somebody else, and accepting them means shutting up.

I stuck to that resolution. Billy described some slob baseball players he once saw at a bar: “They had no comportment.” I said nothing. Voice fierce, Billy said of the U.S. budget deficit “That’s a relatively big deficit.” He didn’t mean that the deficit could be considered big only when compared with a group of things that are small. He meant that even for a U.S. budget deficit, the present one is big. Nobody else has ever used “relatively” to mean “even for.” The relatively young Mikhail Gorbachev was called that not because 55 is young but because the last three men in his job were 73, 69, and 75. But I kept my mouth shut.

As much as he has any active ambition, Billy wants to be a songwriter. So we got onto the subject of songs and I made a joke about “I’ll Take Manhattan.” Billy jerked his head back as he parried. “Leonard Cohen doing a dirge,” he said. It turned out he had never heard of Rodgers and Hart; hence his belief that I was referencing the Cohen song about “First we take Manhattan, then we take Berlin.” Billy’s ignorance has surprising reach, and this provoked me. I kept my word-mockery cork in place (“dirge” is actually okay as he uses it here), but another popped out.

The café’s speakers were playing “Everybody Wants to Rule the World.” I told Billy that the song was a Lerner and Loewe number. They dropped it from Camelot in Philadelphia, and years later Tears for Fears dug up the song and covered it.

Billy wasn’t clear entirely clear about whom Lerner and Loewe were, so I asked him if he knew “I’ll Tumble for You.” He said that was Culture Club. “They covered it,” I told him. “The original was from the second act of My Fair Lady.” Billy said he’d heard of that show.

I tried for a streak. “‘Uptown,’” I said. “That’s another. You know, the song Prince covered.” But Billy had never heard of “Uptown.” My God! I tried “If I Were Your Girlfriend,” saying it was from Gigi. Billy whiffed again.

“Okay,” I said, “‘When Doves Cry.’” This time Billy nodded. “From the second half of Gigi,” I said. I told him it was the big character-motivation number for Louis Jourdan. “The thing to remember,” I said, winding up, “is that for early 80s British new-music acts, and also for Prince”—and at that point I lost it and started to laugh—“Lerner and Loewe represent a treasure trove of continuing musical …” But I couldn’t go on. Billy cracked up too, which shows his good nature.

“Well, yeah, I believed you,” he said when we were done. “You were so dogmatic.”