My Dream About an Ex-Boss 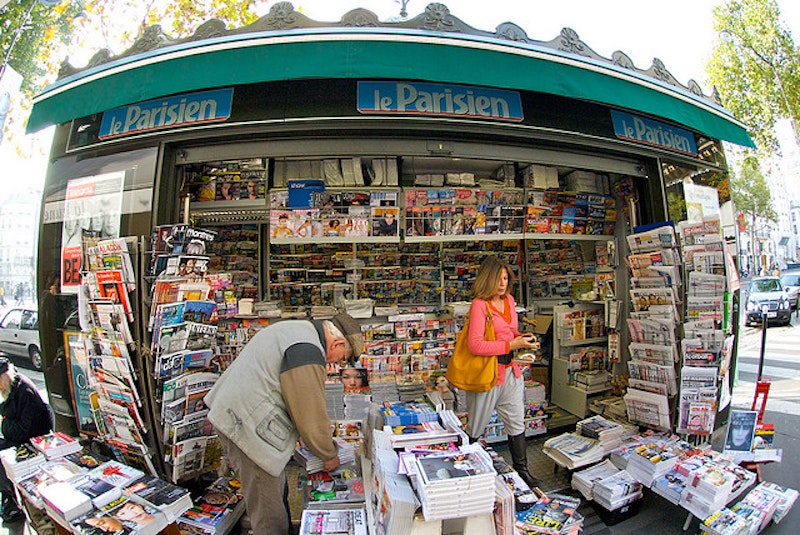 It’s the mystery of the empty hotel, the bed, the angry dark-haired girl, the man-child and his gizmo and the nonexistent indie film with the big ad in The New York Times.

I had a dream about Walt Billis last night. He was my boss a long time ago, when I was in my late 20s and he was in his early 30s. We worked at a newsstand magazine that was trying to make a splash, and he was a jerk. I’ll leave it at that for now.

In my dream I watched a movie he had directed, an indie romance about cute neurotics living in New York. I think a weekend trip was involved, a getaway by two black-haired neurotic kids—by “kids,” I mean late 20s, early 30s, I guess. The seaside hotel had big, blank, empty rooms, just carpeting and then furniture off by a wall, in the distance; that was the low budget. The main point was the dialogue, as it is in these sorts of films. Watching it I had to say, Okay, Walt did it. Everyone in the office has his or her project that would prove his or her peculiar worth, if only we were the sorts of people to carry through projects. Walt had done his. It was a success: the ad in the Times culture section was big and included a quote from the Times critic and countless other critics.

I reflected that movies like this didn’t make so much money. The Tao of Steve, all those years ago, had made four million. Of course, Walt had made a few films by now; that was stipulated in the dream. He had a career, one he had made for himself at age—what? Because when I knew him he’d been 34, eight years older than me. So now he was almost 60—he had made his career in his 50s. Which meant I was just entering the time when I could make my career.

After all, the last I’d heard of Walt he’d been a freelance copy editor living in Canada. This point, like his age, is fact and not dream. That’s why the two points crossed my mind. I was waking up, and doing so in the way you do when you don’t like a dream: throw out a mental hand, another mental hand, and let them land on something solid, on facts that let you know where you are. Walt was almost 60 now. The last I’d heard of him had been years and years ago. There was nothing in his situation then to indicate he was a success; I had learned nothing since to change that fact. There hadn’t been any ad in the Times with a lot of quotes.

One bit from the dream stands out, a peak moment. It came near the end. When a dream agitates me it reaches a point where it really kicks into gear, where my heart starts racing and the dream gets more menacing, nosier about my personal problems. At this point, I believe, I become aware of myself in the dream. The events aren’t just taking place, I’m there watching them.

In this case I was screening the film, and within seconds this act became identical with leaning forward to advise the characters. The dark-haired girl and dark-haired boy were slumped side by side, possibly against one of the blank walls of the hotel, possibly against the headboard of a large bed, the sheets rumpled somewhere near their bare shoulders. The girl was complaining and the boy was tuned out, his eyes on some black gizmo he had in his hands. He wasn’t necessarily playing with it, more like he was engaged in some absorbing work that resembled play—which is how I imagine computer programming to be. I suppose his activity with the black gizmo stood in for the mysterious geek mental activity that powers the modern world.

My dream presented me with a big thought: the boy represented the modern male tendency toward involution, this way we have of separating ourselves from the immediate to concentrate on abstract matters that, as it has turned out, are highly powerful when it comes to affecting the immediate. The wonderful practical results have encouraged us to develop and indulge this tendency.

So here’s the boy in full throes, and the girl is alone and angry. By this point the boy is Walt Billis.

I lean in and prepare to give some good and forceful advice about breaking out of his head and paying attention to the girl. But, at the same time, I’m also wrapping up the dream, going through the process described above of laying hold of a few boulderlike facts that could press it out of existence. Maybe the two processes are tied up: I get the courage to speak out as I get the upper hand over the dream’s claim to plausibility. Of course the upshot is that the situation gets whisked away from me just as I’m about to get people to listen. But such is life, as I experience it.

The dark-haired girl, by the time we got to this scene, had changed from a glasses-wearing, squeaky girl like Alvie Singer’s intellectual wife in Annie Hall to a glamorous, long-faced, high-cheekboned girl rather like Bianca, the beautiful Bulgarian girl who sometimes works the front desk at the gym where I go. We’d been pals for a couple of months, by which I mean I would stop to talk with her for 10 minutes or so and she seemed glad to have me do it, but no longer. The week before my feelings had been hurt because she didn’t seem interested in having me stick around to talk, and I was still feeling raw.

Maybe she got into my dream because I’d rather think about beautiful girls if I can. Or maybe she stood in for some element in my life. She and Walt and the bed and the movie represented an equation that added up to an observation about my life, its fundamentals—presumably how they’d gone wrong.

Walt himself, the original article, had been above all an asshole, but one with a particular weakness: he understood technical details without understanding the why of anything, and he had no idea that he had this weakness. When I knew him, he’d made the jump from copy editor to senior editor, meaning that he no longer messed with syntax and punctuation and instead commissioned articles. But syntax and punctuation were all he understood. He could write a snazzy, well-balanced sentence, but he couldn’t tell if a sentence or an article contained anything worth knowing. He quit, angry and heartbroken, about half a year after he hired me. He took a job at Consumer Reports, failed to show up for it, then took a job at the number-two golf magazine. And eventually he made the jump back to copy editor and wound up in Ontario.

So there we have the line-up: angry girl who feels neglected, self-absorbed man-child who’s crawled into his sealed-off mental activity, bed, empty hotel, successful movie, a career late in life. It all means something to me. But what does it add up to?