Exploring a rarity of New York City, the corridor park. 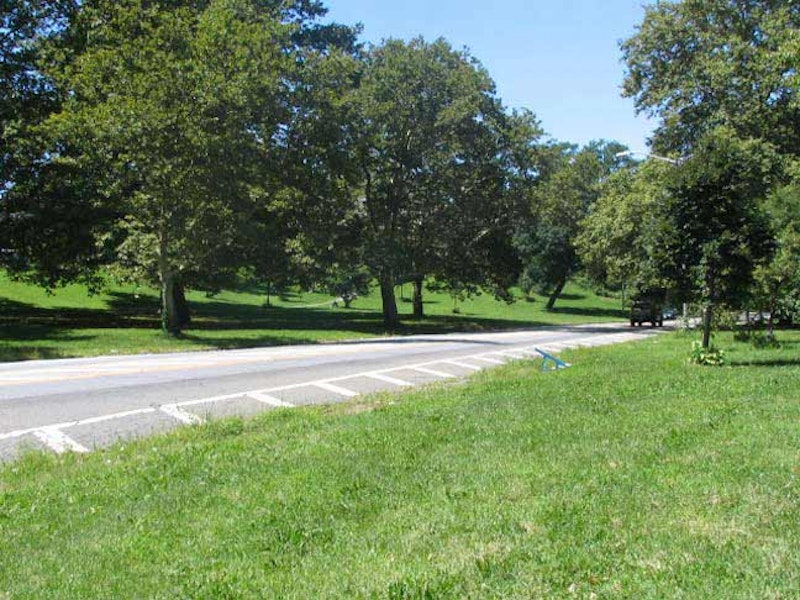 Corridor parks, long, narrow strips of green that go on for block after block between two streets, are relatively rare in NYC. The Bronx has two lengthy ones on either side of Mosholu and Pelham Parkways, Kissena Corridor Park in Flushing and Fresh Meadows, and perhaps even Eastern and Ocean Parkways in Brooklyn can come under consideration.

Bay Ridge’s Leif Ericson Park can also be called a corridor park, running between Ridge Blvd. and Fort Hamilton Parkway in fits and starts, mostly between 66th and 67th Sts. It was once part of an effort to bring an Ocean Parkway-type combination of carriage road and park to southeast Brooklyn. Today, Ocean Parkway is a motorized speedway with synchronized stoplights connecting the Prospect Expressway with Coney Island: but it was once rural. The same idea was conceived for Fort Hamilton Parkway and the Leif Ericson Park corridor; autos won out on the former, but the latter remains a park. 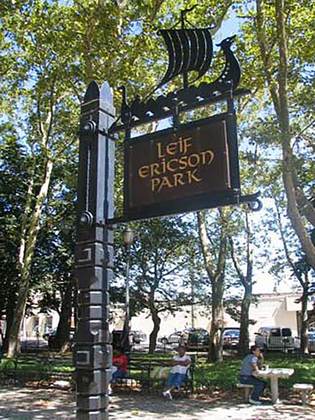 The eastern end of the Leif Ericson corridor is at Fort Hamilton Parkway between 66th and 67th. In 1997 the NYC Parks Department outdid itself in the sign department, erecting several gorgeous indicators with a Norse-Vikings theme.

Leif Ericson (c.960-c.1020), (for whom the park corridor as well as the section of the Belt Parkway in Bay Ridge is named), was probably the first European to set foot on the American continent, nearly 500 years before Christopher Columbus’ voyages. Ericson was born in Iceland around 960, the son of Eric the Red, an Icelandic king who discovered and colonized Greenland. The Icelandic Sagas offer two explanations of Ericson’s famous voyage. One suggests that Ericson, en route to Greenland, was blown off course and arrived on the northeastern coast of America. In the other, he organized an expedition to confirm a previous report of hilly, heavily forested land west of Greenland.

Scandinavians first moved to Bay Ridge and Sunset Park in the 1820s, and by the early- and mid-1900s made up a nearly majority population in the neighborhoods. When NYC bought a parcel of properties between 4th Ave. and Fort Hamilton Parkway in the 1930s, Robert Moses developed them as a unified park and it was named Leif Ericson Square. The Norwegian Day Parade is still held on 5th Ave. in May, though the Scandinavian population here has diminished since the 1960s. 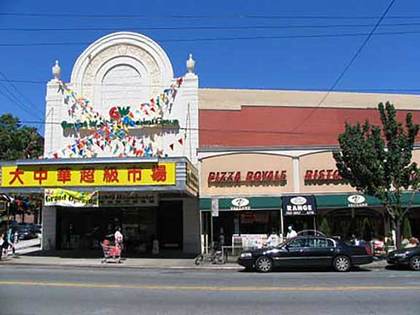 Opened in 1928, the former Fortway Theatre (2300 seats) a block away from the park on 6720 Fort Hamilton Parkway, had a beautiful atmospheric interior. Electric stars used to twinkle on the dark blue ceiling and had a Kilgen theater organ. There was a small stage in front of the proscenium. The theater was divided into a multiplex in the 1970s, but was closed by Loews Cineplex in June of 2005.

When I lived in Bay Ridge as a youth, you had your pick of four movie theaters (the Fortway, the Dyker (86th St. and Gelston), the Harbor (4th Ave. and 93rd St.) and the Alpine (5th Ave. and Bay Ridge Ave.) and before I came along, there were more. Of these, only the Alpine remains. The building next door is formerly a 10-lane bowling alley. Like many theaters, the Fortway doubled as a concert venue; Chuck Berry appeared here in 1972 touring behind his only #1 hit: “My Ding-A-Ling.” My last flick here? Young Sherlock Holmes in 1986. 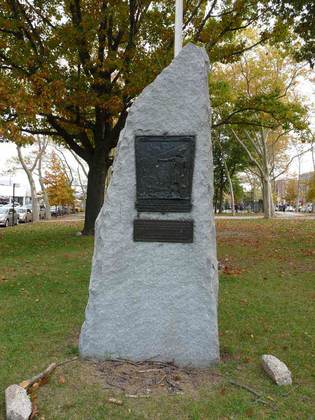 Crown Prince Olav, who ruled as the popular Olav V of Norway from 1957-1991, dedicated this replica of a Viking rune stone in Tune, Norway on a 1939 visit. The stone stands on Leif Ericson Square just east of 4th Ave.. (Tune, southeast of Oslo near the Swedish border, was incorporated into the town of Sarpsborg in 1992.) Rune stones were monuments to the dead erected in northern European lands dominated by the Danes and Vikings beginning in the 4th century and continuing into the 12th century. They were inscribed with words in the Runic alphabet during this time.

The brass plaque depicts Leif Ericson (a spelling variant, Leiv Eriksson, is used here; the explorer spelled his name in runic characters) with spear and shield, standing before a Viking longboat. The longboats were used on trade and exploratory missions, and one led by Ericson landed in Newfoundland in northeast Canada in 1000, give or take a few years. The explorers arriving there called Newfoundland “Vinland” as they found grapevines there—the climate may have been milder in Canada in that era.

The image of the fierce Viking warrior with horns on his helmet is largely false. Historic images show them with helmets, but they generally came with nosepieces and some eye and mouth protection, but not horns and no wings, as Leif’s image is modeling on the plaque. 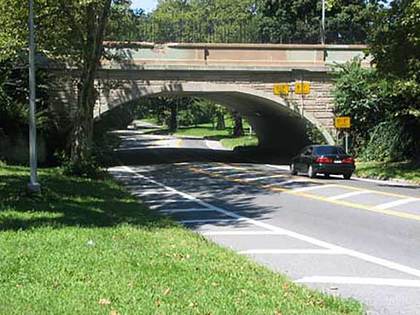 Awkwardly-named Shore Road Dr. is the original northern end of Shore Rd., which now runs from 68th St. southwest along the Narrows to 4th Ave. Like the rest of Shore Rd., it was built as a pastoral carriage road for leisurely shore-side traffic, and gently curves and twists from 4th Ave. and Leif Ericson Square to the junction with the Belt Parkway, built here in 1940. A pair of picturesque stone arches carry 3rd Ave. and Ridge Blvd. over Shore Road Dr. These aren’t the originals, though; they were replaced a few years ago in a park-wide renovation. 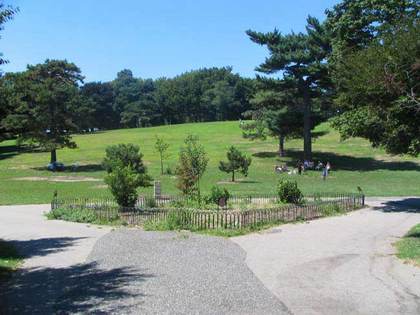 Owls Head Park stretches between the Belt Parkway, Colonial Rd. and 68th St., and its high hill provides a prime viewing spot during Brooklyn’s occasional tall ship parades. The park was created from the estate of Eliphalet Bliss (1836-1903). In 1867 he founded the machine shops that became the E. W. Bliss Company and the United States Projectile Company, concerns which at his death employed 1300 men.

Bliss’ interests developed along two lines: the manufacture of tools, presses, and dies for use in sheet metal work, and the manufacture of shells and projectiles. His estate, Owls Head, possibly named because the promontory on which it was located resembled an owl’s head, featured an observatory known as the Bayard Tower. Bliss purchased the estate from US State Senator, US Representative and Mayor of Brooklyn, and Brooklyn Eagle founder Henry Cruse Murphy (1810-1882) mentioned above. Bliss willed the estate to NYC provided it be used for parkland. The park, still known by old-timers as Bliss Park, has been in use by local residents since the 1920s; Robert Moses redesigned it in the 1930s. The mansion and tower were razed in 1940. Senator St. is named for Murphy, while nearby Bliss Terrace was named for the industrialist.

In the 1920s, the BMT started construction on a new subway branch that would connect the 4th Ave. subway to Staten Island. Parts of the tunnel made it as far as underneath Owls Head Park, and the subway shafts are rumored to be visible somewhere within the park. The project was aborted by the mid-1920s.

This week marks the seventh anniversary of my first appearance in Splice Today. I’d like to thank the Smiths (Russ and Nicky) for the opportunity. In the 1990s, I marveled at columns in New York Press by Paul Lukas on weird product packaging, Todd Seavey’s on politics, and Dawn Eden, now a Doctor of Theology, on music. They became friends and, as well as other columnists, inspired me to write about what I wanted to write about: forgotten aspects of New York City. It all led to a quarter century of web postings, two books (so far), and this weekly column.