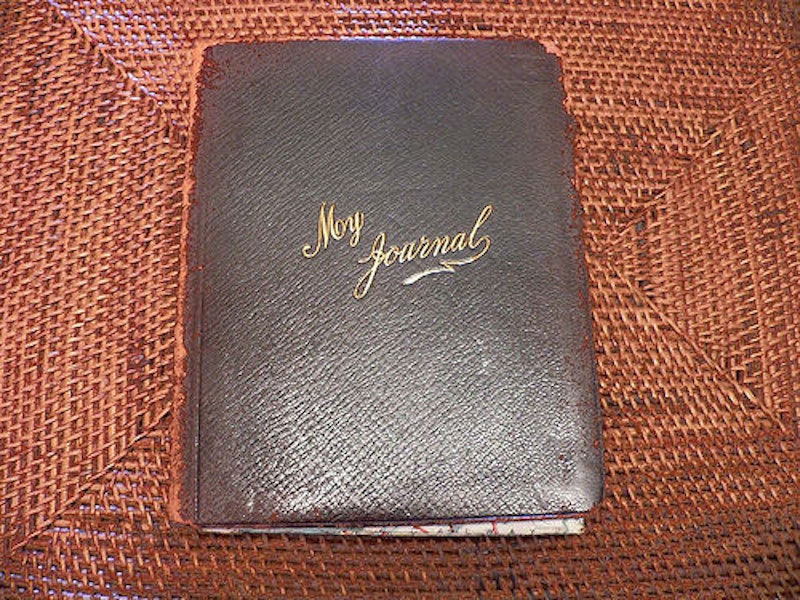 The first volume of Susan Sontag’s diaries, Reborn, was published recently to much controversy. Posthumous publication of an author’s journal is by no means unusual, but unlike Da Vinci, George Sand, or F. Scott Fitzgerald, whose notebooks appeared publicly long after their deaths, Sontag died only a few years ago, and is still actively remembered by surviving friends and acquaintances, which is the source of some of contentiousness.

The August 2008 publication of Kafka’s pornography collection excited its own swell of arguments within the academy. Some Kafka scholars wanted the volume suppressed. However, James Hawes, the editor of Excavating Kafka, claims that the pornography, which Kafka kept hidden in a locked drawer in his parents’ house, is essential to understanding the author’s work.

All this raises the question: What should be done with my own papers? I’ve been keeping my own journal since I was nine. Besides regular diary entries describing my daily activities—exhausting swim team practices, ballet and saxophone lessons, breathless run-ins with crushes, running for student government on a promise to lift the embargo on Cuba—it’s filled with poems, sketches, premises for novels, and aphorisms, etc. I began writing the journal expressly with the idea that it be published after my death, but with the publishing industry what it is today, I am fearful. Will all my faithful years of writing this chronicle come to nothing in the end?

To publish a book today, you really need to sell hard. Which is why I’ve decided to publish some excerpts from my journal now, while I’m still alive. By leaking a few pages, I’m hoping to build up some buzz for when I’m dead. Some publishers like the author to coordinate the launch of their book with a personal blog or a YouTube video—anything to excite the public’s interest. Thus, I am arranging for a sex tape to be posthumously released. When the time comes, my publisher can market them together: “The Notebooks of Iris Smyles… and this free DVD of never before seen footage of her taking it in the New York Public Library.” I’m going to film it in the stacks up against the books of my favorite dead authors as a way of suggesting my rightful place in the canon.

In the mean time, here are a few early excerpts from The Annotated Notebooks of Iris Smyles.

[From 1996 to 2000 the author discovered poetry and began practicing it herself. The influence of Mallarme, Byron, Keats, and Celan is everywhere evident.]

2/19/1997
Swallow and Spit
In and out my mouth he goes,
so I breathe through my nose.
With his hands atop my head
is how he draws me toward the bed.
As I kneel upon the ground,
I make a slight humming sound,
at which point he starts to shout
“Do it baby, in and out!”
Then I use my stealthy hands
up and down his sacred lands,
and as I grow quick in speed,
soon I know, he’ll come indeed.
Now upon my tongue address,
he begins, “I’m coming, yes!”
On my knees my thoughts thus follow:
Shall I spit or shall I swallow?

6/21/2000
My Ideal Man
If I were to write a poem
For and about my ideal man
He would give it back to me
With a list of corrections.

Maybe a good idea for a televisions series… Immaculate Sex and the City: “Mary is a single thirty-something virgin living alone and working in Manhattan. Viewers will watch as she and her three virginal friends navigate the treacherous urban dating scene, etc.  When she immaculately contracts herpes, no one believes that it is God’s herpes, and she suffers many trials. Work out specifics later…

[Further musings and some early attempts at a novel]
3/17/2001
Is there any actual difference between muffin and cake? It seems like a muffin is just cake eaten in the morning…

11/12/2002
To do: Must finish novelization of Weekend at Bernie’s 2. Play around with the P.O.V.
“As the weekend ended and the sun came up over Bernie’s decomposing body, his face looked ashen, yet there was still something in his sunglasses that suggested life. I looked out to sea and put my arm around Bernie. There are more adventures in store for us yet, I thought.”


[The following notes were found among papers dating from 2004 to 2009 but had no specific dates affixed to them.]

Recipe for Steak Waffles:
Grind up steak in blender, pour into waffle iron, serve while hot.

Idea for a dessert:
A gigantic ice cream Sunday called “The Hyperbole.” Pronounce it “ The Hyper-Bowl.”

Business idea:
Stuffed Plants
Create and sell Stuffed Fichus for children who feel they are not ready for the responsibility of caring for a stuffed animal.

Invention:
Butt-fur coat!
In bed with Glen the other day, I grabbed a handful of wolf like hair on his behind as he thrust into me. Got me thinking… If mink coats are expensive because minks are so tiny that it requires so many to make a whole coat, imagine the price one could fetch for a coat made of men’s ass hair. Could harvest the ass hair and call it “butt fur.” Especially since so many men are removing body hair these days, I could get a very good price for the unwanted curls. Ad slogan: “Because there’s nothing like the feel of a man’s hairy ass all over your body.”

Invention:
Tube and Funnel for women!
Tired of long lines for the ladies room? With Tube and funnel for women, you too can piss like a man. Just unzip, point, and start pissing! *Contact Camille Paglia about going in halvsies with me.

Try to popularize saying: I smoke like a fish that smokes a lot.

Introduce upside down question mark from Spanish to English and use at the end of sentences to connote irony.

Bring maxi pads back in style, the way I did leg warmers.

Idea for a board game:
“The Game of Death!” Combine elements of The Game of Life and Monopoly yielding a new board game of  “far out funereal fun!” Compete against other players who are also trying to build their legacy, get their affairs in order before it’s too late, and prepare for eternal sleep. Challenges include making out a will for surviving players! Outsmarting the government of its inheritance tax! Setting aside money for funeral arrangements! A special “writers edition” of the game will include the challenge, “Selling your papers to a University library! Sontag is at UCLA. Robert Frost is at NYU. Is Harvard’s library in the cards for you or will it be a shelf near the men’s room at Nassau Community?”
Pick a card: “There are a few coveted plots available at Pere Lachaise. Roll the dice to see if you will spend eternity there next to Colette, or be buried in unconsecrated ground like those French actors of the 15th century who refused to renounce their profession before death, or just get piled into a mass grave in Hart’s Island or some other Potter’s Field like poor Dawn Powell whose executrix refused to reclaim her remains.

Writing in my journal is sometimes exhausting—I’m 28 years old and have labored over these accounts for nearly 20 years. Often, I am tempted to lay down my pen, but then I remember my mission: I must persevere for the sake of posterity. Sometimes I wonder what I might have already accomplished had I put a fraction of the same care and consideration into my life, as I have into my plans for literary immortality. Other times my thoughts are given to crafting the perfect epitaph.

Rodney Dangerfield’s tombstone reads, “There goes the neighborhood.” Above the grave of physicist Werner Heisenberg it says, “He lies here, somewhere.” And Charles Bukowski’s epitaph reads “Don’t Try,” which is pretty lousy advice to give to succeeding generations, I think.

“Hope I didn’t leave the stove on….” is an idea. But then, I don’t want the summary of my life, my final words to amount only to a cheap joke. Most of what seems clever and witty in the moment expires shortly after the chuckle, making many remarks unsuitable for writing on a cemetery headboard.

I could use just my name, with an exclamation point after it. “Iris!” So that I might be remembered in death as many regard me in life, which is to say, with a degree of panic. “Nice Weather We’re Having,” might look nice engraved conservatively into marble, so that when people come across my tombstone on the way to their own family member’s, they don’t think me aloof. I don’t want to be remembered as rude. Then again, ambiguity is the source of great poetry. A simple line like, “Fine, How Are You?” etched tastefully into a slab of granite might say it all and much better.

Or perhaps a word or two a bit more formal, something sober and dignified, intimating my destiny.