Paul Maliszewski's new book focuses on frauds and the sensationalist society that loves them. 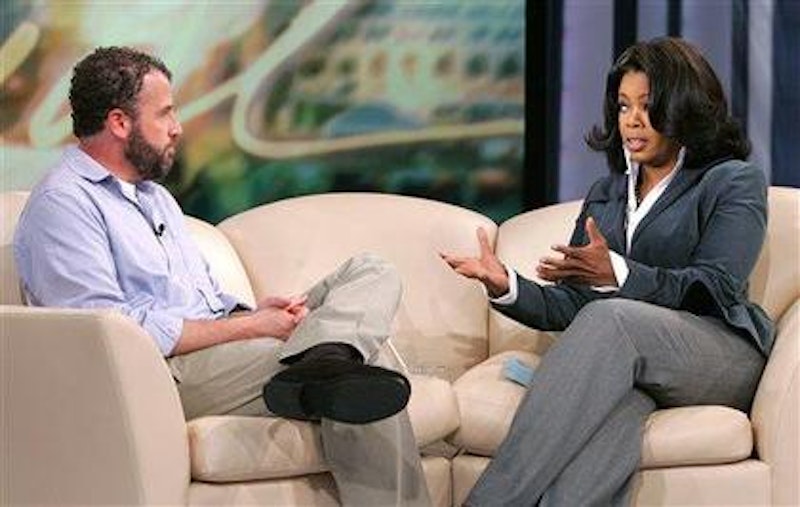 James Frey getting his ass handed to him on Oprah.

Paul Maliszewski begins Fakers: Hoaxers, Con Artists, Counterfeiters, and Other Great Pretenders, his collection of essays on frauds and cons (i.e., Stephen Glass and James Frey), with a long, defensive confessional chapter in which he outlines, in exacting detail, the various fake editorials and articles that he passed off on the Business Journal of Central New York, a publication which, in Maliszewski’s reckoning, had neither editorial merit nor a staff with an ability to discern fact from increasingly clumsy and frantic fiction. Maliszewski wrote for the Business Journal for a while and found his routine duties so numbing and the politics of the staff so repulsive that he amused himself by inventing a cast of shrill and bitter conservatives who applauded the Journal’s conservative, pro-business slant so enthusiastically and with such hyperbolic clarity of vision that they made it seem ridiculous; this chapter provides Maliszewski’s bona fides as a faker and gives him a chance to suggest obliquely that he was doing much the same thing as Jonathan Swift did in "A Modest Proposal" when he submitted overwritten, cutesy adaptations of CIA torture manuals thinly dressed up as management philosophy.

By the end of the boring first chapter, I was prepared to scorn Maliszewski’s slim, beautifully designed book for fraud. Maliszewski writes elegantly, with verve and economy and a sure sense of language, but his introduction suffers from a lack of vision and a preponderance of navel-gazing. The rest of the book felicitously reverses this false start, abandoning the author’s own frankly uninteresting frauds and moving on to some very interesting and serious consideration of the recent history of large-scale fraud in the United States. He focuses on a series of interconnected questions. Why do people perpetrate frauds? More importantly, why do people buy them, and what do they say about the supposedly non-fraudulent products with which they share the attention of American consumers?

“We many, we voyeuristic many, we want the real, and indeed we hunger for it, but we also want our real stuff to come in readily consumable packages,” he writes in his second essay, a rambling piece that begins with some detective work on an email hoax involving a homicidal bear in Alaska. Maliszewski early on shelves the question of why people fake—Stephen Glass, James Frey, and JT Leroy (a.k.a Laura Albert) wrote their fictions basically for mercenary reasons, to make money and to build their reputations. Maliszewski muses that writing under a pseudonym can be an “oddly, and surprisingly, liberating,” exercise in trying on a new identity, but he basically lets us rest on the assumption that the literary and journalistic fakers on which he bases the first few essays perpetrated their frauds for reasons that are at best uninteresting and at worst unfathomable. What is more interesting is: Why did people snap up these frauds with such joy?

Through myriad examples Maliszewski shows that most fakers tell their readers exactly what they want to hear. Leroy’s fictional memoirs of growing up as a drug addicted boy-prostitute provided an irresistible mixture of treacly sentimentality, taboo sex, depredation, and redemption that Maliszewski traces to the self-help literature of the late 1960s. Leroy provides a tidy, forgettable narrative which lets the reader glimpse into a gross and forbidden world, find it exactly as he would have expected, and then move on. In a long savaging of Glass, Maliszewski shows that Glass’ celebrated, false articles gave a frantic burlesque of the values that his editors obviously held:

Glass’s talent lay less in the originality of his imagination than in his solicitous ability to seize on whatever the conventionally wise were chatting about at cocktail parties and repackage it in bright new containers, selling the palaver right back to them.

Maliszewski asks if an article on the fact that people in the finance industry treat Alan Greenspan as a living god would have ever made it past the editorial desk—it wouldn’t. But Glass’ article on a financial analyst who literally worshipped an image of Greenspan made it into print; the same goes for Glass’ invention of a pimply-faced hacker, a bald use of a stock cliché that Slate’s Jack Shafer praises, inexplicably, for its imaginative power. Maliszewski lets neither Glass nor Shafer get away with this tepid and dull pandering; this chapter (“A Story Born Every Minute”) is dazzling, brief and insightful.

Maliszewski brings up the fact that art critics actually study forgeries, they keep them around and even arrange shows of them so that they can better understand how to protect themselves from future con men. He also shows how art historians can detect forgeries by looking for traces of anachronistic popular tastes in them—the forgeries most often conform to the obvious standards of the time they are made, rather than the putative time of the works which they imitate. He mentions, for instance, the story of a fake Matisse sketch that, while good enough to be purchased by the Fogg Museum, bore a striking resemblance to 1950s era department store ads.

Fakers questions why the extraordinary public reaction to Glass, and Jayson Blair, and other journalistic imposters didn’t go as far as the art world’s reincorporation of fraudulent pieces. Journalistic commentators expressed indignation and horror but ultimately they classed Blair and Glass as non-journalists, people who were fundamentally different from the rest of the newspaper and magazine set and who through their singular barbarity and willingness to lie made the rest of the journalistic establishment’s reliance on truth all the more noble. The fundamental assumptions of journalism remained beyond question.

Maliszewski’s insight is that journalism, and the memoir, confine their stories to a few acceptable forms, and as long as one is canny and shrewd enough to discern these forms one can pass off the most egregious fantasy as legitimate. The fakers, though they may have done harm, revealed a fundamental lack of imagination in the ostensibly creative fields in which they played. After its first chapter Fakers provokes real thought and tells some entertaining stories suitable for cocktail-party repetition. Maliszewski writes with grace, intelligence and playfulness; the book is thoroughly worthwhile.