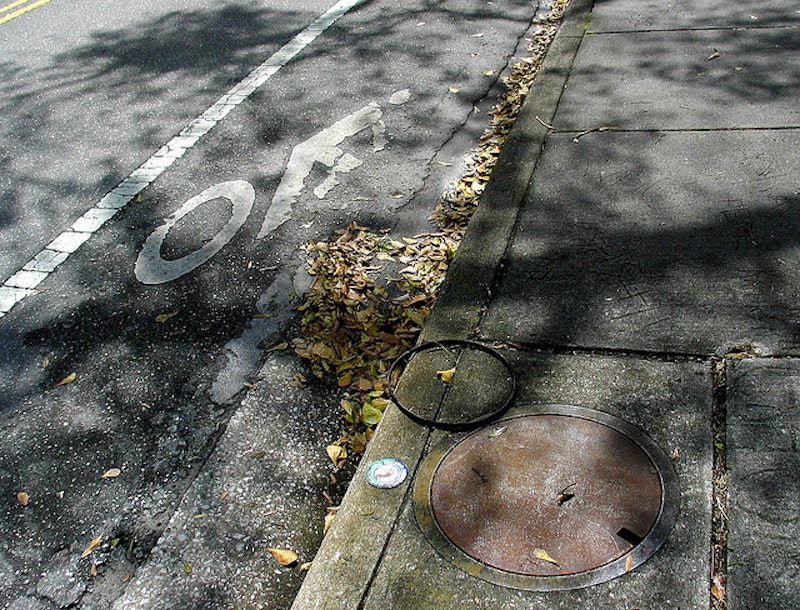 Down the hills from Iowa City, across the river and parallel to its course they drive, skirting fields and cowsheds, their cars shining, then dull, then soiled with immemorial dust that blows through the ranks of corn. On their roofs perch bicycles, stooped over on their forks, their front wheels hidden inside the cab; they lean like raptors or like sprinters at the starting block, crouched in a promise of explosive motion, their frames as thin and strong as their riders’ limbs.

I arrive in a Volkswagen, my bike dangling off the back in what I have just learned is a distinctly un-pro manner; for breakfast I ate a cold Arby’s roast beef sandwich, purchased the day before and stored in my refrigerator, next to some aging Swiss cheese and beneath a half-empty case of Pabst bought the year before. It’s the Chris Lillig Memorial Cup, held at a Mennonite church in Kalona, Iowa, and I am about to pit myself against what I imagine to be gentle, corn-fed Iowan families on modest bicycles bought at Sears, but what actually turns out to be indefatigable 20-year-old ur-athletes on Italian superbikes. Welcome to the Hell of Middle Iowa, Samsky.

I’ve registered for the category five-time trial; category five is the lowest ranking in USA Cycling’s scheme. In a time trial competitors are released at 30-second intervals, like captive birds, and they never form a peloton, a bolus of riders packed close enough to read the washing instructions on one another’s tights. A search of cycling websites recommended the time trial as an ideal entry race, since you don’t have to worry about joining the peloton, sneezing, falling over, and destroying several hundred thousands of dollars of precision sporting equipment. This advice was sound.

An email exchange with the race organizer led me to believe that the course would evoke the fragile beauty of Marie Antoinette’s pastoral fantasies—he promised 13 miles of “rolling hills,” which seemed almost insulting to a cyclist of my abilities. Thirteen miles? This is supposed to challenge a rouleur who completes a 17-mile ride every day before lunch? A cyclist who cut his teeth on the mountains of New Hampshire? A cyclist so talented and diligent that he has completed his daily 17-mile ride on at least five separate occasions during the previous three months, which, let’s face it, were kind of chilly and damp?

I drove down the day before the race to test the route. As I unpacked my bicycle I nodded to a Mennonite woman who had parked next to me in a minivan. We contemplated one another: she wore the self-consciously quaint 19th century farm clothes of her sect; I wore skin-tight cycling knickers and silver shoes. We nodded.

The course, the “rolling hills,” proved to be a hellish terrain of near-vertical climbs and dizzying downhill descents into tiny valleys. I gasped, I tasted blood and metal, my lungs heaved again and again like a bellows blowing on the coal of my cheeks, which were flushed with humiliation and indignation. Time trials are flat! I thought, I distinctly recall seeing one in the television footage of the Tour de France last year! Andy Schleck was in it, and it took place mostly on roads that bordered canals! They stretched from horizon to horizon with no more variation than a moderately rumpled bedspread! What the fuck is this shit, and what the especial fuck is this shit doing in Iowa, a land renowned around the world for flatness?

No one answered my questions—I had posed them silently, since I was unable to speak for gasping, and the only person I saw during my circuit was a Mennonite man driving a horse. In fact the Mennonite’s trap enclosed him completely, so I saw only his horse, and this horse wore blinders and seemed unusually focused on pulling his passenger and was therefore unlikely to respond to anything I asked him. By this point in the ride I had entered a delirium of despair, spiced with the extremely bitter knowledge that I would have to repeat the whole exercise tomorrow, in front of observers, and in the company of other cyclists.

On race day I was both nervous and early, a bad combination. I had arrived almost two hours before the start time (which I managed to miss anyway), which gave me ample opportunity to wander the grounds of the church, becoming more and more discouraged by the lean and angular cyclists who swarmed its grounds. I rode up and down a dirt road to warm myself up; my tires accumulated milky film of dust.

I walked past a group of young men, lean and sublimely confident, reclining on a blanket as if they were at a picnic. One of them rode a Ridley bicycle clasped in a trainer; I had never seen a Ridley anywhere other than on Competitive Cycling’s website, where I occasionally amused myself by seeing if I could order one for less than $5000. The rider wore those huge Dr. Dre headphones as he casually spun the wheels to a screaming blur; he dismounted with a callous insouciance that drove me to the point of tears with envy. “It’s Judas!” he told his friends, “she’s singing about Judas!”

I wait nervously for my start time. A trio of well-fed Iowans stands next to me, bikeless—they are here to support family members or friends. “This is the Juniors now, right?” I ask them. Across the street, lean teenagers talk with egg-shaped men in referees and judge’s uniforms. They shake their bikes, some kind of safety check. One of the trio tells me that they are, in fact, the Juniors. “If you want to ride with them you’re gonna need to shave,” he tells me. “Oh, crap,” I respond.

The category five riders assemble; they ride back and forth, near the starting line, warming up. I ride with them. I stop near the line and hear my number, 505, which causes a spasm of anxiety; I feel like I am the security checkpoint in an airport. “Did you call five oh five?” I ask. No one responds. I return to the end of the line. After a few minutes I ask another referee when I start. In a laconic tone that only Iowans can produce he tells me that I’ve already missed my time, and that I should report to the head of the line. The referees at the starting point are equally unmoved; apparently everyone misses his time. They place me behind two other riders. Each departs, winging down the road, standing in his pedals. A referee grabs my bike—“I’ve got you.” The judge counts down from 20. I am off.

Mile two: My start was strong; I descend a hill and climb its counterpoint, breathing heavily but in rhythm, relaxed, elegant, perched atop my steed like a general in a triumphal painting. Sheep pass to my right, penned behind wooden fences; they regard me and the other riders with equal indifference. I come upon the previous rider. My hands twitch; I move them into the drops, first right then left, I shift, I pass him, my wheels slash through the air like wasps stooping upon their prey. I race, I compete, I drop my opponents with the carefully controlled indifference of a sportsman, never insulting, always sure in my puissance.

Mile three: The cyclist I passed pulls abreast of me and, in a conversational tone, informs me that he is merely riding home from the morning’s race (26 miles on the same brutal course). He wishes me luck and gives me directions for the rest of the course. I gasp “thank you,” trying not to throw up. We have reached the least of the hills.

Mile four: Two cyclists, released 30 seconds and one minute after me, pass me. I imagine myself gesturing wanly to them, but in fact I am too winded to move my arms.

Mile six: Idea for a novel: struggling cyclist finds a wonderful restaurant in the middle of a race; stops racing, is able to sit down, is informed by the head of USA Cycling that he need never race again.

Mile eight: In the oncoming lane I see an enormous tractor with the proportions of a particularly imposing Greek temple. On a trailer it pulls huge yellow plastic vats of what I assume are caustic chemicals. A few more riders pass me.

Mile 10: I ride slowly past a farmhouse. In the yard, children play. A little girl stands up and faces the road, screaming, “Why don’t you just ride bikes for fun?” While she yells a handful of other riders pass me; I count a dozen. The next house is abandoned. Its screen door bangs against the siding, unrestrained by careful human hands. I assume that creepy murders take place behind the filmy eyes of the house’s windows; as I roll past I have the time to compose and reject four or five derivative horror movie plots.

Mile 11: I ascend a gentle incline. A black cat crosses my path, and then pauses in the driveway of a farm to look at me. “What are you doing, kitty?” I ask. The cat, disgusted, turns away. A lean man in a green New Pioneer Food Co-Op kit passes me. “Cheer up, it’s almost over!” he calls. “Almost!” I reply. I had seen him earlier registering for the age 50+ category, a group that started after the last category five rider had already embarked.

Mile 12: I pass some horses, who are sleeping at the edge of their pasture. My transit is neither violent nor swift enough to wake them. “Hello, ponies!” I call. Their velvety lower lips dangle in slumber. Around this time category five women begin passing me.

Mile 13:I climb the final hill, attempting to stand and failing like a bedridden man giving in to a long illness. At the finish line girls cheer and clap: I get in to the drops and manage a sprint that differentiates itself from my usual limping pace only by the elevation in my sense of nausea. As I cross the tape a rider passes me.

That evening, as I hang my knickers behind my bathroom door, a quiet joy suffuses me: the race is over, and I need never compete again. A few days later I take a leisurely ride along my usual route. On the bike path a goose stands on one leg, huge beyond belief. “Don’t do no bites, old goose!” I tell him as I pass. He opens his beak and hisses.