Everyone Should Read Jack Vance

At last, SF with a sense of humor and little pretension. 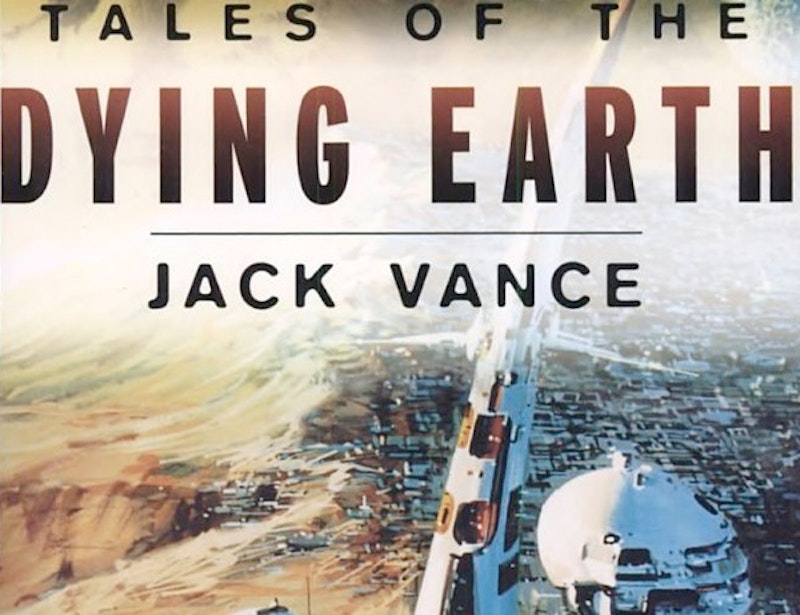 Last year, I wrote a long encomium to Gene Wolfe, an author of weird fiction who creates eerie, intricate plots and favors beautiful, archaic words. He also takes himself extremely seriously, writes only two kinds of dialogue (“serious male engineer-type” and “irritating”), and sometimes favors the intricacy of his plots over their quality. He has admitted that he wrote his magnum opus, The Book of the New Sun, to be read more than one time. Fortunately, it’s good enough to bear up under a few readings, but the idea is rather hubristic nonetheless.

I began reading Wolfe after dipping in to the novels of Jack Vance, another purveyor of science fiction and a man who invites comparison to Wolfe. After I ran through most of Wolfe’s catalog I returned to Vance. Vance has all of Wolfe’s strengths (save, perhaps, for Wolfe’s sometimes exquisite pathos) and virtually none of his weaknesses. Vance holds the rare distinction of being a science fiction writer with a sense of humor, and an actually good sense of humor at that. He also happens to be a superb prose stylist, employing in almost all of his writing a virtuosic, bombastic, thoroughly entertaining voice. Vance’s stories feature spaceships and aliens but he writes with a florid, baroque joy that wouldn’t be out of place in a 19th century-adventure novel, or in the perfumed letters of a fop.

Three things characterize Vance’s fiction: protagonists who are loveable rogues, intricately imagined societies filled with bizarre rules and customs, and 10-dollar words thrown about with reckless abandon. None of these motifs have any specific relationship to science fiction, which is a strength for those readers who might be turned off by yet another novel about technology. Vance’s characters rarely describe the wonders of science; they pilot riverboats and spaceships with about the same magnificent insouciance. In his novel The Dirdir, a character hires a team of engineers to construct a spaceship. Both the character and Vance imperiously ignore how the ship might actually work; in contrast, the novel’s direct sequel, The Pnume, goes into great detail in a description of a gambling game involving color-coded eels. Which would you rather read about: another warp-engine, or an eel race in which the house always wins? Vance certainly doesn’t include any Larry Nivenesque pontificating on physics. He writes mostly about character and conflict, and the whimsical or grotesque settings come in more as “why not?” demonstration of Vance’s abilities than as a substitute for strong writing elsewhere.

Most people begin reading Vance with his masterpiece, Tales of the Dying Earth, a collection of short stories and novellas all set in the same world (a world which readers concerned with genre might insist on calling fantasy thanks to the absence of lasers and presence of wizards). Dying Earth enjoys fame in some extremely nerdy circles for having inspired the magic system in Dungeons and Dragons—don’t let this, or the first third of the book, turn you off. Dying Earth begins with a small selection of nicely written but rather conventional fantasy stories, which are pleasant but nothing special. They contain a few unusual words, but are still mostly rooted in the fantasy/sci-fi tradition of an extremely capable protagonist who solves problems (usually violent, physical ones) with the application of magic or technology. If you take my advice and read through this volume you really won’t know what the fuss is about until you reach “Cugel’s Saga.”

If you have even a shred of humor and humanity you’re going to love “Cugel’s Saga.”  The two novellas follow the titular Cugel, a jerk who wanders around a picaresque and bizarre fantasy world generally pissing off everyone he meets. His adventures hinge on extremely selfish goals, and most of the conflict comes from his indelible opinion that he is the smartest man alive. Cugel diverges in a major way from the stock fantasy protagonist by a) not being particularly good at anything and b) being a complete, irredeemable cad. Cugel is something like an Elmore Leonard protagonist on Adderall—a little sleazy, kind of a loser, but (at least initially) kind of likeable anyway. Cugel, unlike Leonard’s melancholy characters, has an extremely high opinion of himself, one that Vance skillfully and repeatedly contrasts with the world’s opinion of Cugel, which is very, very low.

The setup is that Cugel gets maneuvered into robbing a famous wizard, who catches him and punishes him by sending him far, far away in order to retrieve a magical gewgaw (it’s a lens that gives a person who looks through it an idealized version of the world, like a beer goggle). The quest for the lens (which Cugel retrieves relatively quickly) is a pretext that lets Vance put Cugel through any number of dangerous and amusing situations: he dives for poisonous scales in a pond of slime as a way of paying off yet another hotel bill, he cares for a pair of giant seagoing worms that propel a ship, he neglects his duties as a professional lookout for a town that keeps paranoid watch on an apparently innocuous lake, and so on. The work accumulates a manic energy, as Cugel gets more and more weary and desperate and his already fallible morals slip even further; by the end of the book you don’t like Cugel, but you certainly admire his bloody-minded arrogance and his general panache.

It’s hard to pick out a Jack Vance quote that shows the verve and humor of his writing; you have to get into the rhythm of the prose and get to know the characters a little before their overblown statements start to make sublime sense. Taking Vance dialog out of context might lead the reader to believe that his characters are “prithee”-spouting ren-faire dorks; they aren’t. Most of them talk more like Victorian law clerks. Take this, for instance, from one of Cugel’s many arguments with service staff:
“This is tantamount to an insult,” declared Cugel haughtily. “Must we truckle to the whims of Huruska? Not I, you may be assured! I will settle my account in the usual manner.”

Of course this leads to misery for everyone involved, including Cugel.

Vance has written a great number of books, and many of them are out of print. Of special note are the Demon Princes novels. They constitute a very long narrative in which a determined, slightly bland protagonist hunts down intergalactic criminals who enslaved his parents. The books are filled with intricate detective work and well-handled (that is, short and light) action, and are generally delightful, though not as funny as Cugel. More in the Cugel mold is Showboat World, a novel that follows the cynical, selfish owner of a riverboat who goes from town to town putting on spectacular performances (many of which echo the Royal Nonesuch episode from Huckleberry Finn).

There is also the Planet of Adventure series (which includes the above-referenced The Dirdir and The Pnume). The second half of the tetralogy introduces one of Vance’s few truly vile villains, a depraved sybarite named Aila Woudiver, and shows that Vance can make you sweat for the safety of his more sympathetic characters. His most moving, and possibly best, novel is Emphyrio, a haunting story of a man and his son who live on a planet devoted to ruthless exploitation of highly skilled craftsmen. The boy and his father carve exquisite screens out of wood, and eventually they realize that there is something terribly wrong with their whole society. Blue Planet tells a similar story about a society that lives on enormous lily pads on an endless ocean, paying tribute to an enormous alien squid to protect itself.

This covers only a portion of Vance’s work, and although I’ve been striving diligently I haven’t been able to track down and read his complete oeuvre. I’ve liked every work of Vance’s that I’ve found, and suspect that many readers, even the ones who assume that they don’t like science fiction, will too.