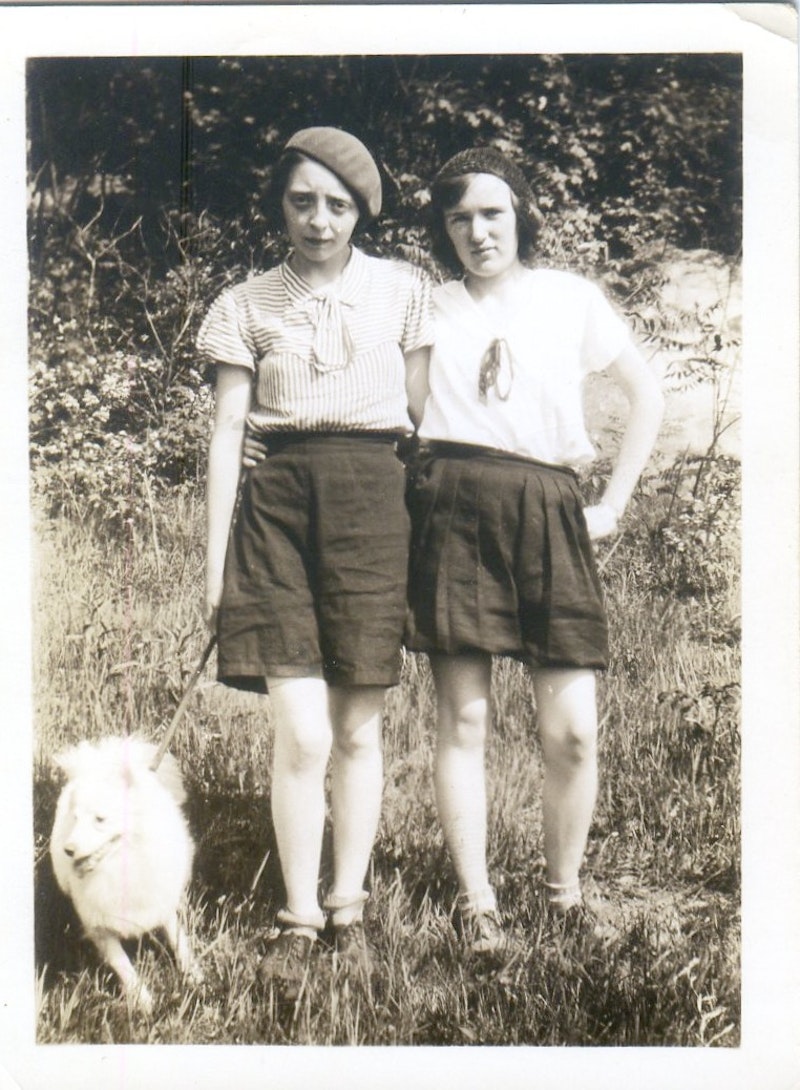 It’s a shame the photo above isn’t in color, for if it were I think deciphering the date, even the decade, would prove difficult.

Eleven years ago, Kurt Andersen wrote for Vanity Fair: “For most of the last century, America’s cultural landscape—its fashion, art, music, design, entertainment—changed dramatically every 20 years or so. But these days, even as technological and scientific leaps have continued to revolutionize life, popular style has been stuck on repeat, consuming the past instead of creating the new.”

As it happens, the picture of my mother (16, on the right), and a friend, Jeanne, was taken in 1933 at a camp on Long Island. I never heard of this Jeanne while growing up—probably a short youthful friendship, just as I’ve never mentioned to my kids some pals in the 1960s and 70s like Ann Robertson, Holly Miller, Doug Mazan, Timmy Greene and Jimmy Braun, to name a few—but she looks like a tough cookie. I wonder what ever became of beret-topped Jeanne with the tubby pooch, something I’ll never find out since she and my mom are now floating in eternity (a meaningful and rich destination one can always hope for—unless you’re a diehard Christian—but barely count on).

My point, however circuitous, is that these two gals, outfitted in garb that today would be au courant, or at least a standard uniform for baristas/musicians/writers/doctors on days off, might be mistaken for friends in Brooklyn, Austin, Boston, San Francisco, Pittsburgh or Cleveland, just off the top of my head. The hats (my mom’s looks Middle-Eastern; very unlikely at the start of the Great Depression, when the wave of immigrants were mostly from Europe, the Irish, Italians, and prescient Jews from Germany, Poland and the new Soviet Union) the shirts—Jeanne’s is especially cool—and footwear wouldn’t be out of place in any gathering of teenagers or young adults out on a lark. Today, if not the era I grew up in, it’s my guess that those shorts would fetch $100 or so in a vintage clothing store or from an online merchant. Perhaps I’m mistaken, but I think that’s what Andersen was getting at in his 2011 VF article (it’s a worthwhile hobbyhorse of his, as he’ll tweet about a current photo, noting, say, that without a certain new brand of sneakers, it’d be hard to distinguish the dress of those pictured from the 1990s).

Something that’s different in this photo from a similar one now is that without knowing it’s difficult to put an age on the pair. I’ve mentioned that my mom was 16 (and the contrast shown in a 1941 photo of her and my father that was published on Monday is stark); a carefree teen to a married woman (and a rather fetching one at that, if it’s not too rakish to say that about the person who gave birth to me in 1955) in just eight years.

I don’t know what the fuck Jeanne’s deal is: she could be a teen or in her 20s (maybe a camp counsellor) but whether true or not, she definitely gives off a Virginia Woolf/Eleanor Roosevelt scent, which needn’t be spelled out to modern audiences, but was rarely spoken of in those days, at least in America, except for famous artists who got a pass; just as my dad briefly mentioned one of his cousins to me, described as a “confirmed bachelor,” and as late as 1967, I heard my mom whisper to Dad, “Do you think Chuck is a homo?” and these were very tolerant people. The 1930s are thought of as a very, very demoralizing and debilitating decade for all but the wealthiest, where fun was as commonplace as a Democrat rooting for a President Ron DeSantis today, but that can’t be the whole story. Maybe like behind closed doors in Victoria’s England, where lots of lascivious behavior took place, there were similar hamlets of hedonism in Dust Bowl/Will Work For Food America.

My son Nicky and I looked at the above photo and wondered—very briefly—if Mom and Jeanne were a fleeting item. Who knows? Cool by me, that would simply add another layer to my mother’s multi-faceted and happy, if too brief, life. I’m indulging in fanciful thoughts here, but if you examine a complex photo like this from 1933, you’d be bereft of curiosity and perhaps mere intelligence, if you just sloughed it off. My mom sometimes spoke of her frustration as a young woman, with a traditional father from Ireland who didn’t believe “girls” ought to enroll at a college (she did anyway, at Hunter, but never completed a degree) and though her politics were conservative, with a schmear of libertarianism, she wasn’t averse to a protest vote; she went for Norman Thomas in 1948, probably assuming Thomas Dewey would crush Harry Truman. She happily voted for George McGovern in 1972—she was always against the Vietnam War, mostly, I think, because she didn’t want her sons involved—and then reverted to Ford in ’76 and Reagan four years later (her last election). Now, that’s a swing voter! If she was born in 1947 rather than 1917 my guess is that she would’ve been in the first wave of feminists, but that’s mere conjecture, for as much as I love the concept of time travel, the fact is you’re born into a specific era and that’s that.