Back to the Future

Margaret Atwood returns to science fiction with her trademark wit, insight, and style. 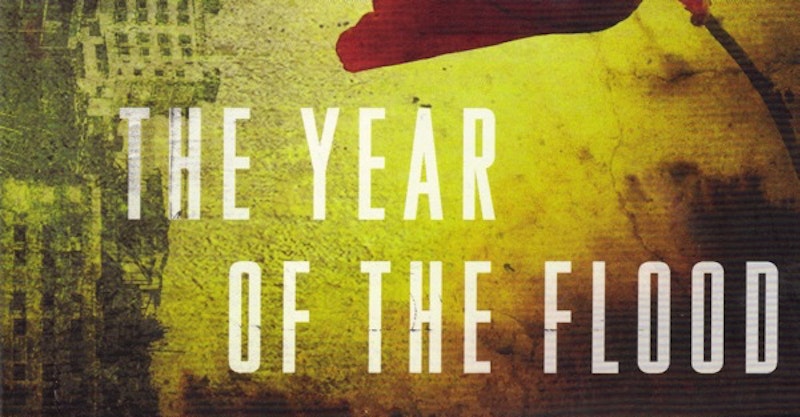 In Oryx and Crake (2003), Margaret Atwood wrote a post-apocalyptic adventure that is by turns biting, preachy, gloomy, derivative, action-packed, intimate, terrifying, and always terribly sad. She repeats this performance in The Year of the Flood, returning to the Oryx and Crake story with her outrage, sadness and sympathy intact.

The Year of the Flood works as a companion to the previous book, telling its story from new angles and (mercifully) taking readers just past the horribly suggestive cliffhanger ending of the first volume. In Oryx and Crake Atwood imagined a world in which the wealthy insulate themselves in scrubbed, biologically sealed compounds, in which the environment has been pillaged, where scientists have broken open the genetic bastion of life itself and ushered in an era of horrifically commoditized mutants and "splices." Her scientists combine goats and spiders to produce superior silk; they cross and sweeten raccoons and skunks to create "rakunks" as pets for the wealthy. They introduce multiple sets of human organs into enormous pigs, "pigoons."

Oryx and Crake covers this in great detail—it is a novel about compulsive and ridiculous tinkering that Atwood captures perfectly with the dime-store jokes of the transgenic animal names, and the parade of products and services ("AnooYoo" "ChickieNobs") that earn the genetic scientists their isolated, germ-free lives.

The novel comes to the reader through the acid-tongued self-pity of Jimmy, also called Snowman, a glib humanities type in a world ruled by "number people," and a perpetual second fiddle to the genius Glenn (called Crake), whose icy megalomania brings down the curtain on the human race. The story traces them from childhood through the pandemic that Glenn visits on the world. Jimmy tells the story from a tree in which he shelters from the genetic horrors that have inherited the earth.

The end of Oryx and Crake looks like the end of humanity, and possibly the beginning of something new with the Crakers, a tribe of gentle genetically engineered savages who Glenn/Crake has designed to replace barbarous, murderous Homo sapiens. The Crakers' urine repels natural predators, they eat nothing but plant fiber, and they mate promiscuously in biologically determined seasons. Atwood shows Crake's insanity and loneliness through his ostensibly perfect creations, who are in most ways grotesque and repellent despite their perfect adaptation and physical beauty. Crake's perfect man has reduced people to a set of efficient biological processes.

Oryx and Crake also includes rending scenes of more ordinary human degradation, a portrait of an only slightly fictionalized global sex industry drawn with Atwood's characteristic outrage. In Atwood's dire view of the world, women have long ago been made into consumer goods, just as her genetic scientists have made DNA itself saleable. Jimmy and Glenn spend parts of the first novel whoring their way through the world outside the corporate compounds, dosed with Glenn's custom-made super-antibiotics and insulated from the horrific world of the "Pleeblands" by Glenn's money.

The Year of the Flood tells the previous novel's story from the perspective of the pleeblands, and from the viewpoints of Toby and Ren, two women who play somewhat more modest roles in the apocalypse than whiny Jimmy and arrogant Glenn/Crake. Toby and Ren both survive the global pandemic told in the first novel; The Year of the Flood recounts their lives up to and past the plague, in their voices, with their sad and poignant reflections. Flood works best in tandem with the previous volume; you need not have read Oryx and Crake to enjoy The Year of the Flood, but there's no reason to deny yourself one or the other.

The narrators Toby and Ren are both members of God's Gardeners, a benevolent green-minded cult that believes in the sanctity of animal life and in the coming "waterless flood," a cataclysm that will wipe the stain of humankind from the earth. Their second article of faith receives direct confirmation in the fatal pandemic.

Atwood's description of the daily life and petty maneuverings of the Gardeners calls to mind her famous 1985 novel The Handmaid's Tale; if anything she paints the internal politics of the Gardeners more deftly than she did the insane and cruel lives of the Handmaids. The Gardeners impose many fussy, humorless rules on their adherents, but they do not enslave them, abuse them, or rely on violence. Members of the gardeners love and resent their society and its rules, something Atwood carries across in countless deft, small ways—Ren wistfully states "The Gardeners were like that: they would tell you to do something and then prohibit the easiest way to do it."

The Gardeners follow Adam One, a visionary who projects an aura of genial dimness. Each chapter of the book opens with a sermon from Adam One, followed by an atrocious doggerel hymn (sample titles: "Oh Sing we Now the Holy Weeds"; "We Praise the Tiny Perfect Moles"). When these repeated elements interrupt the action of the main narrative they become quite vexing. Atwood handles all levels of the plot with astonishing skill; by the end we know a large cast of characters very well, we know their pasts, and we see all of their paths intertwining; to break this careful braid with an admittedly note-perfect parody of the humorless earnestness of environmentalism seems unnecessary.

This skill also makes it practically impossible to pick a good quote to stand for the whole book. Atwood gives us richly textured personal relationships (Ren, one of the narrators, disposes of her unpleasant friend Bernice in favor of the much more pleasant Amanda), intricately imagined geopolitical systems (a universal government that grew out of private corporate security and that disposes of certain classes of criminal through a game called "painball"), plenty of ecological discussion (some of it quite heartbreaking), a few coming-of-age romances, savage satire of consumer culture, and also severely post-apocalyptic adventure stories. Where to find a quote? Here's one that reminds me of Atwood's first novel, The Edible Woman:

It was my first April Fish without Bernice. We'd always decorated a Fish Cake together when we were little, before Amanda arrived. We'd fight all the time about what to put on it. Once we'd made our cake green, with spinach for the green colour, with eyes of carrot rounds. It looked really toxic. Thinking about that cake made me want to cry. Where was Bernice now? I felt ashamed of myself, for being so unkind to her. What if she was dead, like Burt? If she was, it was partly my fault. Mostly my fault. My fault.

Atwood has a rare gift for folding her big ideas into finely-crafted narratives that would be equally interesting without their profundity. The Year of the Flood continues her decades-long study of male violence, the power of sex, and the flimsy rationales and shameful desires that drive most people through their daily lives. That she can meditate on these themes and still tell a gripping story is extraordinary. The Year of the Flood is a smaller and more finely grained book than Oryx and Crake; its apocalypse is less total and less severe, and it does not reach the towering, Boschian heights of its predecessor. But perhaps by trimming away the exciting technological speculation and by tempering the end of the world with a few dim rays of hope The Year of the Flood excels Oryx and Crake—it is more real, and thus more frightening.