Love him, hate him, forget him: Brett Favre just wants to play football. 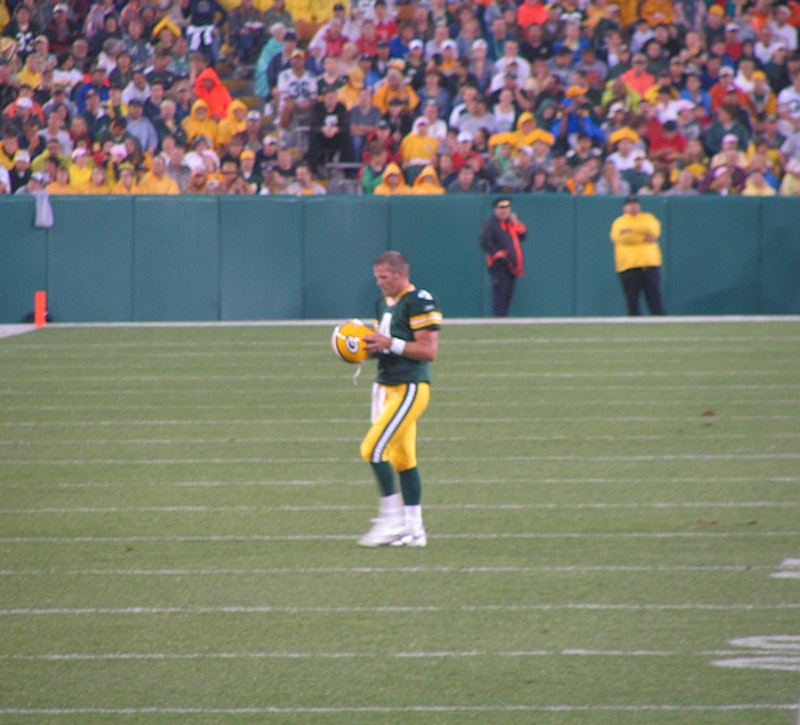 Brett Favre is like the kid who graduated from high school but still shows up at all the parties. He’s the NFL’s version of David Wooderson from Dazed and Confused, and even though his graying five o’clock shadow causes him to stick out on the sidelines, he still maintains an aura of “cool” that goes unmatched by his peers.

It’s strange that someone who has been a key figure in the NFL for 18 years seems to stand out in the crowd. While media bashing of Favre’s repeated retirement claims and unexpected returns to the gridiron play a role in this phenomenon, a more significant factor is his status as a historical professional football icon.

Favre is an old man in a young man’s game. According to the NFL, the average career length of a professional football player is about 3.5 seasons. Young players are constantly cycling into the system, making their mark, and eventually retiring as the new squads enter the league. Although quarterbacks tend to exceed this limit, few if any professional QBs retain their starting position and create such an impact on the game the way Favre has. Favre’s teammates and opponents, with a few exceptions, watched him play before they started their NFL careers. He was a source of inspiration for many of today’s players when they were first strapping on their pads for Pop Warner leagues. It comes as no surprise that Favre remains slightly alienated from this group.

This sense of distance is exemplified by the new feature on the FOX Sports website, The Favre Cam. The feature was installed at the start of the 2009-2010 season following the boom of media attention directed at the veteran quarterback during his negotiations with the Minnesota Vikings. During this period, Favre became a bigger behind-the-scenes figure than ever, gaining a celebrity status in the process that the previously humble superstar had never attained. FOX Sports understandably sought to capitalize on this.

The Favre Cam is exactly what it sounds like. A user logs on to the FOX Sports website, clicks on the link, and a window pops up with live streaming video focused exclusively on Brett Favre. It shows him playing the game, it shows him during those intermediate moments after a hand-off or a pass, and it shows him watching from the sidelines. It was presumably added as a continuous paparazzi tactic that allowed fans and bashers alike to constantly observe the player who had become such a well-known NFL figure. However, The Favre Cam seems to have the opposite effect for which it was intended.

I log on to “The Favre Cam” whenever I watch a Vikings game—initially out of curiosity, eventually out of habit, and now out of fascination. In that process, I’ve started to study the habits of the NFL legend that I have simultaneously cursed and admired since he defeated the New England Patriots in 1997. When he’s not playing, Favre is pretty boring. He claps occasionally. Sometimes he wears his helmet, sometimes he doesn’t. Every once in a while he’ll walk to the bench to get a drink of water. But one thing I’ve noticed about Favre through this voyeuristic Internet feature is that he is almost always alone. Players pass him by, occasionally slapping him on the shoulder pads, but rarely does one see him actually interact with his teammates for more than a few seconds. These mannerisms stand in stark contrast to a player such as Tom Brady, who is seen constantly consulting with his receivers and coaches, especially his close friend Randy Moss. But Brady is also a New England insider. He’s been on the Patriots for nine years, earned three Super Bowl rings, and developed a firm relationship with his players and fans.

Brett doesn’t have that anymore. He no longer has the diehard fan base he attracted through his years at Green Bay. He’s on a new team full of players with whom he’s had limited interactions. He is the lonely legend of the NFL, silently observing from the sidelines and waiting for his signal to step on the field.

While this may seem disheartening, it’s the truest insight to the psyche of Brett Favre that I’ve ever seen. He isn’t in it for the money anymore. He isn’t in it for the fanfare or the glory of the press. His constant gaze on the football field demonstrates that his ultimate desire and purpose is to simply play football. In an industry dominated by contract negotiations and celebrity antics on and off the field, Favre gives fans a refreshing taste of the old breed of players who played the game simply because it was a part of them that they couldn’t give up.