Someone Stop the Stars

American sports commentary is overrun with hyperbole and fawning, and it's hurting the games themselves. 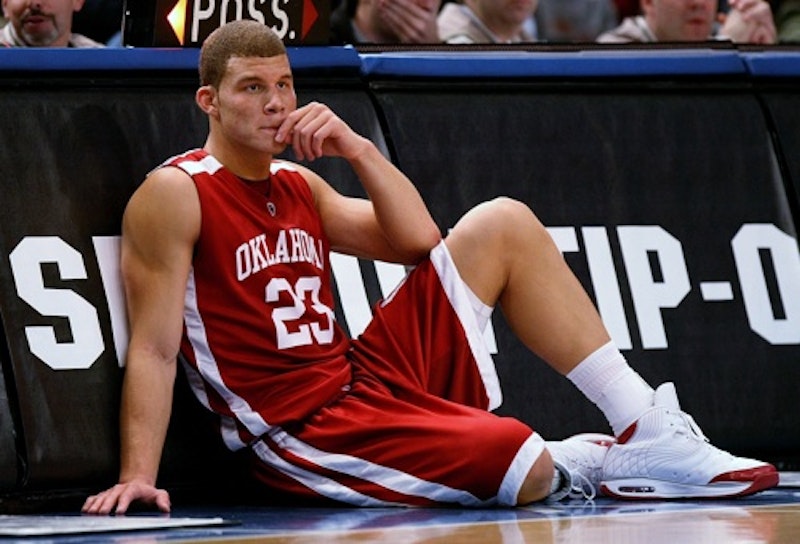 The sturdy, deadening stench of losing had descended on the packed bar in Ann Arbor, where a cadre of students and recent graduates just watched their beloved underdog University of Michigan basketball team take on the University of Oklahoma. I sat there, trying to bludgeon the irrational frustration—it was, after all, a blessing for the team to have come this far—with pitchers of Miller Lite. While the beer may have distracted me from the annoying game, and even blurred the score, there is one thing that the beer was unable to accomplish: make Tim Brando shut the fuck up.

Tim Brando, you see, is a rather detestable, hyperbolic game announcer for CBS. Brando is an in-game part of The Machine, an endless, symbiotic collective of sports announcers, commentators, talking heads, and columnists that decide what THE STORY is for each game or season and beat that story into the ground with a cartoon-sized hammer.

In her farewell column as ESPN’s ombudsman, the brilliant Le Anne Schreiber broke down the trends she found among the tens of thousands of e-mails she received critiquing the hegemonic sports network. The greatest concern was ESPN’s tendency to overplay and over-cover a small amount of teams and storylines. BONDS, MANNY, A-ROD, SPYGATE, YANKEES/RED SOX, PEYTON CHOKES—these are examples of THE STORY from years past. Ask any diehard sports fan if they knew that Jerome Bettis was from Detroit—it will elicit an exasperated sigh, formed by the sports media’s apparent pre-Super Bowl XL decision to expose sports fans to endless stories about how Bettis was born and raised in the same city as the Super Bowl. Here’s an example. Oh, and here and here and here. You get the idea.

When Bettis’ Steelers ended up winning the game, Bettis was front and center in the resulting coverage. The commentators mentioned his lackluster performance in the game, but Bettis should never have featured so prominently in the coverage in the first place. He was a second-string back getting minimal short-yardage carries throughout the season. He nearly derailed the Steelers’ championship run when his fumble was nearly returned for a season-ending touchdown (famously causing a fan’s heart attack). Bettis became a bigger story than the team, and when that happens, sports fans suffer. Important storylines get brushed aside; everyone remembers Bettis’ role in that Super Bowl, but few remember the prominent role of the horrendous officiating that produced one of the worst championship games in memory.

While it’s frustrating to have these useless storylines crammed down my throat, there is a simple solution: stop watching all the sports shows. And that’s exactly what I did. I stopped paying attention to most commentary and only have to suffer the frustrating trends for the two to three hours I spend watching an actual sporting event. That doesn’t mean that I don’t get just as angry listening to Fox’s Thom Brennaman fawn over Heisman-winning University of Florida quarterback Tim Tebow by saying, “If you're fortunate to spend five or 20 minutes around Tim Tebow, you're better for it,” during this year’s National Championship Game as if Tebow was a modern-day savior.

There is one sport, though, where I get very, very nervous about these storylines and what they can become. That’s basketball. And that’s because I lived through the 2006 NBA finals. In this genius piece, ESPN’s Bill Simmons explains the terrifying reality behind the middle games of those finals. Bad refs, he explains, can be swayed by noisy home crowds and especially by star power. It’s easy to spot the bad refs during the course of a game—they interrupt the flow, you find yourself scratching your head during multiple calls, the players become visibly upset after several calls, the refs sort of lose control, and everything just feels… off. Tim Donaghy aside, I remember that 2006 Suns-Spurs playoff game and it was awful to sit through, it felt as if The Man had intervened against the Suns at all cost. It was bizarre.

Basketball is at the mercy of its refereeing in a way that is unlike any other sport. It is the only sport where referees can grant uncontested opportunities for points, and do so dozens of time each game. There is so much contact in basketball that quality refereeing can never really be about enforcing the rules to the letter but must be an attempt to maintain consistency for all players and teams, as well as not having a visible effect on the game.

Since the time of Michael Jordan, NBA stars have routinely gotten the benefit of the doubt when it comes to contact fouls. This is especially beneficial to players that thrive off driving to the basketball or playing near the hoop—where contact is mostly routine and shooting fouls most commonly awarded. Thus, in a star match-up between driving players Shaquille O’Neal and Dwyane Wade of the Miami Heat against the Dallas Mavericks’ outside shooter Dirk Nowitzki, as it was in the 2006 finals, the former are always going to benefit from poor-quality refereeing.

Unfortunately, as prognosticators grant star-status to younger and younger players, this phenomenon has trickled into the college ranks. This is where the worlds of crappy refs and crappy coverage collide. Leading up to the Michigan-Oklahoma game, star power forward Blake Griffin, thought to be the number one pick in this year’s upcoming NBA draft, was anointed THE STORY. I became a little nervous when I read about the brutal foul on Griffin in the previous game. Would the refs, aware of Griffin’s star power and the recently publicized hard foul on him, treat him with kid gloves? Would they give him the benefit of the doubt that can shift the tides in the momentum-dependent NCAA tournament? Would Michigan be allowed to touch him? I got my answer early on, and just to clarify that it wasn’t the TV playing tricks, Michigan’s normally even-keeled head coach, John Beilein, got a technical foul while yelling at the refs for allowing Griffin to run over Michigan players without penalty.

To be clear, Oklahoma was the better team and Griffin was outstanding; Michigan did not and should not have won that game. But it was still awful to sit there and watch Griffin run over double teams and be awarded foul shouts for what Michigan blogger Brian Cook described as “someone look[ing] sideways at him.” This then got compounded with Brando’s constant yammering about Griffin’s brilliance, while refusing to acknowledge the cushy treatment he was getting every time he went to the lane. At one point, Brando, apparently forgetting the likes of Jordan, Wade, O’Neal, Carmelo Anthony, or even someone like last year’s tournament star Derrick Rose, described Griffin as a “once-in-a-lifetime talent” during the two-hour lovefest.

This was Blake Griffin’s game, and there was nothing I could do stop it. All I’m saying is we need to get some new basketball refs and sports historians, and I’ll finally be able to sleep soundly again.