No Music in Michigan Stadium

A plea for Michigan Stadium to halt its new piped-in music policy. 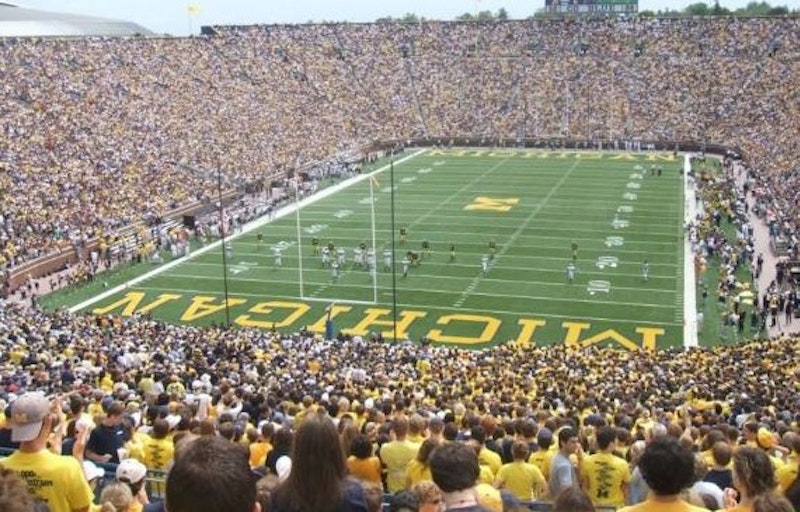 A few years ago, I had the bizarre pleasure of watching the University of Michigan football team handily defeat Indiana University's in Bloomington, IN. I say bizarre because victory rings just a bit hollow in a half-empty stadium after a 34-3 smackdown. The win felt inevitable and when it was, relief rather than joy was the emotion of the hour. The experience did, however, provide my friends and me with a long-running inside joke. Before opposing third downs, the stadium's sound system began playing the intro to AC/DC's "Hell's Bells" while the announcer-in his straight-laced announcer voice-belted, "Heyyyyy Hoosier fans, it's THIRRRRRRD down!"

The small crowd predictably didn't respond, and the whole ploy came off as a cheesy attempt to induce a legitimate game atmosphere. A week later, in Ohio State's Ohio Stadium, the same song came on during third downs-minus the hilariously dissonant announcer-only to be drowned out by the 90,000-plus fans already yelling at the field. My friend and I looked at each other when it came on, laughing at the Indiana memory and wondering why the booth at the already-imposing stadium felt the need to pipe in tunes.

I've been to over 20 different sports venues in my life, and all but two of them, Michigan Stadium and Yost Ice Arena (Michigan's hockey arena), used music over the loudspeakers to get the crowd into games. I have almost never seen it work. Some venues (the Detroit Red Wings' Joe Louis Arena is probably the best example) throw so many different song clips that the fans seem confused by the music cues. During my visit to Joe Louis, the crowd started to get loud at a critical moment in the game. When the hapless booth tried to build on the noise with some generic 80s hair metal, the crowd froze, seemingly unsure of what to do, and by the time play started back up, the crowd's energy had been converted into timid silence. For what it's worth, the opposing team almost immediately scored a game-tying goal. They would eventually win in overtime. Nicely done, booth operators.

One of my favorite things about Michigan Stadium has always been its gimmick-free approach to the game day experience. College football is separated from most other American sports by the sheer age of its traditions-its rivalries can go back over a century, and its mammoth stadiums often predate the existence of the NFL. Walking into Michigan Stadium is like stepping back into 1948, 1969, or 1997. There are no ads on the stadium walls. The scoreboard doesn't look all that new. Even the brand new luxury boxes look like they've been there for ages, and they're not even done yet. It's an exercise in living in the past, the present, and the future. I hope that in 2029, my children's experience with Michigan football is fundamentally the same.

Recently, for the first time, Michigan Stadium began playing the occasional piped-in song during the game. It had been a point of pride among a population of Michigan fans that noise during the game comes from two places: the marching band and fans themselves. It fits with the stripped-down, hand-me-down tradition of the program. We aren't the consistently loudest fans in college football, but we at least know when we need to cheer. The moments that have given me chills, the earth-shaking crowd reactions that sear a sports moment into your head, are not spurred by a booth operator's clever song choice. They are the first play of a Michigan-Ohio State game, where no music on earth could compete with the roar of the crowd. It's the final play of last year's Texas-Texas Tech game.

Sometimes piped-in music can be powerful, when it's employed as a tradition, for instance. If you were making a case for outside music, exhibit A would probably be the bloodcurdling, rock-your-fucking-face-off entrance at Virginia Tech. Wisconsin's "Jump Around" is one of the most fun traditions around, and Penn State's quaking Zombie Nation made me think I was actually going to fall out of the stadium. But in these rare instances, the music isn't taking over as filler, it is a signature. When Michigan beat Penn State in 2007, the Michigan student section began jumping up and down, singing "Zombie Nation" and replaced the words "We are Penn State" with "We own Penn State." That's what we associate with them.

At any rate, those are sounds that would happen regardless. Most piped-in music tries to keep the fans attuned or get them loud when they aren't reacting. It's built as much for Ohio State third downs as the fourth quarter of a 55-0 beating of Eastern Michigan. And that's what kills me. Before last week, Michigan Stadium was possibly the least sanitized venue in sports. We may not be loud all the time, but when we are it means something. The truth is we shouldn't be getting loud at the end of a 55-0 blowout. That's not our identity and there's no need for it.

There are amazing moments unperturbed by sound, though, that will always stick with me and could have only happened in Michigan Stadium where the band knows not to intrude. They aren't good moments. It's the crowd so quiet that I could hear the final kick get blocked when we lost to Appalachian State. It's the sickness in my stomach that was ratcheted up by the silence of 110,000 as Ohio State marched for a come-from-behind victory in 2005. That silence, awful as it was, is a beautiful if troubling memory. Music could have easily ruined it. Sports are as much about the raucous, glorious highs as about the sickening, quiet lows. But when you overcome that tension, when the silence of fear becomes the frenzy of victory, you get something pure like the end of Penn State or the 17-point comeback against Michigan State. Those moments are dictated by people; not the decisions of some silly booth operator. Please, Athletic Department, keep the tradition alive and leave the piped-in music to the others.