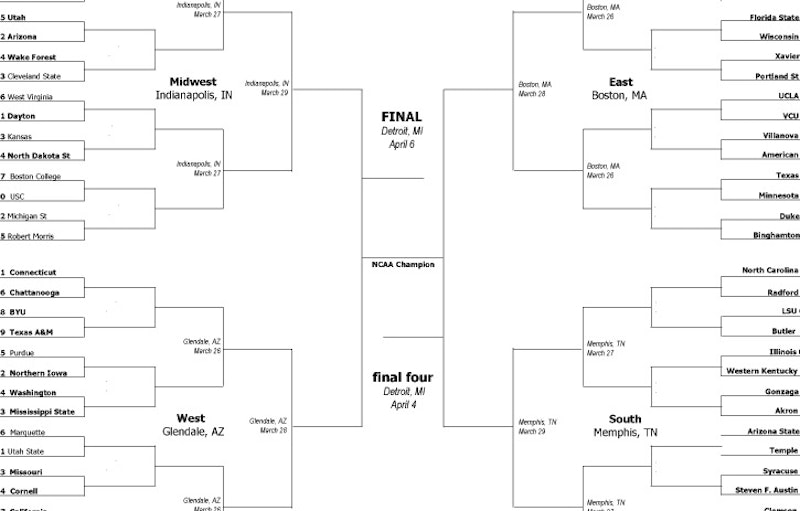 I saw then-point guard Jerret Smith the next day and he looked really sad. He was carrying a Styrofoam box from the only borderline edible Chinese food at the University of Michigan Union’s food court—a sure sign that he had stopped caring about the world. Frankly, I didn’t blame him. On that cold March day, I think we all had stopped caring.

The 2005-2006 Michigan basketball team crumbled at the end of what had been an otherwise stellar season. But I was convinced we still had a shot. We would make it to the NCAA tournament for the first time in nearly a decade. The coaches and players seemed cautiously confident that we would get our chance. But anyone familiar with then-head-coach Tommy Amaker’s tenure at Michigan should have known that his inability to understand what was happening in a game would probably translate into real life, too. We missed the tournament. The next day I saw Jerret, and I almost gave him a hug.

Each year, the finales of two of the most-watched national sports are crafted by a bizarre string of brief regional playoffs and a group of subjective interpreters arguing over things like “Is this loss to Grand Valley State worse than this loss to Iowa?” as well as a series of jargon-laced acronyms like SOS, RPI, W-L. Boxing champions are decided by judges because most of the time fights don’t end in a knockout and somebody’s got to pick a winner. But determining a champion for college basketball and college football—sports with clear, objective winners—somehow requires an even murkier set of subjective reasoning, faceless judges and little-discussed computer algorithms.

I know I’ve already bitched about college football’s finale, but let it be noted that the home page for the creator of the linked ratings system includes a bizarre plea for Indiana to align itself in the central time zone. We’ve entrusted college football championships to someone whose website looks less professional than the one for the Heaven’s Gate cult, which presumably hasn’t been updated in about 12 years.

Yet, college basketball’s unscientific method seems so… acceptable. Take a look at this year’s tournament bracket. Why, look there in the bottom right corner, it’s a deserving Michigan team! Oh, and there are numerous other teams that probably won’t win a single game but definitely deserve a shot at the title—I’m looking at you Cal State Northridge Matadors. Having all these teams is fun, and because it is a near-statistical impossibility that any of the last teams in will win the whole shebang (the lowest seed ever to win was 8), the fun is rather harmless.

It may seem like the system is humming along perfectly, but go ahead and take a look at that bracket one more time. Who is that playing Louisville there in the top left corner? TBA? That’s no college I’ve ever heard of. And wait, what’s that there in the bottom—Alabama State vs. Morehead State? The answer to that question is the great untapped resource of the NCAA tournament: the play-in game.

No one really cares about the play-in game, and it rarely counts as little more than a tie-breaker in most fantasy brackets. Yet, I find myself fascinated by this game. Two teams that didn’t quite make it all the way in have to duke it out for that final tournament spot. They have to earn their way into what is most likely a blowout loss to a powerhouse. Every so often, NCAA movers and shakers talk about expanding the 65-team field to 128, making room for every team who could even think about playing in the tournament and adding to already lucrative profit margins for the event. This is a little much, as that many teams could begin to dilute the quality of play for a lot of the mid-level games, as well as add nearly a week to a postseason whose timing is just about right.

We can do better. There are 30 spots for conference champions in the field (the 31st conference champ is the loser of the play-in game), leaving 34 open for at-large bids. I say we add a play-in game for each of those 34 spots. This would give 34 more teams a shot at the title—a more manageable number than doubling the entire field, but one that would also prevent the situation of an overextended tournament. It would also add some luster to the big-time conference tournament whose finals often have little effect on the championship tournament.

For instance, if your team plays Pitt, a number one seed, your team would be the lowest ranked team of all fresh at-large teams. But, if the team beats Pitt in the play-in game, they get that number one seed and a shot to play a number 16 seed—which will still automatically be in the tournament as they are always low-level conference champs. Since the worst teams in the tournament are the low-level conference champs, the additional 34 teams will be much stronger, except toward the very bottom, which would keep the system from actually punishing any of the highest-seeded teams who didn’t win their conference tournament.

There hasn’t been a major change in college basketball postseason in nearly 25 years. Largely, I think the current system has been a success. Yet no one was necessarily upset with the previous system, and the tweaks really made everything better. We could have one more glorious day of basketball, while simultaneously increasing the importance of the conference championships and regular season, since teams would need to achieve high rankings to protect themselves from middle seeds in case they fail to win their conference championship. More teams, more games, more pressure, more craziness—let’s make March even madder than before.