It’s a lost year for the Red Sox and owner John Henry will feel it in his wallet. Silver lining: the fair-weather Sox fans will disappear. 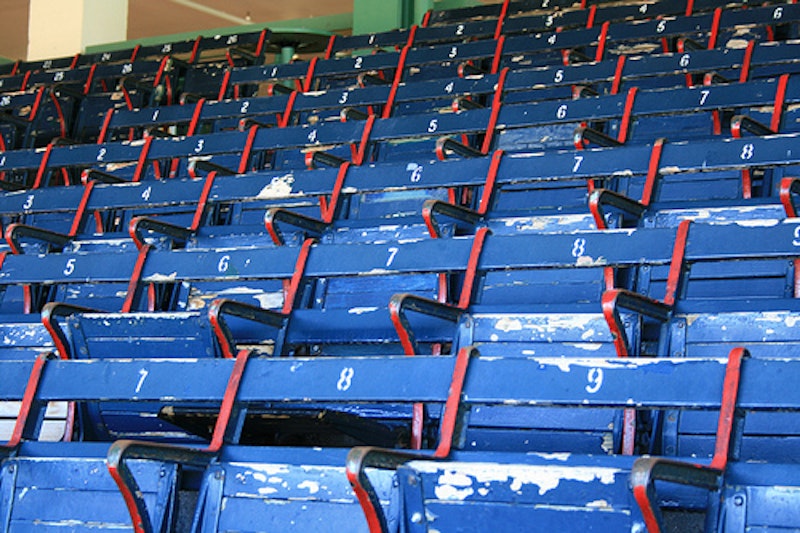 Perhaps you saw a curious story about the popularity of Major League Baseball teams that bounced around the Internet last week, originating in The Wall Street Journal and then picked up by countless sports blogs, television stations and daily newspapers. The bulletin was that the New York Yankees—contrary to the expectations of most who’d even considered the question—was not the most disliked franchise, nor the second, third or fourth: this insult went to the innocent Cleveland Indians, surely causing tears to fall from Chief Wahoo’s eyes. In fact, according to this narrow branding survey, with Nielsen Co. using an algorithm based on keywords, the Yanks were only the fifth most disliked, behind the Tribe, Red Sox, Reds and Astros. Is it possible that baseball’s reigning dirtball, Alex Rodriguez, has averted the media’s eye for long enough that he’s no longer the catalyst for bringing out Yankees-haters across the country?

Although this survey is certainly an outlier—really, in addition to the Indians, who has strong feelings one way or another about Cincinnati’s Reds?—as one of those insufferable Red Sox fans I was mildly chagrined that at least by the above measure the team I’ve rooted for my entire life is now less popular than the still aptly named Evil Empire. Funny thing, though, I get it, and was reminded why last Friday night when my son Booker and I saw the beleaguered Orioles (number eight in unpopularity, probably as a result of team owner Peter Angelos’ employees hacking into the Nielsen computers and “stuffing the ballot box”) humiliate the Sox with a walk-off 10th inning win. (The Birds deserved to win; it wasn’t their team that stunk up the field with shoddy defense and stranding runner after runner. And they also played like confident champs in sweeping the Sox over the weekend, the first time that’s happened since 1998.) This is not a Red Sox year, and I hope general manager Theo Epstein will be held accountable for his questionable off-season acquisitions, or lack thereof, that have reduced the team to a bantamweight squad that rarely manages more than eight hits a game.

John Henry, the Sox’s principal owner, cannot be a happy man, for though he loves baseball, it’s safe to say the billionaire (a proud liberal, by the way; a gratuitous aside, granted, but I’m in a grumpy mood) loves profits even more. And the Sox, who’ve sold out Fenway Park for an MLB record-setting 763 consecutive games (as of May 2), are headed to an unfathomable .500 season, which means the sellouts will end, the revenue stream slows down, and disgust will envelop the greater New England territory all summer long.

Yet there’s a silver lining here. As I explained to my friend Rick, who, like yours truly, began following the Sox in the early 60s—pre-Cinderella Team of ‘67—maybe the legions of bandwagon-jumping Boston fans who only came to the party after the World Series drought ended in 2004, will move on to a more au courant, winning team. I don’t begrudge anyone who’s willing to shell out the cash for an MLB game their rooting preferences; it’s just the vocal know-nothings that make my ears burn. At that game on Friday, for example, a guy behind me, decked out in Sox gear (and, for the 81st time, I’m obliged to repeat the opinion that it’s just weird that anyone over the age of 17 would actually wear a facsimile jersey bearing a player’s name), stood up and cheered when Dustin Pedroia went deep and narrowed an O’s lead to 3-2. I felt the same way and we started chatting, an exchange that ended awkwardly when he asked, “So who’s the guy that plays some third base and also fills in as designated hitter?”

That would be Mike Lowell, buddy, the ’07 World Series MVP, a fine player now so hobbled by a bad hip that he needs a wheelchair to get to first base, and will surely be cashiered by Epstein in one form or another in the coming months. Anyway, you know what I mean: how can someone claim allegiance to a team if he or she doesn’t even know the roster and very recent history. It’s embarrassing.

Upon arriving home that night, several emails were awaiting from Rick—I don’t text or email while at a ballgame—expressing his disgust at onetime gold-glover Adrian Beltre’s lousy defense, the lack of a reliable bullpen and, of course, the sad emasculation (metaphorically, at least) of David Ortiz, once the toast of Boston but now referred to as “Big Popup” rather than “Big Papi.” In one sense, Rick’s fortunate since he also follows the Boston Bruins, which provides relief; I’m a one-sport guy and it sucks that the Sox’s season is, barring some extraordinary luck and smart trades, over and out. No sympathy is expected from these quarters—especially here in Baltimore, where winning baseball is a vestige of the 20th century—but it’s not a lot of fun.

Rick put it best for those of us who’ve rooted for the Sox since way before the Monster Seats and the run as America’s Team: “Welcome back to the Frank Malzone era and a decade of ineptitude.” I responded that at our age, that’s some mighty grim speculation, and he parried back, with a lawyer’s no-horseshit directness: “Well, did you really believe the Sox would end the drought in our lifetime?”

It’s obvious to everyone but the Sox’s skipper Tito Francona that Ortiz has to go, meaning an outright release, since the once-lovable lug is sucking all the oxygen out of the team’s clubhouse. Younger stars like Pedroia, Jon Lester, Kevin Youkilis and the DL-hobbled Jacoby Ellsbury most likely wouldn’t go public with such a sentiment, but when your club’s “slugger” is batting .159 with three home runs and six RBI’s, clogging up a spot on the roster, it’s certain that’s what they’re thinking. As players invariably say upon being traded or scoring an especially lucrative contract—Ryan Howard’s five-year, $125 million extension just the latest example—the game is a business first. And sure, Ortiz and his dwindling number of believers will bad-mouth the organization, but that will pass in time, for his place in Red Sox lore is secure.

The Sox play the Angels and Yanks at Fenway this week, and I suspect if they win even two games it’ll be considered a success in this sudden time of lowered expectations. And then, after the carnage is complete a week from now, David Ortiz will be designated for release.